At dusk on Friday of last week, 3,000 protesters met in Plaza Libertad and marched through Uruguay’s capital, Montevideo, to demand the freedom of four activists detained under sedition charges. The four were arrested during a demonstration against the Free Trade Area of the Americas (FTAA) a week earlier. 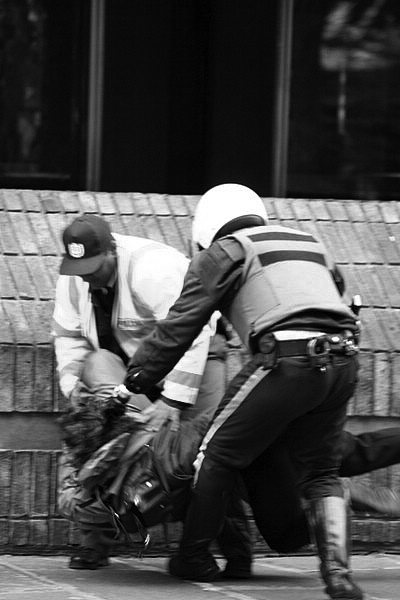 That demonstration came in response to the Summit of the Americas, held in Mar del Plata, Argentina, where George Bush met other leaders to discuss the free trade deal. Activists in Monetvideo marched to oppose the deal, their protests coinciding with similar actions across the continent.

In the afternoon, hundreds of young people opposed to the FTAA marched through the financial district of the Montevideo blockading the environment office, the stock exchange, a McDonald's restaurant and several banks. They were in costumes with their faces colourfully painted. They played musical instruments, sprayed graffiti and chanted slogans against capitalism, Bush and globalisation.

About ten people with their faces covered joined the march and attacked several business with stones. The demonstrators didn't understand what was happening, and the police watched without doing anything. After 30 minutes the stone throwers disappeared and the riot police then attacked the demonstration. People were brutally assaulted by police, and by civilians who acted in collusion to them.

Some protesters were hospitalised after suffering fractured limbs and other injuries. The police went on the rampage through the downtown area of Montevideo, detaining more people, including some who didn't participate in the protest but who intervened in defence of those attacked by police.

Last Sunday judge Fernández Lecchini charged four demonstrators with sedition, based in a penal code article imported from the fascist Italy in the 1930s.

There was no attempt to prosecute protesters for the broken windows or other damage to property because the judge could not prove that the demonstrators who appeared in court broke anything.

In fact, none of those charged participated in such violent acts — they only resisted the blows and the kicks aimed at them by the police. One of the detainees had a broken arm.

Resisting police violence was also considered a crime by the judge and this, added to the charges of sedition, could mean two to six year jail sentences.

The four activists are prisoners for their ideas, for the aims of their demonstration — to protest against Bush and the FTAA. And these charges have been imposed under a left government which has sought to justify the police actions.

Right wing parties in Uruguay are weak, having lost control of the government, and now it is the judges and police who lead the attacks against the movement.

But the campaign for the freedom of the four political prisoners — Carlos, Lilián, Ignacio and Fiorella — has begun. Maybe the progressive government's first defeat won’t come from the right, but from those who are on the left of the left.