Lying bastard Blair has to go 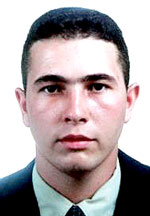 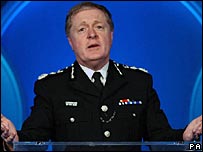 The British police force can't be trusted as long as we have a liar in charge. Ian Blair is a disgrace to the law and the British legal system. Ian Blair a policeman, head of the British police keeps saying shoot to kill should be looked into, but only when he is criticized because he is corrupt and the police who served under him are murderers.

The Jean Charles de Menezes family are campaigning for shoot to kill to be banned. Metropolitan Police Commissioner Sir Ian Blair repeatedly blocked a campaign against shoot to kill, and he lied and blocked an investigation into the murder of Jean Charles de Menezes. Ian Blair is trying to shift the blame from himself. Charles Clarke and Tony Blair allow this monster to continue to be in charge of the British police and make a mockery of any justice of the law. But New Labour want a police state and Ian Blair is part of their corruption.

Shooting one bullet into the head of Jean Charles de Menezes would have killed this innocent young man. A sign of British police state brutality is that they shot a disarmed, pinned down, man several times in the head. Ian Blair’s police used illegal, internationally banned expandable bullets. Ian Blair and Charles Clarke must have authorized this, the weapons were paid for with British taxpayers money.

Copyright 16 November 2005, this may only be reproduced in full and with permission. This article can only be used to support the campaign against shoot to kill, and the campaign for Ian Blair a corrupt lying Police Chief to resign.

http://www.telegraph.co.uk/news/main.jhtml?xml=/news/2005/11/16/nmenez16.xml&sSheet=/portal/2005/11/16/ixportaltop.html
Police used 'dum dum' bullets to kill de Menezes
By John Steele
(Filed: 16/11/2005)
The Brazilian man shot dead by police in the mistaken belief that he was a suicide bomber was killed with a type of bullet banned in warfare under international convention, The Daily Telegraph has learned.
The firing of hollow point ammunition into the head of Jean Charles de Menezes, 27, is believed to be the first use of the bullets by British police.

It will re-ignite controversy around the shooting, at Stockwell Underground station, south London, on July 22.
Modern hollow point bullets are descendants of the expanding "dum dum" ammunition created by the British in an arsenal of the same name near Calcutta, in India, at the end of the 19th century and outlawed under the Hague Declaration of 1899.

The bullets, which expand and splinter on impact, were available to officers taking part in Operation Kratos, the national police drive against suspected suicide bombers which has been described as a "shoot to kill" policy.
Their issue was sanctioned after research suggested that they were an effective close-quarters ammunition for use against someone about to trigger a suicide bomb.

It is believed the decision was influenced by the tactics used by air marshals on passenger jets - where such bullets are designed to splinter in the body and not burst the fuselage. They have been assessed as posing less risk to people around the suicide bomber than conventional bullets but the effect on victims is devastating.

Like the overall Kratos policy, the decision to make dum dum-style bullets available was taken in secret. However, it is understood that the Home Office became aware three years ago that police were considering their use.

Negotiations on possible national guidance are understood to have been inconclusive and the choice of ammunition appears to be at the discretion of police chiefs, not the Home Secretary.

There is no legal prohibition on police use of such ammunition. The Home Office confirmed last night that "chief officers may use whatever ammunition they consider appropriate to meet their operational needs".
It is understood from security sources that hollow point bullets are still available as an option to police firearms teams in Kratos-type cases.

The Independent Police Complaints Commission is investigating the shooting during which seven bullets were fired into Mr de Menezes's head and one into his shoulder.
A number of officers, including members of the firearms and surveillance teams and the Scotland Yard commander who ran the operation, Cressida Dick, have been issued with notices that they are subject to inquiries by the IPCC.

Hollow-point bullets: used at the discretion of police chiefs


The UK is a corrupt military police state.