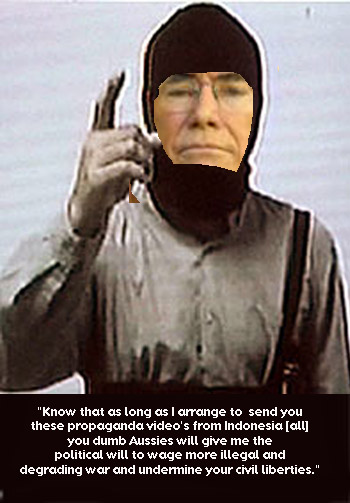 AUSTRALIA/INDONESIA: CHILLING new propaganda tape send by john hoWARd the coward's mates from Indonesia should give him the political power to pass new 'Anti-Terror legislation' here.

Sending even more 'troops to Iraq' and or keeping those that are there longer, should also seem more feasible, in the current climate of 'fear' and 'terror' created by the authorities, both here and abroad, especially by our close neighbours Indonesia.

So regardless of all the problems the new Anti-Terrorist bill has created for civil libertarians and the skeptics alike here in Australia and regardless of all the dissent over waging illegal and degrading wars - that have led to more State sanctioned terror - you will live in fear of our national insecurity - because john hoWARd said so!

The tape was sent via the Indonesian authorities and Australian media giants who have 'no affiliation' with john hoWARd the coward?

You know the Indonesian authorities that 'set-up' the raid that had allegedly caught the Bali bombers that everyone has been looking for since at least 2002.

Yeah, the same authorities that reported that he'd been blown up then changed their mind the very next morning and said they shot him instead.

And now those same authorities claim to have caught the other three that allegedly helped assist last month's Bali suicide bombings that killed four Australians.

You don't have to worry about the suicide bombers though because they blew themselves up and there are no witnesses and now swiftly taken care of by the capture of only those who allegedly 'assisted' in the bombings.

All this nonsense to hide the fact that the Bali bombing was not State Sanctioned Terror when it clearly was in relation to the explosive used in the second Bali bomb blast in 2002, which was clearly military hardware.

But don't you worry they learned from their first experience with Australian skeptics and made sure all the bombs that went off recently were home made (to look like they were home grown).

They also learned how to ensure someone else took the blame and how to provide material allegedly found on the day of the set-up (books and things), (videos and the like), to have you 'believe' their story.

Don't forget the guilt of the accused that were paraded and dragged in chains before the rednecks with bags on their heads like you'd see in Guantanamo after they've been tortured into making submissions!

This was planned very well and the propaganda is duel purpose.

This type of propaganda can also promote the fear so very necessary to pass draconian legislation here in Australia. With the community constantly living in more fear anything is possible, right, you little coward wimp?

The American Military Industrial complex would be proud of you johnny and now you can do the job they want you to do and take away more of the community's human rights and civil rights. You can also continue to wage more illegal and degrading war unabated as well as send more troops to Iraq and or keep them there longer.

The Australian community believes the recording to be the work of senior operatives in the Indonesian government (Military and Police) as well as UK, USA, and Australian special forces that make up the (Coalition of the Killing), which includes the CIA and ASIO.

This initiative is definitely all part and parcel of waging illegal and degrading wars on sovereign nations and bolstering the support needed to validate it and to also get away with it as some sort of a mercy dash to save the world!

george w bushit, a senior operative of the USA, tony the bliar from the UK and john hoWARd the coward from Australia are all masterminds of the Coalition of the Killing.

Recording threats is common practice for warmongers like them anywhere in the world but this is thought to be the first time it has been done in Indonesia. It is also the most specific threat made against Australia and the first to name specific politicians.

But it is not the first time that the bombs went off in Indonesia to promote fear and the political power for hoWARd the coward and his cronies to wage illegal and degrading wars in 'their' war on terror (which is terror).

Speaking in South Korea, hoWARd the coward played down the Iraq war link and fears for his own safety on the job because he amongst others knows all about promotion and war propaganda and has the resources to achieve this.

He said he wasn't the least bit surprised that the video linked Australian involvement in Afghanistan and Iraq to us being a terrorist target. Because he knows all about it and the new draconian Anti-Terror Bill will protect us from all that nonsense. Right you coward!

Notice that the loser of the century is doing this from South Korea and not in his own pile of shit!

Asked if Australia would be less of a target when our forces eventually pull out of Iraq, hoWARd warned that the threat would not change markedly for years.

Yeah! Especially if Donald Rumsfeld the terrorist and torturer is asking for more troops to wage more illegal and degrading war!

Now these men have been chosen as scapegoats for the State sanctioned terror and will be prosecuted under an anti-terror law that carries the death penalty for allegedly assisting the perpetrators of a bombing.

Allegedly the government responsible for the two Bali bombings and an attack on the Australian embassy in Jakarta cannot now be blamed because the Indonesian authorities claim to have blown up a man they blamed it on.