Report from Damascus, Syria with 9 photos

This is a 1,400 dispatch from Damascus, Syria.
It, sadly, may be on Bush and Blair's hit list. 9 photos are attached. 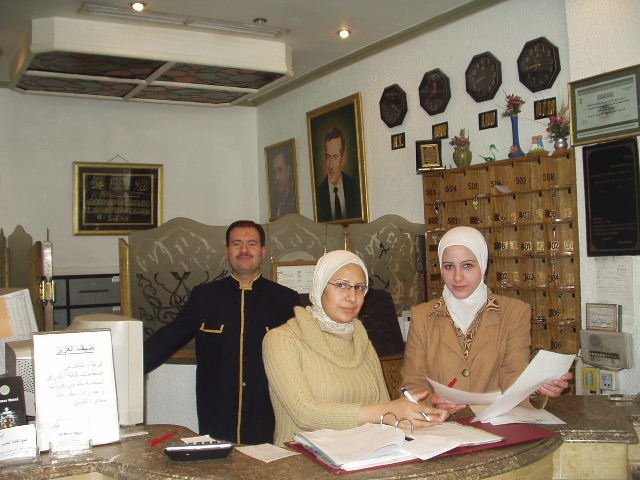 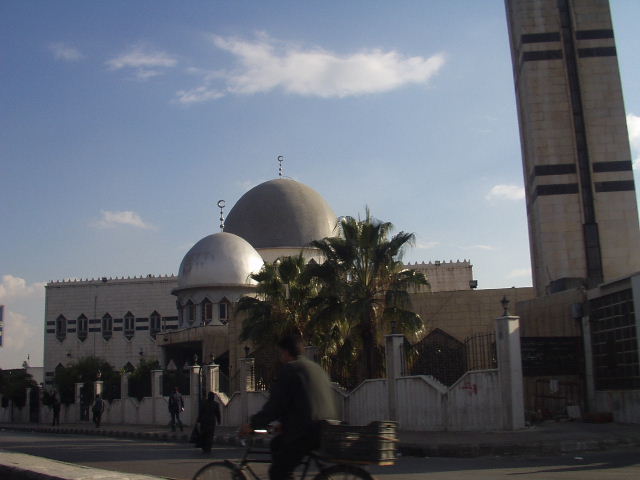 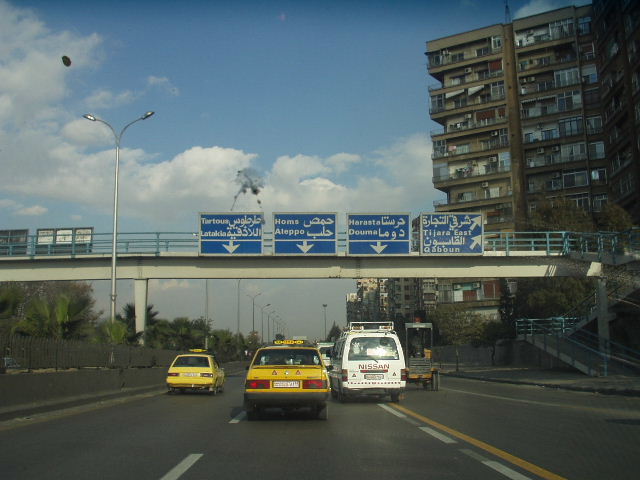 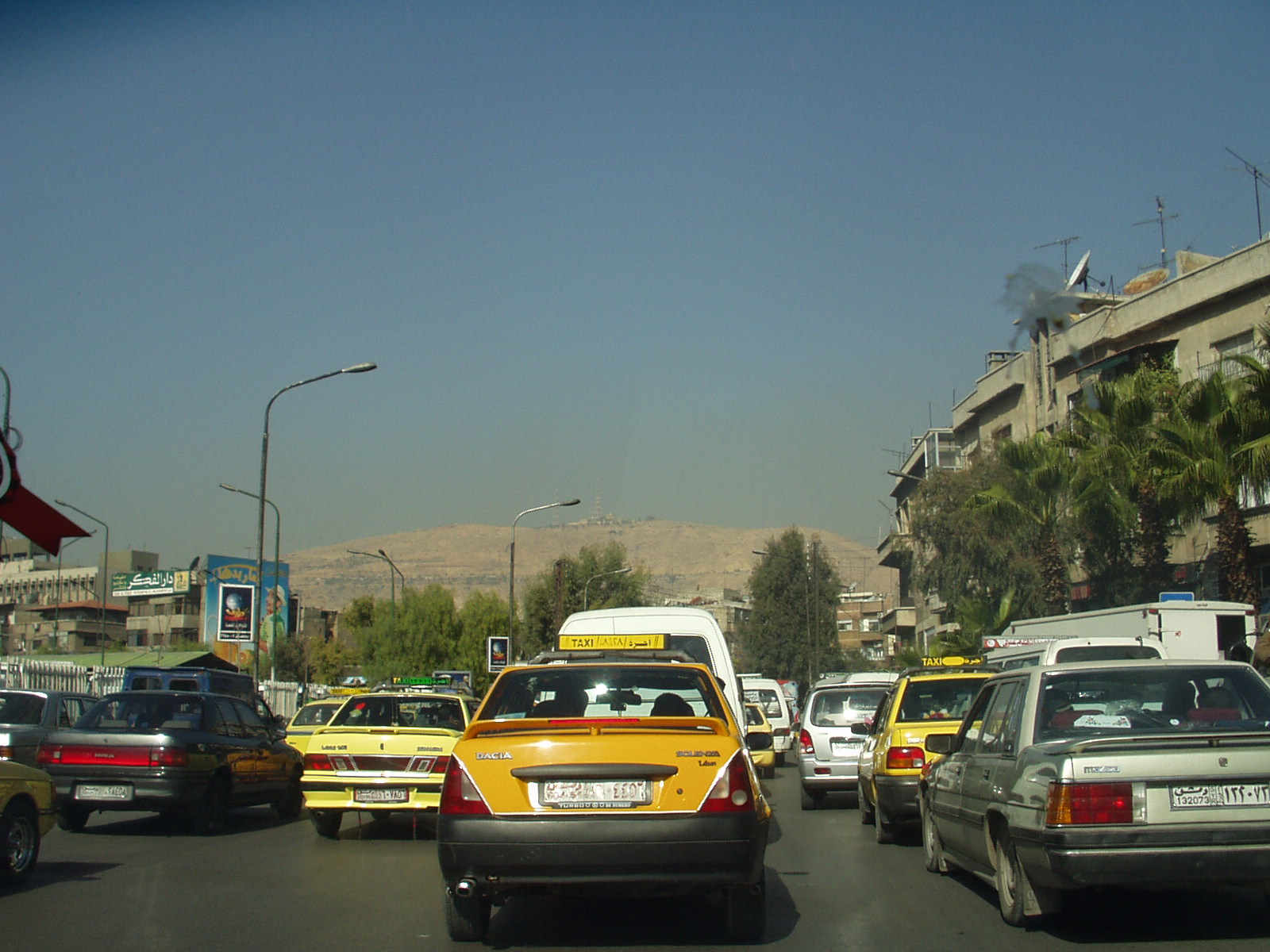 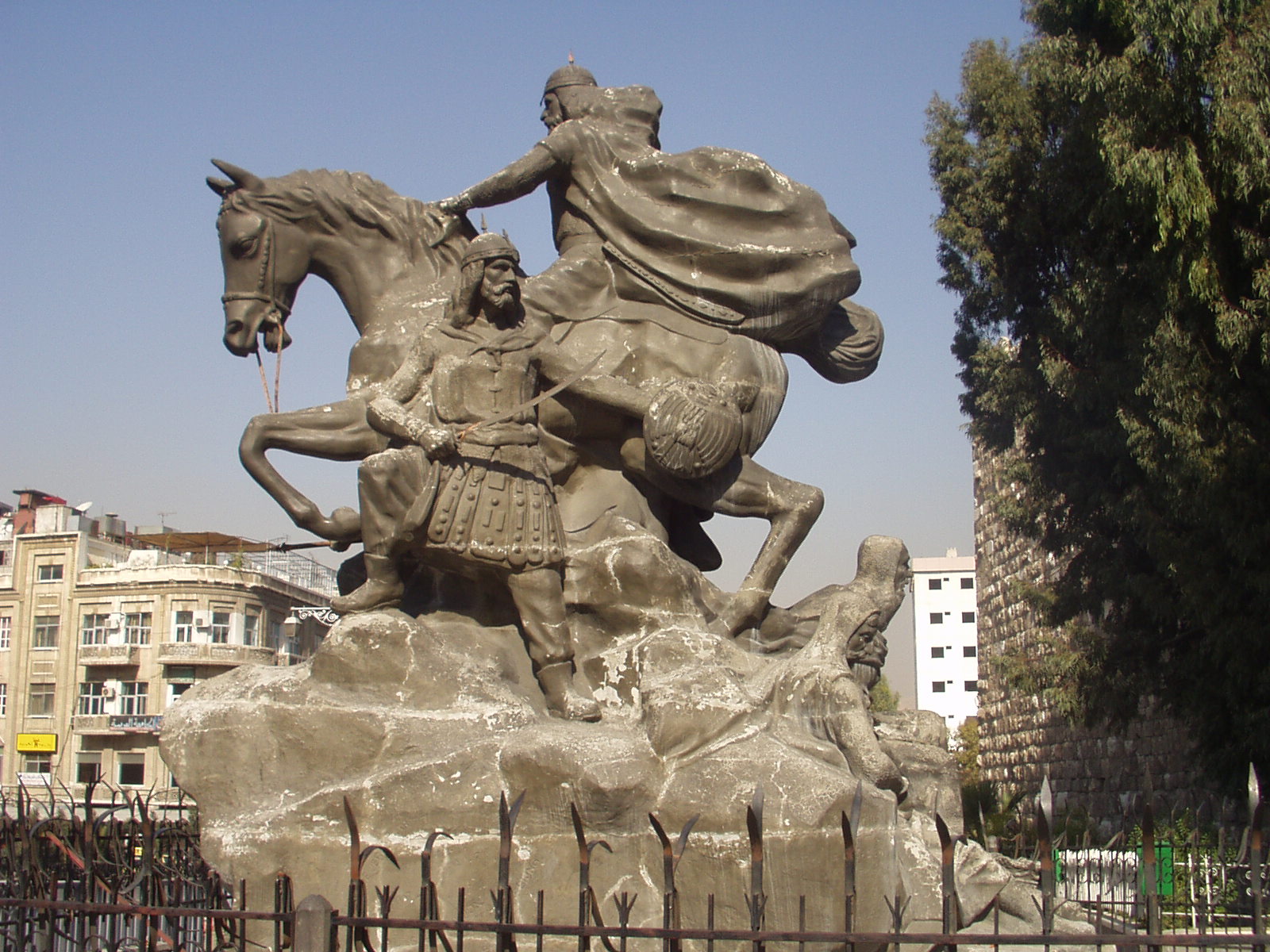 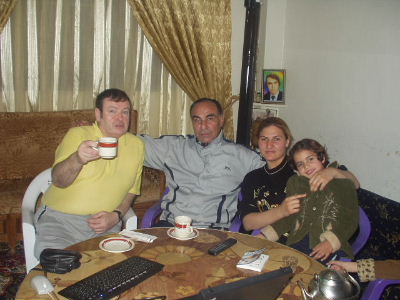 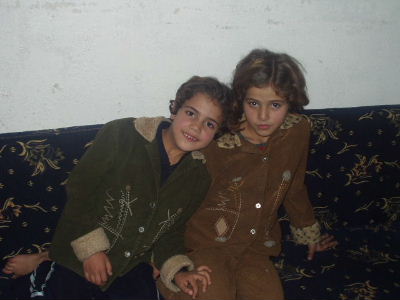 I took to the road to Damascus last week in just the metaphorical sense as I flew into the Syrian Capital from Amsterdam last Friday, November 11th. Unlike Egypt and Jordan you cannot normally obtain a visa at the border but must have one stamped in your passport beforehand. I had been refused a visa on two previous occasions – once in Amman and once in Istanbul. It was third time lucky however as I struck up a friendship with the staff at the Syrian Embassy in London and that worked the oracle.

I passed through the customs and immigration with little more bureaucracy than entering Britain and was pleased to find my driver Ziad waiting for me. It was one thirty in the morning and I was tired and in need of a hotel. The 3 star hotel in Baramkeh was very good value being only half the price of an equivalent hotel in Holland.

Syria, a country of some 18 million people, has been suggested as being `next` on George Bush’s `war on terror`. The real reason for wanting to attack Syria clearly has nothing to do with WMD but is likely concerned with Syria’s strategic position in the region. Regime change could lead to increased Israeli hegemony and there is the little matter of Syria’s oil and gas reserves in the north of the country. While not as large as Iraq’s or Iran’s resources they are a temptation as is the possibility of building a pipeline across the country to the Mediterranean.

Like its eastern neighbour Iraq Syria is a cradle of civilisation with Damascus being considered the oldest city in the World. The alphabet found carved on a mud tablet in Ugarit is the first alphabet known to history. For thousands of years the area between the Euphrates and the Mediterranean was a theatre for historical change. Throughout Syria there are witnesses to the various ages of history from the ancient Roman amphitheatre of Bosra in the South to the Aramaic district and citadel of Aleppo with its venerable traditions in the North. On the 172km Syrian coast is the important seaport and resort of Latakia where there is a ferry connection to Limassol in Cyprus.

As a first time visitor I was struck by the friendliness and hospitality of the Syrian people who have been demonised as terrorist supporters in the Western tabloid press. I have received numerous invitations to dinner; to stay at people’s homes and to join in friendly conversation, what amazes many of the local people is how `democracy` seems to work in the West. They asked how countries like Spain and Italy could send troops to Iraq when 80- 90% of their populations were against the war. They were puzzled by the fact that Tony Blair only got 22% of the electorate in this year’s British election yet managed to win the election despite most British people thinking him a liar. They are concerned than they may be attacked by the US, with Britain in tow. I tried to reassure them by saying that most American people are now against the occupation of Iraq and don’t trust Bush and with the same situation in Britain it is going to be difficult to launch a war against any country at present. The people, good people of Syria may yet be spared the horrible fate of their next door neighbours in Iraq.


Syria has been branded a pariah state by Washington both because of its suspected involvement in the assassination of former Lebanese Prime Minister Rafik Hariri and because the Bush administration regularly charges it with allowing foreign jihadists into Iraq. Ex Lebanese Prime Minister Rafik Hariri who long campaigned for a withdrawal of Syrian forces from Lebanon was assassinated by a car bomb on February 14th 2005. The US and UK governments immediately suggested that Syria was responsible and persuaded the UN Security Council to initiate an investigation of the explosion. The so called `Mehlis` report with its inconsistencies may well be as much of a dodgy dossier as the infamous one about Iraq’s non existent weapons of mass destruction. See this analysis of the Mehlis report:


After the resolution of October 31st was announced US Secretary of State Condoleezza Rice declared: "With our decision today, we show that Syria has isolated itself from the International community – through its false statements, its support for terrorism, and its interference in the affairs of its neighbours (!) and its destabilising behaviour in the Middle East." Then she warned: "Now the Syrian government must make a strategic decision to fundamentally change its behaviour."

I have spoken to many Syrians who say very categorically that they will resist fiercely any attack on their country. They say things like “Look, we are behind our President (Bashar Al Assad) 100%.”

There are those who will of course argue that that Syria is not a democracy like Britain and that there are human rights abuses and censorship. While this may be partly true perhaps people in glass houses shouldn’t throw stones. The majority of British people did not elect Tony Blair; in fact no British government since 1935 has held a majority of the popular vote. 1935 is a long time ago – the days of “God Save the King from Baldwin” and all that. The majority of British people did not want the war on Iraq yet it happened despite their wishes, the majority of British people want the British troops brought home, Tony Blair refuses to listen. Is this democratic? Are the draconian new anti-terror laws proposed by Home Secretary Charles Clarke compatible with democracy and human rights? What about Guantanamo Bay and Abu Ghraib? Perhaps we should put our own house in order before we criticise others.

The Syrian Times is a government run paper but there is easy access to the Internet in Damascus with dozens of Internet cafes including 7 in my hotel block alone. Anyone can easily access the BBC and CNN websites as well as Al Jazeera and other Arab websites. European Channel 5 and US channel CNN are both available as are Lebanese and Kuwaiti Television stations.

The Syrian people must rank as among the most hospitable in the world. Only yesterday a taxi driver called Eiad who I had not previously met invited me back to his home in Katana, some 30km east of Damascus. Though Syrian born he is of Palestinian descent and I was the guest of honour at a lovely meal of chicken, rice, traditional home baked bread and bowls of exotic fruit. The two enchanting young girls of the family, Bushrah and Rasha aged both 9 and 6 respectively were a delight and could speak surprisingly good English. Despite their limited income the family home is immaculately clean with some lovely carpets and fittings. I left my digital camera behind when I went back to my hotel but to my amazement they drove all of 30km (and back) to my hotel to return my camera. Such honesty is actually taken for granted in Syria. I invited them into the hotel for a coffee and we had another enjoyable conversation.

The whole Western myth of the Arab people as being somehow dirty and dishonest is just that - a filthy, racist myth. Whatever one may think of the government of the country there is electricity, clean water and security. The streets of Damascus are safe to walk at any time of the day or night. People have time to talk to each other and their society is not driven by the insane greed which is so prevalent in Western cultures – especially the United States.

With the Bush administration in crisis and most Americans believing him a liar attacks on Syria and/or Iran may be less likely. On the other hand Bush is almost certain to remain in power for the next three years despite the valiant efforts of special prosecutor Mr Patrick Fitzgerald. Lewis `Scooter` Libby has been charged with 5 counts of perjury and could get up to 30 years while his boss Vice-President Dick Cheney may be forced into retirement or resignation next year. Could a badly wounded administration be even more of a threat than before? Will the crazies go totally crazy and decide to go down with guns (and nukes) blazing? And launch World War 3? We must hope and pray not.

Here is a BBC country profile of Syria: