We walked about in Birmingham in NBC suits - we're going to do it again. 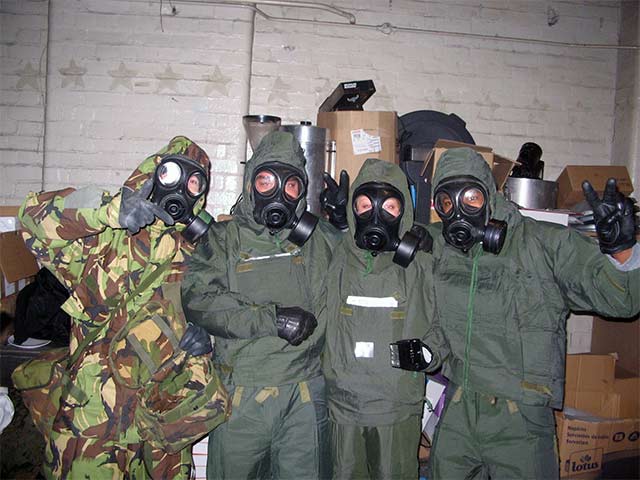 This coming Saturday (27th November) will see the Drop Beats Not Bombs NBC and respirator-wearing crew hitting the streets of Birmingham City Centre. We are aiming to direct as much attention as possible on the fact that there’s other things to be doing rather than blowing each other up. We will be walking around Birmingham City Centre from about 1 pm so please please please come and give us some support.

We already tested the water last Saturday with a group of 4 of us calmly strolling through the City Centre in full NBC (just in case anybody is unaware that stands for Nuclear, Biological and Chemical warfare) suits with full face respirators, handing out Drop Beats Not Bombs flyers to anyone who would take them.

There had originally supposed to be 10 of us but everybody else seemed to lose their courage the closer the time came. Eventually we were left with just 4, but we still tried it out. I have to say, the walk up to the city centre from the Custard Factory in Digbeth was a bit unnerving as none of us knew just what kind of reaction we would generate. We had debated at length whether we could possibly be arrested for anything but decided that it wasn’t illegal to wear NBC suits.

As we entered the city centre proper, the looks and expressions that we began to get were absolutely priceless. I must admit that at first I was concerned that our sinister apparel might just be enough to frighten small children. How wrong could I have been. It was the children that totally vibed off the suits, smiling, laughing and waving to us.

It was the adults who were shitting themselves!!!! Seriously, fully grown adults were jumping out of their skins with the shock of it all.

So we strolled along the Bullring walkway - the path that runs between the two sections of the Bullring - trying to move along as slowly as possible. It was at this very place last April that we had been escorted off the Bullring land because I was wearing a Tony Blair mask and the others were waving Drop Beats Not Bombs placards! So we felt sure something awry would happen…but no, we were left unmolested.

This freedom of movement in full NBC suits was somewhat surprising but very much welcome. We continued our stroll all along New Street, right the way up to Victoria Square where the annual Xmas German Market is being held. I don’t think those poor German stallholders have ever quite seen anything like it. We mingled with the jolly revellers who were sipping their mulled wines and rum hot chocolates and they all seemed quite pleased to take our flyers from us. I wonder what festive thoughts passed through their minds as they glanced down at the suicide bombing related imagery now tightly grasped in their chilly hands??????

Well, we got this far without any fuss so we thought why not continue……so we did. We went all the way up to Paradise Forum…..and it was here that we were suddenly stopped by a towering, Day-Glo yellow-clad police officer sat astride his top-class police mountain bike.

Well, to be honest, he didn’t actually do the ‘Ello, ‘ello, ‘ello thing but he did stop us and ask us what we were up to. We told him we were just having a walk handing out leaflets. To our grateful surprise his response was simply to say “Oh, Ok. Have a nice day then.”. And off he cycled.

So now that we’ve told all the lightweights about that, they’re all quite up for doing it again this weekend. So what we’re going to do this time is increase the level of surrealism. We are going to spray Drop Beats Not Bombs in Christmas Snow Spray all over the place, sprinkle glitter around the floor, and attach tinsel to random pieces of street furniture. If the locals thought we were strange last Saturday Gordon knows what they’ll think this week.

Anybody fancy joining in with us, I’m afraid you’ll have to bring your own NBC suit and respirator as we’re all out of them!! Army surplus is always an option…….But if you happen to be around the city and you see us about please come and say hi and let us know you’re there.

Not sure where we’ll be starting off but you’ll definitely see us in the city centre for a good 3 or 4 hours.