The event is aimed at non-vegan members of the general public - all vegans and campaigners are urged to get involved with helping to make this event a great success.

chrissy@vegancampaigns.org.uk to see how you can help. 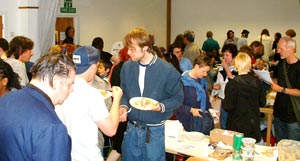 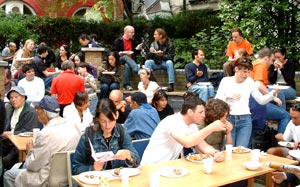 The free vegan food fayre on 10 December will include a delicious vegan buffet. All food is absolutely free and all are welcome. The buffet features chocs, mince pies, xmas pudding, trifle, pizza, quiche, burgers, salad and lots more. There is a charge for drinks. The event has been sponsored by Alpro, Booja Booja, Frys, Isle of Bute Foods, Lyme Regis, Plamil, Pogo Cafe, Redwoods and Yaoh.
The free food fayre is a perfect chance to find out more about veganism. We aim to show that you can have a delicious and healthy diet without harming animals. As well as all the food samples, there will be plenty of information on going and staying vegan. There will also be info on how to include more vegan food in your diet.
This fayre is the fourth organised by people involved with Vegan Campaigns. The first two, in November 2003 and June 2004, were in a central London location right in the heart of Soho, and were very successful. In fact they were so successful that we had too many people turning up and so had to look for an alternative venue.
The most recent food fayre was on 15 February 2005 at Pogo Café. Once again it was a big success, with over 300 people attending the event throughout the day.
The free food fayre idea originated from Realfood who have organised several similar events. These proved to be very successful in promoting veganism and setting up local groups. The Realfood website (

http://www.realfood.org.uk/) includes a plan on how to organise a vegan fayre.

Why Vegan?
(taken from the ‘Why Vegan’ booklet published by the Vegan Society

http://www.vegansociety.com/)
Veganism helps animals, people and the environment:
1. Help stop animal suffering - farm animals are kept in the most appalling conditions, exploited to the limits of their endurance and slaughtered at a fraction of their natural lifespan.
2. Be more healthy - A well balanced wholefood vegan diet can improve your quality of life and decrease your chances of succumbing to many of the ‘diseases of civilisation’ – including heart disease, stroke, diabetes and some cancers.
3. Help save the environment - Meat-intensive diets contribute to worldwide environmental degradation – to global warming, deforestation, desertification, water pollution and the malnourishment of millions of people.