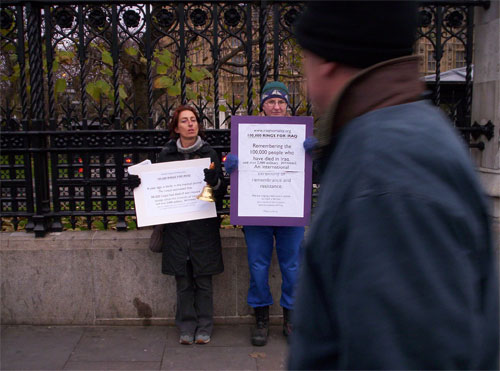 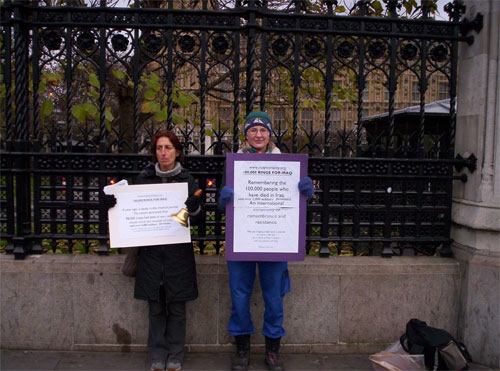 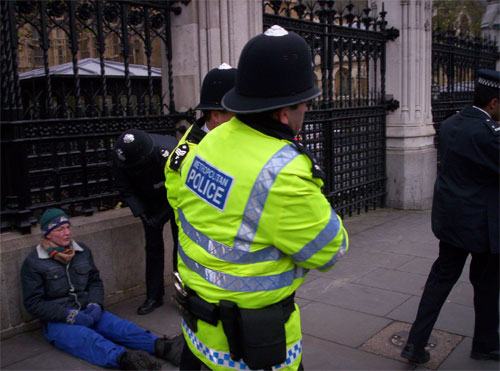 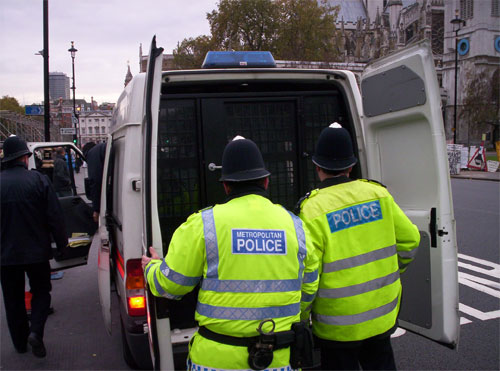 Two women were arrested on Friday 25th November while holding a bell-ringing ceremony outside Parliament to remember the estimated 100,000 people who had died since the beginning of the war in Iraq.

The women were arrested for being 'participants in an unauthorised demonstration'. The police were very reluctant to arrest and briefly authorised the protest but then banned it again when the women refused to give their details on the grounds that if the demonstration was now 'authorised' they should not be obliged to give their names.

The police also helpfully suggested that the two women join Brian Haw on the opposite pavement as he is the only person exempt from the laws ironically introduced to prevent his permanent anti-war display. However, as Brian's side of the pavement is now practically devoid of passers-by, this option was also turned down.

The women were taken to Charing Cross police station but later released without charges. As well as being reluctant to arrest, the Police also seemed concerned at the possibility of two more people challenging the new laws.

19 people are currently facing charges under the Serious Organised Crime and Police Act (2005) which outlaws protests without police permission within 1km of Parliament. Let's hope that more will challenge this absurd and immoral law.

1. The ceremony was a response to a call from Voices for Creative Nonviolence (US) and Justice Not Vengeance (UK). See www.iraqmortality.org The organisers are hoping for one hundred communities to each ring a bell 100 or 1000 times amounting to 100,000 rings.
2. In April 2004, 52 former senior British Diplomats wrote that "it is a disgrace that the coalition forces themselves appear to have no estimate of the Iraqi deaths due to the invasion and occupation. In contrast, lives lost by US and coalition soldiers are carefully recorded and mourned"
3. On 25th October Milan Rai and Maya Evans of Justice Not Vengeance were arrested for holding a similar ceremony outside Downing Street. The two womens' action that took place outside Parliament on 25th November was undertaken in solidarity with Milan, Maya and all the other protesters arrested under the new legislation preventing demonstrations within 1 km of Parliament.