Critcal Mass is a regular event. The meeting point in Nottingham is the Savoy cinema on Derby Road in Lenton, on the last Friday of every month now at 5.30pm. It is becoming a more popular event with many more riders turning out each time ..... This time, we headed off into the city centre, via 'The Park' [to annoy the rich folks living there :-) ] and Castle Boulevard. We had a sound system trailer on tow, with some chunes to peddle to. 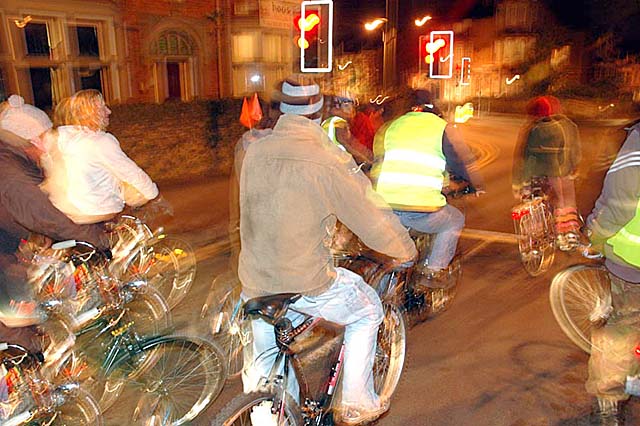 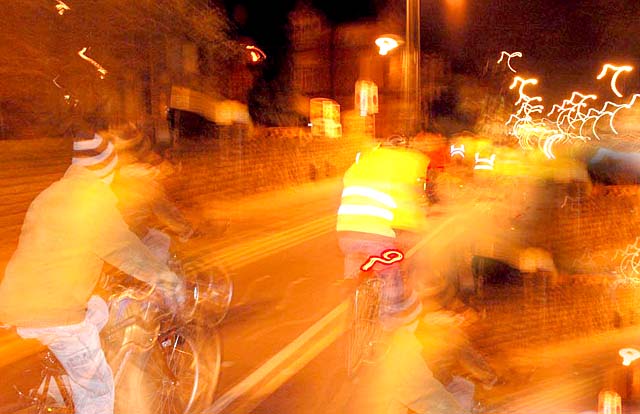 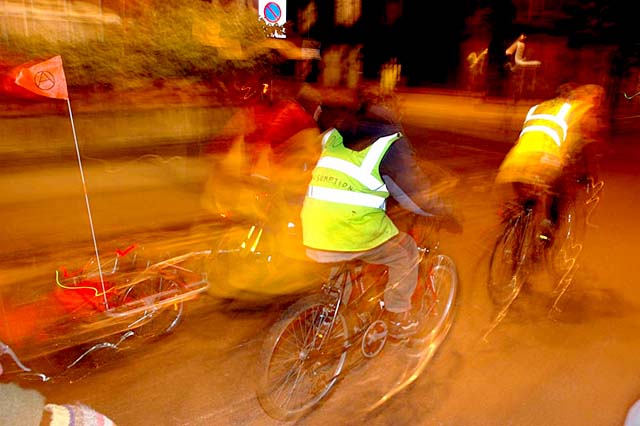 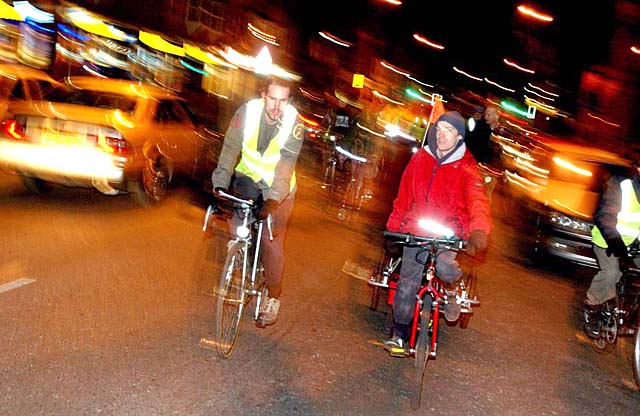 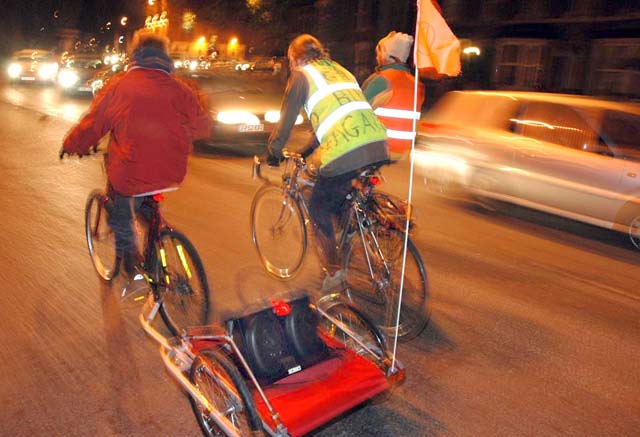 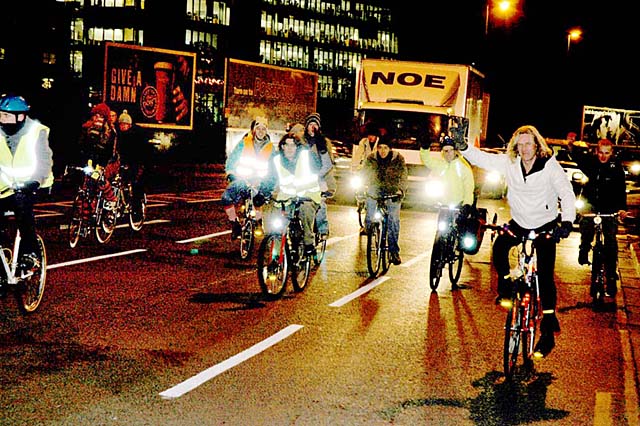 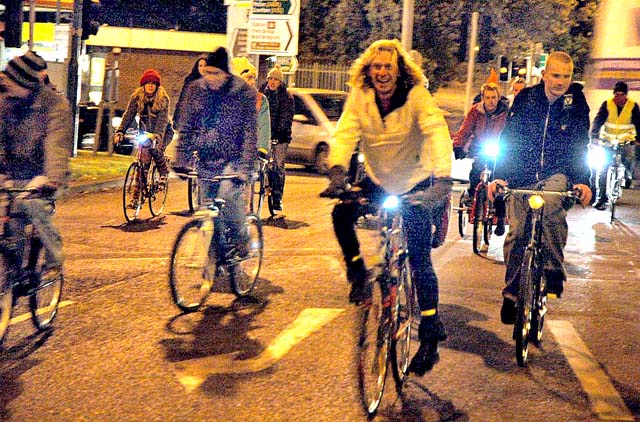 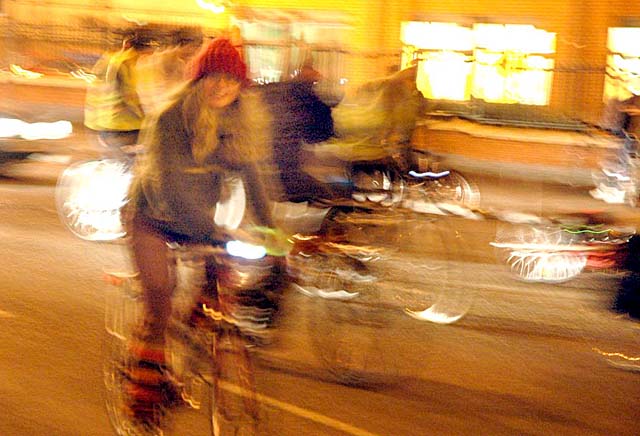 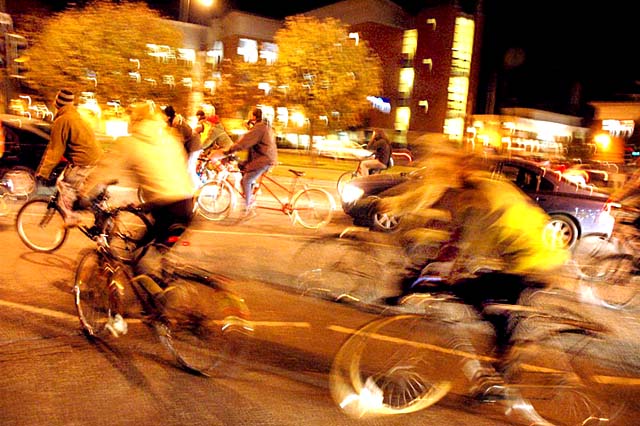 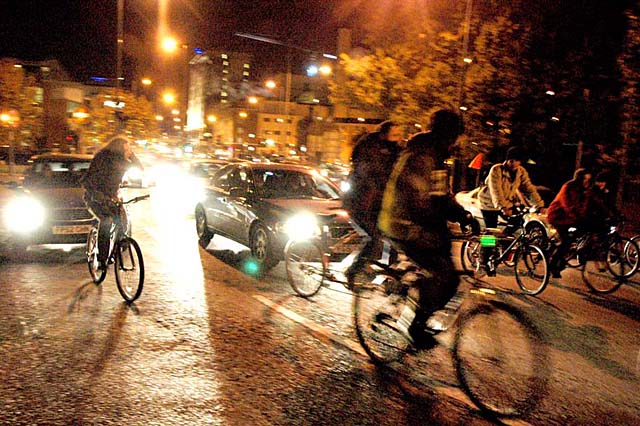 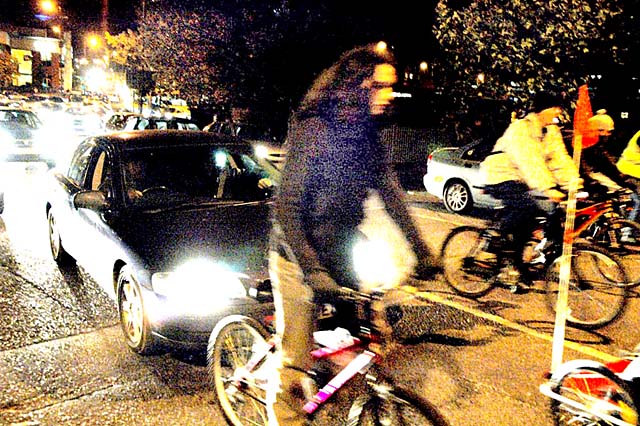 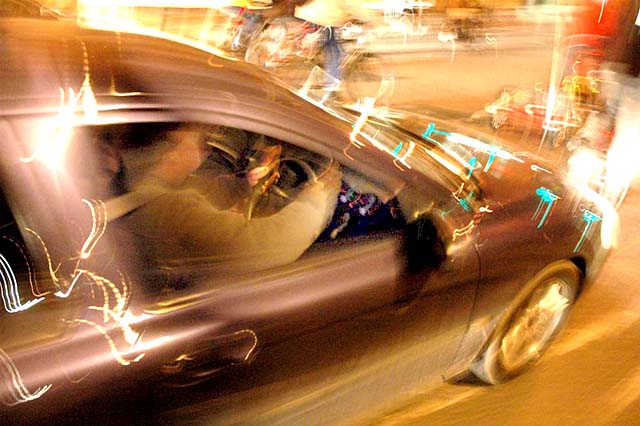 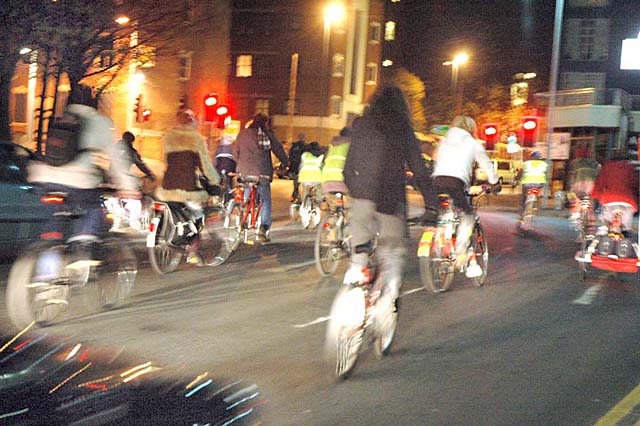 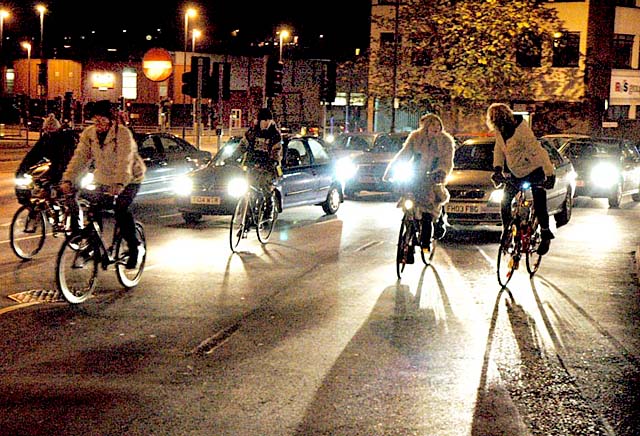 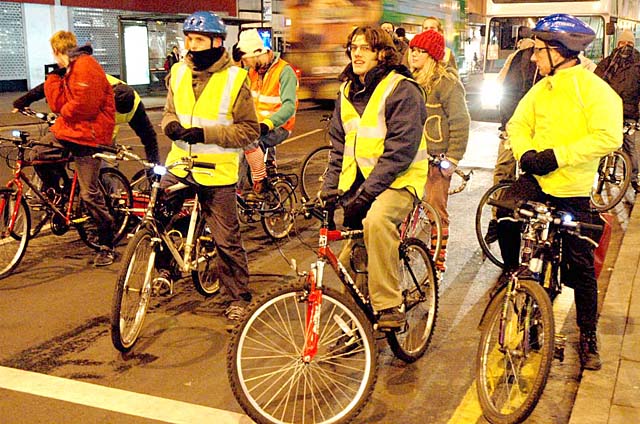 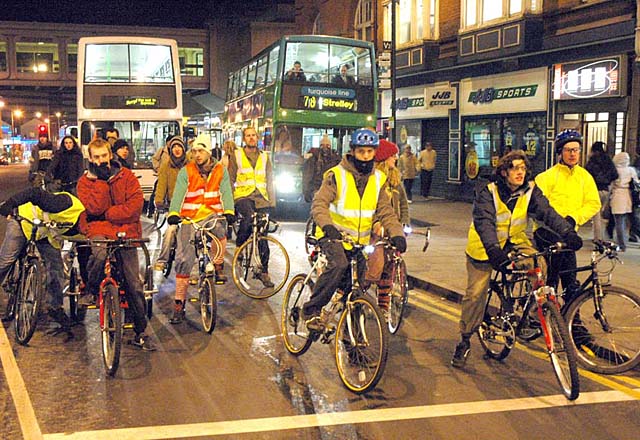 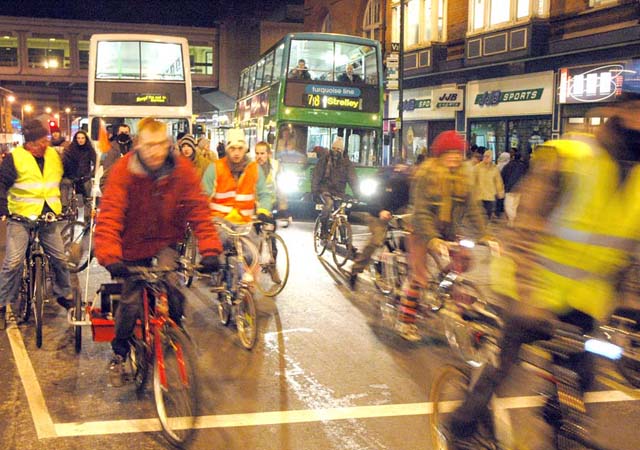 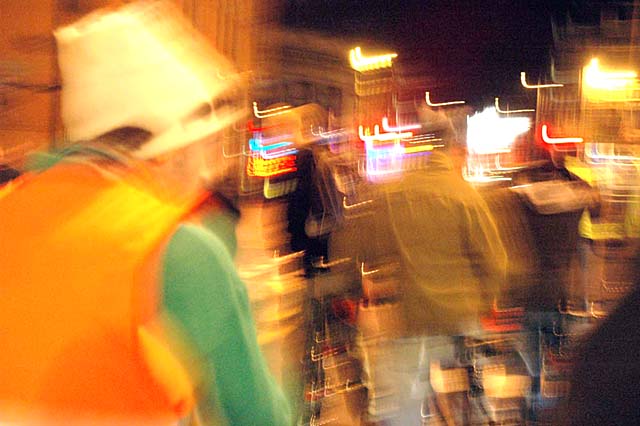 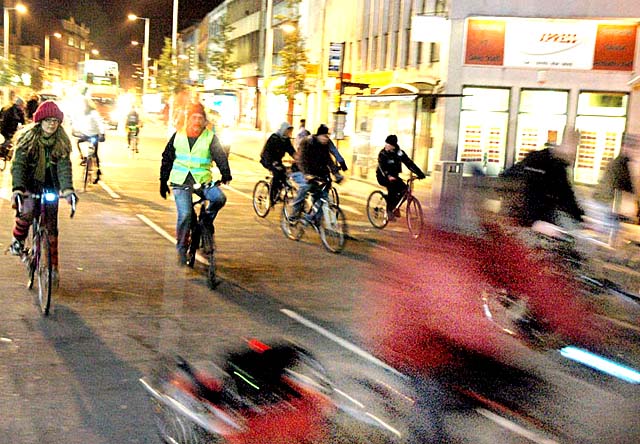 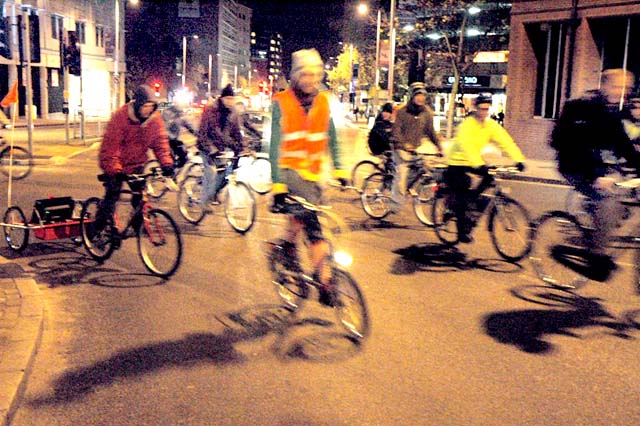 
Critcal Mass is a regular event. The meeting point in Nottingham is the Savoy cinema on Derby Road in Lenton, on the last Friday of every month now at 5.30pm.

It is becoming a more popular event with many more riders turning out each time .....

This time, we headed off into the city centre, via 'The Park' [to annoy the rich folks living there :-) ] and Castle Boulevard. We had a sound system trailer on tow, with some chunes to peddle to. Some motorist were a little annoyed with us, bumpers touching back wheels a couple of times, a couple of cars trying to roar through our band, overtaking with wheel spins etc. and a few rude remarks and gestures. So, not much new there then.

Anyway, we took a random route around and about in the city, taking in such features as the Castle, MacDonalds, and a peddle through the inside of the Broadmarsh Shopping Centre :-))))

So, if you want to draw attention to transport policy, issues around climate change, health and fitness, pollution and the fact that cars keep injuring cyclists ...... Then please join in.

As a photographer, I've covered this and many similar direct-action events in a 'documentary style'. This time, I thought I would come over all 'arty' and this time present the event in an 'impressionistic style'. Street light colour, long shutter speeds [1/4 - 3/4 sec], giving a feeling of energy, vibrancy, colour and action. An event that is fun to be at, in fact.


and a Nottingham Indy feature about the whole shebang at:

Bicycle repair and support, at the ASBO Centre, check out:


Please Note: "We are not blocking the traffic - We are Traffic!"

[ps. think I've mentioned this before, but some bastard has stolen my bike!]

I was at the most of the last CMs & have had to interven when we were attacked. We cant all be there all the time, but generally it seems that most danger happens when we dont stick together as a group & as one mass, plus it was alot safer with the chillout sounds & bike trailer at the back rather than charging ahead into danger.
People are working away on more bike trailers,etc at the ASBO,you can try contacting James there if you want to help, as he seems to be co-ordinating it, but not date has been set yet. Though the aim is to have at least one more trailer at the back with lights for the next mass,
amen,

Another point on safety — get some lights!

Based on those photos, many of the riders did not have lights on their bikes, despite cycling through heavy traffic on a dark winter evening.

It might not look so cool, but they do serve a purpose!

As the next 'last friday in the month' is Friday 30th December, and many folk will be away (students etc ...) will there be enough to have a safe and meaningfull prescence?

Perhaps some of us should go to the meeting point just in case others turn up but, if necessary, make the ride a short one to the nearest pub!!

http://www.veggies.org.uk/arc/event.php?ref=213
(You can click the 'email the editor' link at the bottom of that page)