BeyondTV 2005, an international film festival organised by Undercurrents, took place in Swansea at the Dylan Thomas Centre over the weekend Friday-Sunday 25-27 November 2005. 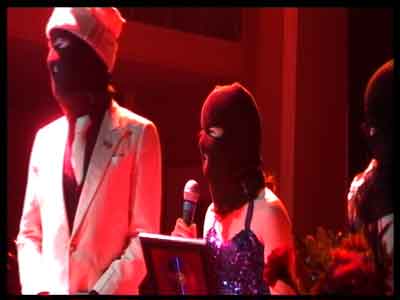 Secret Society of Active Art in Wales receiving their Misty

'The MISTYs aim to celebrate how media can be used for much more than just entertainment. Images from a camcorder or a digital camera can educate and inspire us to looking differently at our world. It was tremendous having so many people travel from all over the world to take part in the first MISTY awards. Its great to see Women film makers being honoured and especially pregnant ones.' – Helen Iles, Undercurrents

There were boats off shore, we were overlooking the marina, but it was not quite Cannes. Welcome to the BeyondTV International Film Festival 2005, organised by Undercurrents.

Last year the Film Festival took place in the Patti Pavilion, this year the Dylan Thomas Centre. A lovely old building, once the Guildhall, overlooking the Swansea Marina.

The format was different too. This year a cabaret and award ceremony, The Misty Awards, on the Friday night, for Saturday two simultaneous screenings of films all day Saturday.

I have mixed feelings about the changes. There were good points and bad points.

For me, the award ceremony was a waste of time. All we got was little snippets of films, if you had never seen them before, it was difficult to understand what they were about. Some of the categories, and the entries, seemed very much to be scraping the bottom of the barrel.

Last year the point was made, this is not about awards, it is about raising awareness, showing what people have been doing, encouraging others. The last thing we want is people making these films, just to get an award.

But, those who got an award, said it inspired them.

Too many awards to list them all, but those who deserved them and some who were intriguing or worth mentioning:

Seize the Day, like the true troubadours that they are, worked for their dinner, and gave us a quick song.

Some of the work on show was quite ingenious. Make your own video by appearing before all the CCTV cameras, then asking for the footage. When occupants of a flat found they were under CCTV surveillance, they dressed as an 8 foot alien and walked out of the flat.

One of the most amusing, but at the same time raising serious questions on police accountability, was the arrest of an urban arts project, Secret Society of Active Art in Wales, for screwing satirical brass plaques onto park benches. Arrested and charged, not only with criminal damage, but also possessing a dangerous weapon, namely a screwdriver. A well deserved award.

A report on this action will go out on the Pod Report.

I was never quite sure, was the awards to ape mainstream awards, or were they simply taking the piss.

Undercurrents gave themselves an award for all the hard work they have done!

Following the awards was Have I got SchNEWS for You. For those who stayed to watch, they enjoyed it.

The main difference to last year, was that last year we were able to watch films in the evening, then we had a party with Seize the Day playing. The food was better too!

On Saturday there were workshops in the morning, followed by two afternoon screenings and one in the evening.

The screenings were split into two simultaneous sessions of brief 3-15 minute films and full length films.

It was good to have a couple of long films, but I felt there was too many. I found it is a lot easier to sit through lots of little short films, rather than a few long films. The long ones I would rather have sat and watched at home on my laptop.

Saturday, I walked along the sea front to the venue, with the net result I missed lunch and most if not all of the first afternoon session of films.

The problems with simultaneous films, at times I wanted to be in two places at once.

A film I wanted to watch but missed, and I was told it was excellent, was Flip Flotsam (Etienne Oliff).

Reach for the Sky (Undercurrents), shown last year, was by popular demand shown again. It looks at uncontrolled airport expansion and how people are fighting back. Undercurrents have now produced a booklet to accompany the film.

The good folk of Swansea manged to defeat their airport, not so in Farnborough, where the Rotten Borough of Rushmoor rammed through a business airport against the wishes of local people.

A report on Farnborough Airport will be going out on the Pod Report.

A film I regret I only saw a snippet of and wish I had seen in its entirety was The Only Clown in the Village (Undercurrents).

It would be difficult to meet a nicer guy than Kingsley the Clown. Kingsley the Clown is the only Welsh-Asian clown in the business. He gave me a lift home both nights and even offered to collect me the next day. When Kingsley the Clown learnt of the Tsunami last year, he wanted to go out to Sri Lanka and do all he could to help. Lacking the language skills needed, he found the best way to communicate was to do what he is best at, clowning about and showing his big heart. Skills that transcend any language barriers.

Kingsley the Clown is now back in the UK and continuing to help the people of Sri Lanka. He now needs your help.

Those who were at the Patti Pavilion last year, may remember Kingsley doing the juices.

In the second screening of the afternoon, Hamish presented a global section. Those who were at BeyondTV last year, may remember the very moving film by Heidi Douglas on rainforest destruction in Tasmania. Hamish brought us up to speed on what had happened and I spoke to Heidi in the early hours of the morning.

Following the screening last year, the company carrying out the destruction launched a multi-million dollar law suit against the objectors for blackening their good name (sic). Heidi, as the filmmaker, was one of the named individuals. There have been two court appearances to date, with a third to follow. I believe Heidi has produced a follow-up film looking at the court case.

In Whose Interest? (David Kaplowitz), a post-911 look at US foreign policy over the the last 50 years, would be familiar territory to anyone familiar with the work of William Blum, Noam Chomsky or John Pilger. At 27 minutes, it was not too long to watch. Familiar or not, it was chilling to watch. For home viewing, or maybe a public showing with discussion, I'd like a longer film. But for anyone unfamiliar with US atrocities around the world, an excellent introduction and overview.

The future world will be a battle for who controls the world's dwindling energy reserves. In Whose Interests? and End of Suburbia neatly tied these two themes together.

A poster that caught my eye at Reading Station on my way home, was for the latest estate being built outside of Reading. Built in parkland, said the blurb, and as the film said, the only parkland would be what the development was destroying.

Anyone who knows anything about the illegal war on Iraq will know Jo Wilding kept a diary of what she saw. There is now a film, A Letter to the Prime Minister (Julia Guest), and this was the last showing in Screen 2: The Ledge on the Edge.

A film covering similar material, although not shown at BeyondTV 2005, is Testimonies from Fallujah.

The two rooms with the screenings, Screen 1: The Edge and Screen 2: The Ledge on the Edge, had far better image quality than we had seen last year in the Patti.

I have only covered a fraction of the films screened. A pleasant change from last year, was the lack of films of demos. Like green festivals, once you've seen one, you have seen them all. I'd question the showing of some of the films. Did we really need a film of the Glastonbury Festival or the Big Green Gathering?

A few stalls were available, but not as many as last year. We need more stalls.

I was pleased a women's action group took up my suggestion at the Anarchist Bookfair and had a stall. Not only that, they also had a film showing, which they spoke on.

The Pod Report was out and about recording live interviews during the festival. These will be podcast over the next few weeks on the net. One went out on Monday 28 November 2005. To hear them you need to subscribe:

A lot of hard work had been put in by Undercurrents to make the BeyondTV event possible, and the success that it is. The staff at the Dylan Thomas Centre were also marvelous. And a special mention of the lovely Bridget.

Bridget was there until the early hours of the morning when we all finally left after Friday night. I got up Saturday morning, had breakfast, and went back to bed. Bridget was there at 9-30am Saturday morning and remained on duty until the early hours of Sunday morning when the last of us finally departed. She was back on again at 9-30am Sunday morning, and was on until late afternoon. Bridget multi-tasks, not only was she running the reception over the weekend, she was also running the cafe.

A hope for next year is that the festival is a little earlier in the year, say end of September or early October when the weather is not so cold.

An absolute must is make these films available at the event. Maybe it is not that easy, but I'm sure, many people inspired by what they saw, would want copies to take home to share with their mates. Otherwise all you have is faded memory and showing to what are mainly the already committed.

As last year, the festival was timed to coincide with a green festival on the Sunday. This year it was held in the National Waterfront Museum.

If you have been to one green festival, you've seen them all. A lot of well meaning people, going nowhere fast, addressing the symptoms not the root causes.

This green festival was no exception, and I whizzed round it even quicker than last year.

The museum itself was another matter. From the outside, from the main road, it is an eyesore, but inside it is stunning. An old Victorian building has been gutted, exposing the iron columns. It is open and airy, and houses the museum of the 21st century. From the balcony there are stunning views over the marina.

BeyondTV is a refreshing change to the crap pumped out by the mainstream media.