There is no such thing as an Indonesian anti-corruption body 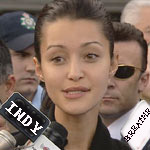 Leslie judges
under the
thumb!

AUSTRALIA: A corrupt Indonesian government has now suggested that its anti-corruption body says it is investigating the judges who presided over the trial of Australian model Michelle Leslie on drug charges.

But in Indonesia where they sanction state terror, there cannot be any such thing as an Anti-corruption body because the government in Indonesia is corrupt from the top down, but not for a song!

I'm helpless about the way of me. I'm thinking, thinking about it all. I'm sorting everything inside.

A Balinese court convicted Leslie after she was found in possession of two ecstasy pills and sentenced her to three months in jail.

Leslie was freed the day after the verdict was handed down as the judges took into account the time she had spent in jail during the trial.

After taking bribes the corrupt Indonesian government says its corrupt National Judicial Commission, which oversees judges in Indonesia, has confirmed that it is investigating the three-person panel responsible for the decision.

Say again? How can a filthy corrupt Indonesian government try and tell the world that they are going to get their national commission (that can only be corrupt) to investigate anything? And be believed?

An official says the sentence is regarded as being too lenient.

Sure, she should have at least got the death penalty?

How many pills would that take, you dog person?

See through me when I put up a fight. Like you to see the things I hide. Go deeper than I won't let you know. I'm frightened but I won't let it show.

The commission is a set-up, a propaganda tool and a mechanism to try and bail out an embarrassed Indonesian government before the eyes of the world.

What right have the pro-government media institutions here got to try and brainwash the Australian people with nonsense and whitewash from the Indonesian authorities, trying to cover up their misdeeds?

This case is not as bad as blowing people up on the dance floor, in the cafes or at work at the Embassy because if that were what they were investigating then they'd have to start from the top down, in Indonesia.

I'm helpless about the way of me. I'm thinking, thinking about it all. I'm sorting everything inside.

They'll tell you that the commission was set up earlier this year to root out corruption in the judicial system, but not from the top down?

They claim that since its inception it has investigated 280 cases but has returned a corruption verdict in only one case.

See! Nothing wrong with them! I believe you?

The corrupt Indonesian police say that Ms Leslie was arrested at a dance party in August after two tablets of ecstasy were found in her handbag.

Why is the Prime Minister so angry: Leslie

For those unfamiliar with Bali's Kerobokan jail, she offered a quick verbal tour. Her cell was "infested with cockroaches and had no ventilation and no sunlight".

Sure, we should be really angry now, that these terrorists should plot to blow up the Bali mourners! And that should buy hoWARd the coward a free kick to any draconian laws that he now seeks to enforce, based on the communities deep emotions, anguish and fears of another attack?

Why shouldn't you be convinced after all gunaratna says he's a dr and reported to be a 'terrorist expert'? He even lives in Indonesia surrounded by bombs going off in his own backyard. But even with his alleged expertise it has only led to even more relentless and 'subsequent bombings' in Indonesia. So I suppose that's how you know you need an expert?

Now these men have been chosen as scapegoats for the State sanctioned terror and will be prosecuted under an anti-terror law that carries the death penalty for allegedly assisting the perpetrators of a bombing.