Air industry executives were forced to scuttle from coaches to the safety of Tower Bridge tonight, as a small but noisy protest took them to task over the UK's air expansion plans.

Delegates arriving for a morale boosting dinner high above Tower Bridge were shielded by a line of police whilst subjected to jeers and chants of "Shame". A WPC blocked me from photographing the event until I provided a Press Card. 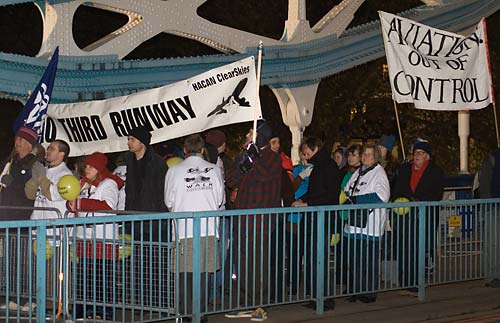 Protesters on the Bridge 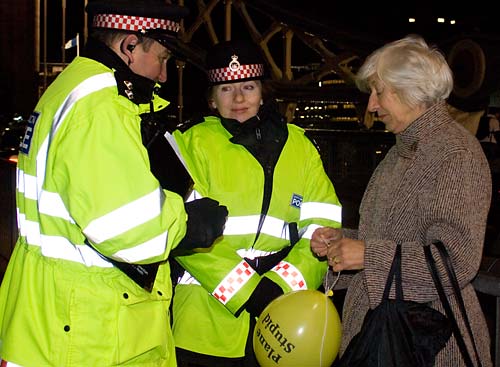 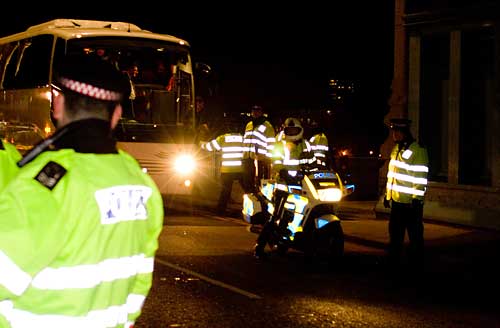 A delegate coach pulls up shielded by police 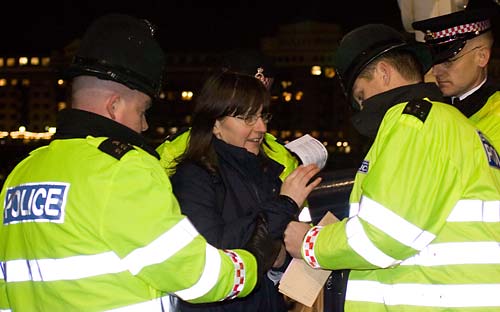 Arrested under an ancient byelaw.

City of London Police closed off the western side of the bridge, creating a protest pen some hundred yards from the arriving guests. To drive home the point they occasionally filled the gap with a couple of alsatians.

FIT filming on the eastern side was more subtle than usual, but police had unearthed an ancient bye-law preventing anyone from standing still.

As a bye-law this is of course not an arrestable offense.

Except that City cops decided that refusing to comply - such as stopping to give out leaflets - is an arrestable offense, after which they made arrests under Section 25 of PACE.

Protesters made up a wide spectrum, from Critical Mass (who made two passes), Rising Tide, HACAN and NOTRAG (No Third Runway Group). Being by no means full time activists, the Heathrow based groups expressed surprise and disgust at the level and manner of policing. Several passed me their names to forward in case they were arrested.

Air transport is the fastest growing contributor to climate change. Fuelled by the cheap flight revolution, flights have doubled in the UK in the past 20 years, and are set to double again in 15. The UK plans to build 4 new Heathrow sized airports by 2020.

And as Blair bangs on about fighting climate change, aviation fuel remains untaxed, so each individual taxpayer subsidises the aviation industry to the average tune of £500 per year.

I am the person in the tweed coat being given a strict talking to by the police. They wanted me to join the group of protesters on the other side of the bridge which I refused to do. I was accused of loittering amongst other things and they said they could arrest me for either that or causing an obstruction under an old bylaw covering the bridge. At the point the photgraph was taken I really thought they were going to arrest me. I think they might have if the camera man had not been so close. Eventually I was allowed to stay where I wanted to be with my own policewomen walking up and down with me for about an hour & a half!!!!!! Nevertheless we were in a very good position just by the side of the cameraman when he took photos of the the delegates scutling into the entrance to dining room on the bridge,and we were able to roar "GO HOME" at them. All in all a very enjoyable night out. Thanks everyone