On Friday 25th November up to 600 women took to the streets of London to "Reclaim the Night" - as they marched from Soho Square to a rally at the University of London Union (see pics).

Reclaim The Night (also known as 'Take Back the Night') began in Northern England during the 1970s to protest against the fear that women felt walking in the streets at night. The action was held on 25th November, The United Nations International Day To End Violence Against Women, and was part of 16 days of activism against gender violence. The London Feminist Network was demanding a number of measures including culturally-specific counselling for women who have experienced sexual violence and for an audit of London transport safety.

An Amnesty International UK report recently revealed shockingly low knowledge about the scale of sexual violence against women in this country and worrying attitudes towards such crime. Every year there are thought to be up to 50,000 rapes in the UK. Currently only 5.6% of rapes reported to the police result in conviction. 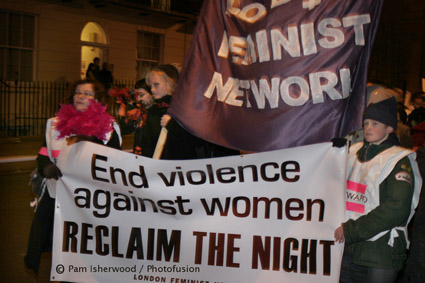 Andrea Dworkin (You can call me dork)

Them bloody women again are out of the house.

Who know what the definition of patriarchy is then? 1) No women on top 2) no topless women or 3) women can be on top but as long as it’s only brief and indoors.

A brave move though I would be scared shitless walking through places like that. By the way did any one notice that it’s the 21st century? And still we get told that women are just supposed to accept that they have not rights or that if they accidentally flirt then that means that men can wave away any responsibility for their actions and tell us that women should control themselves better.

good to see sensable debate about this issue.

I always say that if you can't manage a sentence without swearing then you're views shouldn't be taken to seriously.

Let's be sensable (sic) about this!

Is that Prince Harry on the right of the picture in a dwarves hat?

I thought only women were allowed on the march?

It's not a joke

Thanks for your reply and just to say that I didn't mean my comment as a joke but more as a point that there are a lot of people who don't take these issues seriously. Sometimes when such violence happens people just joke it off as a cover and that just makes the violence even more sick. In addition I am very much of the opinion that a lot of violence comes from unequal and what is seen as normal power relations i.e. it's normal for men to assume the role of decision makers and exclude women. Surley it would be a much more ballanced world at least if women has as much independance and participation in decision making.

I find some of the issues raised in the related articles very hard and upsetting. I was left feeling quite violent and disturbed all week after reading the related reports so ~I talked to some peolple.

Really sorry to hear of such barbarities and I do hope that someting is done to challenge a lot of the sexist behviours that women must experience on a daily basis.

if i am wud i be acceptd by u,
i hope i wud because i need help.
i want To com om yur marches butr im not sure

Mainstream feminism tells us that girls are in constant danger of being sexually abused by their fathers, that women face the same from their husbands, etc. Ifeminism says to get the state out of personal issues. Wouldn't your individualist stance would leave all these victims without protection?

First, we must recognize that the alarmism of mainstream feminism often blows problems way out of proportion and reports them out of context. It is true that some men abuse. However, the vast majority of men do not abuse, and most women are not at risk of abuse by the men in their family. Furthermore, studies also show that this is not a problem of male violence as portrayed by mainstream feminism.

*** Rather, women perpetrate violence against their children and spouses at rates that are at least comparable to those of men.*** This is not to say that abuse is not a significant problem. It just isn't the problem that mainstream feminism portrays it to be.

It is also important to recognize that governments in their quest for power have an incentive to create- not solve- problems and to disempower- not empower- those who would solve them. For example, governments offer the false protection of protective orders (a piece of paper) and police officers (who can't be everywhere at once). This leaves those who are targeted by abusers with less ability to protect themselves than they would have were individual rights respected instead.

Sexism and violence is a huge problem and to just deny it's existence surley can only lead to so much hurt, anger a friendless life. Sorry to post three times now but as a man I am offended by the constant violent pertrayal of men having power over women and for that to be quite normal. After years of working in factories I fullly inderstand that men are quite happy to pay for sex etc and when challenged can get quite upset. It also seems horrible that it is seen as quite acceptable for me to coerce women to give away control of thier own bodies simply to satisfy a man's pleasure's. Is that not the defination of slavery?

In addition should we not remeber that rape whilst married was considered accetable in the U.S. becasue essentially it was coniderded that when married the man owned the women. Seisim and sexual violence is a problem. When we can only relate in a way that half of our wolrd's population should be submissive then I feel that is not a healthy state of affairs.

And when these things are seen as quite normal i.e. for men to hold power and exclude women, then sexual violence can be easily brushed aside and uder the carpet and it is women that have to bear the brunt of men's egotistical power crase.

I like to make friends but how can people be friends with such unequal relationships of power. When women do 80% or more of the worlds work for what 5% of the rewards and what 1% of ownership of assets then that is a problem.

Just becasue of that thing that extrudes from between our legs I really don't think makes us deserve an obcence amout of power over the opposite sex.

Toby, do you find that grovelling helps to endear you to feminists?

Yes, they are and so are women. Many (female) prostitutes in the UK also service female clientele. This is not to mention internet gigolos who are ordered by hetero women. In Germany and Holland there are male brothels servicing female clients.

Additionally, male strippers are paid by groups of women to perform sex acts on, and in front of, them (Google cfnm and see what comes up, excuse the pun). Rich women pay for sex by having toy boys.

So, is it any of your business to challenge anybody about their sexual behaviour? No, I don't think so. So, please don't impose you moral standards on others.

"for men to hold power and exclude women,"

Unless you are stuck in a time warp then you may not have noticed that many of the things you quote have not been the case for at least 40 years and some of the things for about 100 years. Do you recall that the UK had a woman PM for 11 years?!!!

"When women do 80% or more of the worlds work for what 5% of the rewards and what 1% of ownership of assets then that is a problem."

This is nonsense. Where did you get this from, some book by Andrea Dworkin, whom I hasten to add was a millionaire. A recent UK study showed that 66% of millionaires between the ages of 18 and 24 are women. Also, there are now more women than men being accepted as doctors and lawyers. This has been the case in the US for some years.

Do you know how much money doctors and lawyers earn Toby? Well it's very often over £100,000 per year. For your info average earnings are £24,000 per year. So, I bet there are an awful lot of women out there earning a lot more than you or I.

I think that you may have succumbed to the feminist idea of all women as passive victims of all men. If you think about it, it doesn't make sense - the Queen is a woman, Thatcher was a woman PM, and many other examples.

When is the next march?

I can't wait for the next one!

So when will it be?

All that female love and unity, and then we can post pictures on Indymedia for everyone to admire, and they can comment about how clever we are!

Most accusations are false

The reason that there are so few convictions for rape is that the vast majority of rape allegations are false. This is what the objective evidence shows.

When the police and the juries have investigated all the claims, 95% result in no convictions.

So, tell me someone, where is the evidence to suggest that these men *should* have been convicted?

There is just feminist propaganda - and nothing else.

Even the professionals now believe that most rape allegations in the UK are false.

I, myself, have studied the rape research on and off for some seven years and my view is that the vast majority of accusations are false. I have also looked closely at the Home Office research and it is mostly a feminist-inspired conjuring trick.

"There is just feminist propaganda - and nothing else. "

Five dead women mourned - feminist propaganda ? The feminists killed them in a propaganda stunt ? Got any evidence you idiot ?

"Even the professionals now believe that most rape allegations in the UK are false."

Which professionals ? Really, back that up or prove yourself to be a self-excusing rapist.

"I, myself, have studied the rape research on and off for some seven years and my view is that the vast majority of accusations are false. I have also looked closely at the Home Office research and it is mostly a feminist-inspired conjuring trick."

If that were true why not name the sudies and link to them for rebuttal rather than relying on the cruiudest form of propagand. Simple lies repeated often.

why don't you provide some evidence rather than getting all high and mighty?......

not a potential rapist