The war against "Terrorvision"

Former Al Jazeera English staffer, American-Palestinian journalist Ramzy Baroud , is the latest in a line of Al Jazeera journalists to feel the heat in the Bush Administration's "War on Terrorvision" 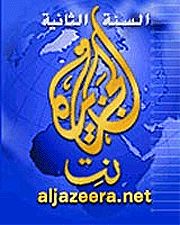 On Friday, Ramzy, who is also the editor of Palestine Chronicle went to the US Embassy in Brunei to have extra pages added to his passport, only to be told that he was on a "list". His passport has been confiscated and he has had to remain in Brunei, with instructions to return to the Embassy on Monday for further information. He cites his two years with Al Jazeera as a possible reason for the unexpected and serious development.

The Al Jazeera news station has become a new story in its own right in recent weeks, with two UK civil servants charged under the Official Secrets Act for leaking a document in which, allegedly, Bush threatened to BOMB the Al Jazeera HQ in Qatar , an ally of America's.

Meanwhile, BBC radio news this evening (Sunday 4th Nov) is reporting that the wife of Norman Kember , the kidnapped 74 year old British Volunteer with the Christian Peacemaker Teams in Iraq, has been appealing for Mr. Kember's release on Al Jazeera. The CPTers have been accused of spying, and reports indicate that their kidnappers will not release them until all prisoners in Allied and Iraqi jails are freed .

Al Jazeera last week carried footage of a bombing incident in which 10 US Marines are believed to have have died. Al Jazeera, claimed the footage, shot by the Islamic Army of Iraq, was of an incident near Fallujah last Thursday.

Al Jazeera has been a thorn in the side of the US/UK coalition's attempts to manage news coverage of the occupation through the use of embedded journalists.

The station has also aired videos, purported to be messages from missing bogeyman Osama Bin Laden. Tayseer Alouni,the Al Jazeera reporter who interviewed Bin Laden in 2001 was recently sentenced to seven years in Spain for "alleged collaboration with Al Qaeda"

Commenting in The Nation , Jeremy Scahill noted the implications of the Bush War on Al Jazeeera:

"Nothing puts the lie to the Bush Administration's absurd claim that it invaded Iraq to spread democracy throughout the Middle East more decisively than its ceaseless attacks on Al Jazeera, the institution that has done more than any other to break the stranglehold over information previously held by authoritarian forces, whether monarchs, military strongmen, occupiers or ayatollahs. The United States bombed its offices in Afghanistan in 2001, shelled the Basra hotel where Al Jazeera journalists were the only guests in April 2003, killed Iraq correspondent Tareq Ayoub a few days later in Baghdad and imprisoned several Al Jazeera reporters (including at Guantánamo), some of whom say they were tortured. In addition to the military attacks, the US-backed Iraqi government banned the network from reporting in Iraq."

The future isn't looking too bright for Al Jazeera reporters right now. One can only wonder what independent news source the self-proclaimed defenders of "freedom and democracy" will attack next.......

I was wrong about al-Jazeera

Don't Bomb Us - A blog by Al Jazeera Staffers