Ms Jamal said yesterday that depicting her brother as a terrorist was unfair. She said she knew her older brother better than anyone and that his bad past had nothing to do with terrorism. 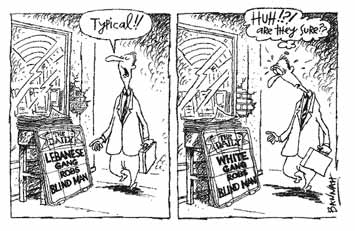 Denied her brother wants to harm!

AUSTRALIA: THE sister of Saleh Jamal has denied her brother wants to harm Australia or Australians, despite the lies purported by the Un-Australian Newspaper yesterday.

A message to the Australian people by the Un-Australian Newspaper on the eve of the hoWARd dictatorship's new Anti-Liberty Bill.

And no doubt to help secure allegations made against 6 of the scapegoats picked up last month, used to ramp up fear for the introduction of the hoWARd dictatorships new draconian laws.

And of course the reason why we need sedition laws according to the Un Australian Newspaper!

Ragda Jamal told the Un-Australian she and her mother speak every week with Jamal - who is serving a five-year jail term in Lebanon on weapons charges - and that he had never expressed such a sentiment as they had reported.

"There is no way he could do a terrorist attack," Ms Jamal said from her home in southwest Sydney. "He has lived here all his life."

The Un-Australian reported yesterday that police had offered Jamal a reduced prison term if he returned to Australia, pleaded guilty to planning an attack on Sydney Harbour. They said!

He also had to verbal 6 scapegoats

The six scapegoats arrested last month during a cross-country ASIO fishing expedition for john hoWARd's war on terror, (which is terror).

That's what it was really all about wasn't it prime meanster?

john hoWARd the cowards new Anti-Liberty Bill and how to line up scapegoats by bribing an informant in a foreign country with little regard for law as we know it.

Also getting Jamal to plead guilty over the Lakemba police shooting so the cops don't have to explain why they were being shot at was part of the 'package'?

He said, she said?

We don't need to invent new laws to prosecute licensed public publishers for lying to the Australian people do we?

The Un-Australian under the federal Anti-Terror Bill No2, which has yet to be enacted, such statements as those purported by the Un-Australian that Jamal allegedly said, could lead to charges of threatening a terrorist attack.

Now you can see how easy it is to be lined up and prosecuted all because a licensed publisher spewed out bullshit in someone else's name. Not because Jamal said it but because the Un-Australian verballed him and according to police today, them too.

The Un-Australian: "The new laws will have an extra-territorial power to allow them to be applied anywhere in the world to people making statements threatening Australia. However, they will not be retrospective.

The Un-Australian: "NSW police confirmed officers visited Jamal in Romieh prison, north of Beirut. But a police spokesman denied he was offered a deal if he turned informant." They said!

What he didn't say was that getting people in foreign countries to verbal scapegoats in Australia is a sick joke!

Sleazley: "In criminal investigations ... police will operationally, from time to time, make offerings to some people in order to collect evidence on others - standard practice," Sleazley said.

Standard practice in Lebanon? 60 per cent reduction or gulag treatment? A quick ten years or be tortured? Boy I'm glad we have opposition?

Jamal, who fled Australia on a false passport after being charged over a shooting incident at the Lakemba police station in 1998, was allegedly a demon with lots of links, cells and plots, as well as farts that stink emanating from the central dictatorship figure john hoWARd the coward in his war on terror, (which is terror).

The Un-Australian: "I have learned a lot more about explosives since I've been (in jail) and what they were thinking was ridiculous", they said, he said?

The Un-Australian: "At the time he fled to Lebanon, he was also the target of a investigation that became Operation Pendennis and led to 18 men being charged with terrorism-related offences after police swooped on houses in Sydney and Melbourne last month", they said, that the police said?

Ms Jamal said yesterday that depicting her brother as a terrorist was unfair. She said she knew her older brother better than anyone and that his bad past had nothing to do with terrorism.

Jamal had told the family that he wanted to finish his jail sentence and come home to Australia to be with his wife and young child, his sister said.

"He wants to start a proper family life but he feels that (the federal Government) won't leave him alone," she said.

Here we go round the scapegoat bush!

Now how do you secure 18 men on false and misleading charges made during a 'scapegoat' 'fishing expedition' last month? You get some poor soul locked up in a military prison in Lebanon to verbal them by offering him a bribe! Shame hoWARd, shame on you!

"This treatment is very cruel and inhumane and what I've put forward to the Premier Morris Iemma to intervene and put an end to this scandal," he said.

While the NSW legislation does provide for oversight by the courts rather than leaving it to the discretion of the police or intelligence agencies, there are many murky areas that could hurt many innocent people.

"My deep concern is that so many people are unaware of just how these new laws will impact upon their lives and their families," she said.