TODAY (5th Dec) is Jeff Luers's birthday, he will be 27, and he will be spending it in an American maximum security prison (pictured above) serving a sentence of 22 years and eight months. 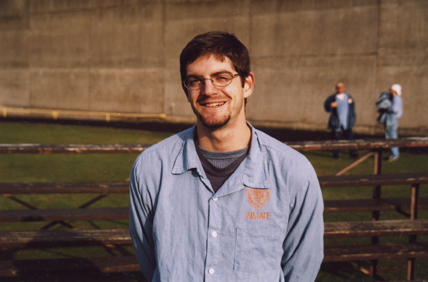 Jeff Luers has been in prison now for 5 years. He needs and deserves the support of every man woman and child on Earth.

If something is not done about it, he can expect to spend another 17 birthdays, locked up for a 'crazy' act of passion; trying to save humanity and the planet that sustains us, which we are systematically destroying.

Five years ago, Jeff Luers and a friend went to a car dealers parking lot in Oregon, USA, and set a light to three SUV cars. Most people will agree this was a very miss guided act of 'eco rage' against the existence of these gasoline guzzeling beasts. Apart from anything else burning cars is extreamly harmful to the enviornment; SUV's should be either recycled into bicycles, or given to the UN to use in climate change disaster zones.

However, it does not deserve 22 years, 8 months in prison.

A comparison of sentences given in the same state shows rapists, child molestors, other far more destructive arsonists, and a man who attempted murder with an axe getting far less severe sentences.

Jeff Luers is very much a political prisoner; his sentence proves it.

He first came to the attention of the authorities and the powerful logging companies, when he started trying to save the giant red wood trees, part of the American national heratige, which they wanted to chop down for profit.

He built tree houses at the top of the trees and chained himself to them, blocking the interests of one of the most powerfull vested interest groups in America.

What Jeff Luers did was wrong, but so was his sentence, and two wrongs don't make for justice: he should be released now.

Even if you do not agree with what he did, Jeff Luers deserves your support, and the support of every man, woman, and child on this planet, because it was the planet he was trying to save.

His crime of passion involved no danger to life or limb and the three cars he burnt were insured.

A worldwide campaign for his release is underway, which will not stop until he is free, and you can help.

1. Raise this issue where ever you can. If you belong to an environmental action group, raise the issue at a meeting, and discuss what support you can give as a group.

2. A legal appeal about the length of his sentence is under way, but it needs financial support. Send a donation however small, it's the thought that counts. The more different groups and individuals that give a donation, the more pressure there is on the US authorities to do something. Try to get a local group to make a donation.

3. Write to Jeff and to the Governor of Oregon (details below).

4. Organise an event for the International Day of Solidarity.

5. Get information up on a website, blog or news group.

6. Think of something yourself, and do it. Also let us know.

Write to the Governor of Oregon: