At around 3.30 yesterday morning near the village of Venaus in Piedmont’s Susa Valley, police attacked and forcibly evicted locals and activists who had been peacefully occupying the valley for the past week in protest against plans to construct a High Velocity Train line and tunnel linking Turin with Lyon. 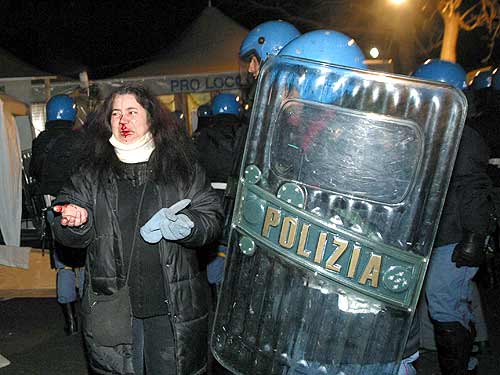 According to reports, more than ten people were injured and three arrested as police moved in with bulldozers, kicking and beating sleeping protesters and destroying barricades and hospitality structures erected during the occupation of a site where work is due to begin on the new High Velocity train link between Turin and Lyon. One elderly inhabitant of the valley who suffered a coronary after being truncheoned in the stomach was admitted to hospital where his condition is said to be stable. Others injured included several news photographers.
There was widespread condemnation of the violence later in the day from leading left-wing and some centre-left politicians, along with calls for the resignation of the police commander who led the assault - inciting his men to “kill them all” according to several witnesses - and the Minister of the Interior, Giuseppe Pisanu who defended the police action, claiming that the valley-dwellers’ protest had been manipulated by ‘extremists,’ a claim hotly denied by the mayors of the communities involved.
Indeed the entire population of the Susa Valley have continued to reaffirm their opposition to the controversial project, which they say is unnecessary and environmentally dangerous. The mountains where the tunnel is to be excavated are known to contain significant deposits of asbestos and uranium and there has been mounting criticism from several quarters regarding the project's economic usefulness. Also not without significance is the fact that the company awarded the contract for the project is part-owned by the wife of Italy’s Minister of Transport, Pietro Lunardi. Yesterday morning’s violent action has shown that local and national government and their supporting financial lobbies are determined to go ahead with the rail-link, which they claim is vital to Italy’s economic future, even if it means ignoring the collective will of the local population and resorting to anti-democratic and authoritarian measures.
Meanwhile, there were numerous strikes and demonstrations across Italy during the day in solidarity with the valley’s inhabitants, while several railway stations and motorways in the Susa area were occupied, blocking traffic for several hours, to which police responded with further violence. More demonstrations and disruptions are planned over the next few days.

For more information go to: