Campaigners against EDO MBM (Smash EDO), a Brighton factory manufacturing electrical weapons components for conflicts in Iraq and Palestine, have been fighting for their right to protest as EDO MBM, backed by Sussex Police, have applied for an injunction under the Protection from Harassment Act.

Smash EDO call on everyone who cares about freedom to protest to join them on Dec 10th, 12 noon, Churchill Square, Brighton. 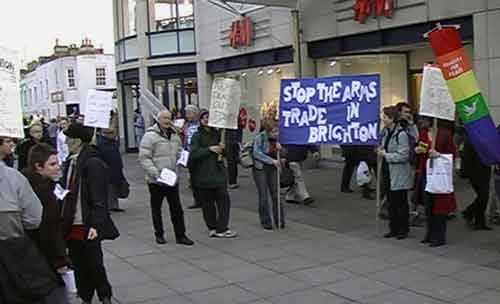 Sussex police have threatened to arrest demonstrators planning to March through Brighton on Dec 10th to protest against EDO MBM, a factory manufacturing electrical components for arms in Mouslecoomb.

The march on 10th December starts in Churchill Square, Brighton, at 12 noon. It comes six months after EDO MBM applied for an injunction to limit protests outside their factory.

Under the terms of a high court interim injunction brought under the Protection from Harassment Act (PHA) 1997 protesters may not step in the road opposite the factory or take photographs of employees (including security guards). The injunction has lead to the criminalisation of many protesters including two who have been remanded in HMP Lewes.

Several protesters are currently defending themselves in the High Court against allegations that their protests have harassed employees, they argue that the injunction jeopardises their right to protest.

The planned march could be the biggest yet in the 18 month old campaign and will come soon after the high court decides whether or not to extend the injunction.

Sussex Police have threatened to arrest protesters unless the route of the march is preorganised. At the last March, in August 2005, several protesters were arrested after the Police imposed conditions on the demonstration under Section 12 of the Public Order Act.

This police action was part of a wider tactic of coming down heavily on unplanned public demonstrations. A march protesting at the destruction of Titnore Woods, Worthing was dealt with in the same way and police issued threats to London's critical mass last month.

This is an example of the police pushing the boundaries of their existing powers. New laws state that unplanned demonstrations are illegal in Parliament Square, police are trying to extend this to the rest of the country.

London's critical mass went ahead despite threats because of the huge solidarity response of activists who did not want to see it crushed see. Similarly, Smash EDO are calling for activists who want to protect the right to protest to join the march on December 10th.

This time we will march.

Groups and individuals are travelling down from London to show collective solidarity with those in Brighton. We will be assembling at 9.45am at Victoria Station, in the Weatherspoons pub above the WHSmith. Train tickets are only £8.40 return. It's gonna be fun!

Another video of the march

The police hail the success of their 'softly softly' approach to Smash EDO - video/quicktime 3.7M

Another video showing the total overpolicing of the Smash EDO march.

Do the police in this country really want to be seen as and act like an unaccountable private army? Because that is exactly what they become when they decide to rip up decades of progress on making peaceful laws. However presently the uk are fighting an illegal war in Iraq and other places for their economic interests, to boost national pride and to make sure the Royal Britannia carries on it’s rain of terror and expansion. So what if a few or a few thousand Iraqi’s, civilians and our boys too are killed or maimed, we need a strong industry, jobs for the boys and to make sure no one wants to mess with us.

However the right to peaceful protest is legally recognised as an inalienable human right, what ever that might mean. What it should mean is that if a group chooses to protest then that is up to them and the police have no grounds to prosecute for peaceful actions. However my suspicion is that perhaps EDO MBM have nicked themselves some uniforms and put their boys out to beat up a few hippies and make sure they can do their business without any questions asked. Perhaps they have put a deal together with the boys in blue too and that they have got fed up with having to enforce the law and want a bit of a change.

So if the police make the choice that they want to not recognise laws that have been developed by the legal institutions are they essentially an unaccountable private army?

You say that "peaceful protest is legally recognised as an inalienable human right", and that "these laws have been developed by legal institutions". What laws did you have in mind? In England there is no written constitution, so people do have have any specific 'rights' - people are allowed to do anything they want that isn't specifically banned by law.

No one has ever had the 'right' to protest, peacefully or otherwise - there are no laws preventing the police or government intervening in protests - only laws that prevent people from protesting.

And when you use the phrase 'unaccountable private army' - that's what the police are by definition.

1) They accountable only to the state, (ie unaccountable to the population.) They exist to protect the interests of the state, ie protect property rights.

2) In that sense, they are also 'private' - they are controlled by people whose interests are in the continued existance of the state, property rights, and the protection of corporations ability to make money without inhibitions. This interests are directly opposed of the majority of the population.

3) They are precisely an 'army' - a special body of people that imposes the will of the state, with the backing of other state apparatus - legal institutions, prisons, etc. The police now perform functions that the army used to a couple of hundred years ago, before the police existed - the army was deployed to squash the Luddites - if the police had existed then, they would been used instead.
The police / army distinction is in geography only: two different names given to the bodies that protect property interests 1) at home = EDO offices, etc, and 2) abroad = Iraqi oil etc. The only reason the word 'army' has stronger connotations than 'police' is that they have bigger guns / use more violence. That's only because people prefer to be oppresed by their own governments, rather than others. So when we send our 'international police' abroad, they need tanks to deal with the resistance they meet; our 'internal police' can (usually...) make do with a stick.


But they are not an unaccountable private army because they "make the choice that they want to not recognise laws that have been developed by the legal institutions", firstly because they don't choose what to do, since their actions are dictated by home office policy, and secondly because they breaking any laws.


I don't mean to sound defeatist though! The fact that our rights are not enshrined is all the more incentive to fight to stop the government eroding our freedoms even further.

A very informing piece of writing and now I just feel even more angry. Yeh well so we have no rights then I should have reliased that. But don't that state answer to the peolpe? Do we have no freedoms in this country any more then.

Yeh your right J thee is no constitution in this country and we aregoverned by common law. What about codes of conduct at least? I don't know perhaps a couple of bashes on a hippies head is o.k. as long as it doesn't casue alarm and distress then that o.k.

what about the un constitution on human rights? surely if those rights are infringed upon, we could go to the un over it? i mean, it aint much, and i am aware of the (extremely) numerous breaches of the constitution that happen daily, but still, dont they count for some legally enshrined "rights" in this country?

re: Another video of the march

I don't know about anyone else, but all i got was audio.

re: Another video of the march

You might need to update your version of Quicktime. I'll try to put an AVI up ASAP.