Merseyside and The Palestinians

Palestine continues to be one of the major issues for activists on Merseyside with film showings, music nights and a stunning student twinning campaign all in the past few weeks. 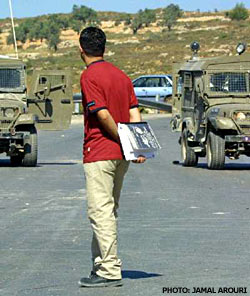 Liverpool University Guild of Students has finally realised the long fought for dream of twinning with Birzeit University Students Union in Ramallah. The campaign began in the summer of 2003 when a large group of activists at the University attempted to show solidarity with the Students of Birzeit, who made a call out to support their Right to Education.

http://right2edu.birzeit.edu/news/article5 Birzeit students loose on average a third of their study days each year, because of Israeli roadblocks, curfews and other aspects of the occupation.

It was decided that the best way to tackle the campaign was to call for an Extraordinary General Meeting in the Guild and pass a motion twinning the two institutions. This required a certain percentage of students (about 500) to turn up at a certain time and then debate and vote on the motion. The campaign was filibustered, lied about, people were intimidated and one member of NUS NEC who turned up on the day was assaulted. Despite this over 450 students attempted to vote on the day, but unfortunately the numbers were not enough and so the motion failed.

The motion then returned in a standard fashion, was voted upon and passed by the elected Guild Council, but not before certain amendments, which linked Birzeit to bomb making and suicide attacks, were inserted. Birzeit students were offended by the amendments and so the originally motion was resubmitted last month and passed with a clear majority. The student newspaper ran a (deliberately?) misinformed article on its front page this week, (

http://www.liverpoolguild.com/main/media/liverpoolstudent/latest)
suggesting that outside agencies were behind the motion and that activists have snuck the issue through without informing the student body.

There is a planned ‘Twinning Ceremony’ for the new year to celebrate the event, which will hopefully include representatives from Bizeit, speaker meetings, workshops, cultural exhibitions and an unveiling of a plaque.

Students at Birzeit are, apparently, loving it.

It is unfortunate that more people didn’t turn out for the genuinely unique and informative presentations by on Palestine a week last Tuesday. The audience of around 30-40 people gathered in the Friends Meeting House on Paradise Street and stayed until the Quakers were threatening violent eviction for over staying the allotted time.

The first presentation was entitled ‘Homeland to Diaspora’ 1830-1967 and covered a period of history often ignored. The pictures were unique and informative. The audience were surprised at the Palestinians in western in dress, living in large and extravagant housing. The presentation covered the first three intifadas by the Palestinians, upset by the mass immigration and British occupation. Similarities were drawn between the British and Israeli tactics.

The second Presentation focussed on University life under occupation; the pictures were both inspiring and upsetting, as the speaker talked about his friends and colleagues who had been shot by Israeli troops in the past few years.

A debate followed the presentations focussing on possible solutions to the ongoing conflict. Some people argued that a two state solution was the only possibility of peace and that campaigns should focus around getting the best deal for the oppressed Palestinians. However others, including prominent members of the Palestinian Diaspora in Liverpool argued for the Human Right to return to their home land; furthermore they pointed out that as long as Israel remained a racist state their would be no hope for any Palestinians who lived inside Israel’s borders.

‘To Exist Is To Resist’

The Liverpool Student Friends of Palestine fundraising event, organised by Extravoganzamania Productions was a massive success. The evening, upstairs at Hannah’s on Hardman Street, attracted around 150 people and raised over £300 for campaigning purposes.

Despite acts cancelling at the last minute and some technical difficulties, Extravoganzamania’s Ginger said, ‘The event was amazing,. It’s great to see this many people turn up to an event in aid of Palestine on a Friday night when there is so much other stuff going on. Everyone is having a great time; it is a brilliantly eclectic mix of music and will mean that local campaigning can continue.’