Journalists are meant to be passive observers not instigators of violence – yet tonight I was assaulted by staff from Hong Kong’s two major TV news broadcasters, ATV and TVB. 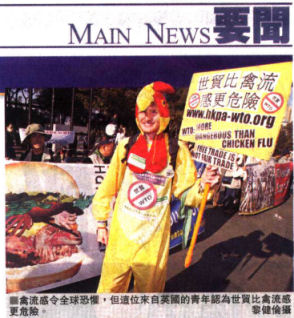 I am a British citizen protesting in Hong Kong – I have been dressed as a chicken with a sign dubbed ‘WTO – More Dangerous Than Chicken Flu’, demonstrating and distributing leaflets to raise awareness of the WTO’s true nature.

Journalists are meant to be passive observers not instigators of violence – yet tonight I was assaulted by staff from Hong Kong’s two major TV news broadcasters, ATV and TVB.

I performed some peaceful, verbal direct action against ATV during a live report. Using a megaphone I stood next to the reporter and shouted that 99% of protestors are peaceful, that they should cover real news and film where most protestors are (rather than against the dramatic backdrop of riot police). I said their journalism was lazy and scare-mongering.

Two ATV employees then violently tackled me away, preventing me from talking, using excessive force. I repeated the action when TVB took to the air live, also questioning why their reporter had dramatically donned a riot helmet. Their light operator violently pushed me a way, prompting several other people to protect me.

I repeated my actions with TVB during subsequent recordings. All those involved in both channels refused to show their ID proving they are WTO-approved reporters.

On Monday, both channels reported rumours that protestors had stolen security uniforms and that gas masks had been purchased in mass. I found this to be an attempt to create a climate of fear to undermine the message of the protestors, and tried to take action.