On Monday December 12th, an explosion took place in Mkalles Area north of Beirut, killing MP Jubran Tueni and three of his companions. As the General Manager of An-Nahar newspaper, Tueni often wrote in opposition to the Syrian's governments interference in Lebanese political affairs. 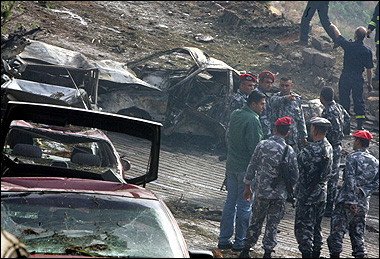 Tueni is the third journalist to be targeted for assassination in 2005, after the late Samir Kassir also of Al-Nahar newspaper, and May Chidiak of LBC TV. The Independent Media Center of Beirut strongly condemns this assassination and the ongoing targeting of journalists in Lebanon as an attack on the freedom of the press. We extend our condolences to MP Tueni's family and loved ones.
Pictures here ->