The Lebanese authorities have discovered mass graves near the town of Anjar in the Beka'a Valley over the past week. The discovery of this site, along with another one discovered last month in the Ministry of Defence compound, have sparked a series of speculations and condemnations. 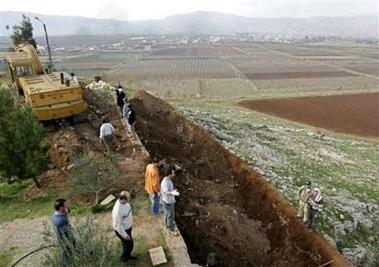 The latest grave site was near a Syrian army and intelligence headquarters. This command post was notorious among the Lebanese for the horrors that used to take place during interrogation by the Syrian intelligence.

Some politicians are using this incident as a pretext to launch political attacks based on their agendas. On his last speech to Parliament prior to his assasination, Right-wing MP Jubran Tueini has called on the government to investigate President Emile Lahoud for the mass grave uncovered at the Ministry of Defense at Yarzeh. This grave contained seventeen Lebanese Army soldiers and four civilians (including one cleric) who were killed during a battle against the Syrian Army in 1991 when the Syrians toppled General Michel Aoun. Lahoud was the head of the army at that time, and he had close ties to Syria.

MP Tueini was also pushing for the idea of distinction between these newly-discovered graves that are used to cover atrocities committed by the Syrian Army after the end of the civil war in 1991, and other still-unknown mass graves that hide massacres of the 1975-1990 civil war, citing the Lebanese General Amnesty Law.

Lebanon has passed a General Amnesty Law in March 1991, shortly after the end of the civil war. The law, which was passed by a parliament closely allied to the various warring militias, gave amnesty to all politically-motivated war crimes and crimes against humanity committed during the civil war. This has effectively allowed warlords to escape prosecution and hold high posts in later governments until present day.

Many politicians consider this matter a political minefield because many of them were directly involved in the events that took place during the civil war. However, several civil society organizations are demanding the government to investigate and uncover ALL mass graves that might still exist. The Committee of Parents of the Kidnapped and Missing Persons in Lebanon, for instance, has been active in pressuring the government on this issue to help determine the fate of their missing relatives. Many still do not know whether their loved ones are dead or still held in Syrian jails. The committee believes that there are around 35 such mass graves throughout the country, and unearthing them would bring to several families' agonies to closure.

One of these grave sites, according to Al-Diyar newspaper is in the village of Aintoura, where the right-wing Lebanese Phalanges militia is believed to have executed entire families associated with the SSNP party in 1984.

Another suspected grave site is believed to be near the notorious Barbara Checkpoint, controlled by the Lebanese Forces north of Lebanon. Ironically, the longtime commander of this checkpoint, Antoine Zahra, was elected into parliament during the last elections that took place this year. In an incident portraying the bizarre workings of Lebanese politics, MP Zahra was elected by the people of Tripoli and Dinnyeh areas, the very same people whom he used to persecute at the checkpoint during the civil war.

One famous war-era mass grave is the Sabra & Chatila burial site, which holds the remains of those who fell during the Sabra and Chatila massacares. These massaceres took place in 1982, when right-wing militias were admitted to defenceless Palestinian Refugee camps by the Israeli army and were given logistical support to 'wipe out terrorists'. The human death toll of these massacares is still unknown, and the numbers vary by the sources quoted from 700 to 3500.

Shiekh Maher Hammoud held a press conference in Sidon on Dec 9, where he made public the discovery of a mass grave containing the remains of 10 bodies on February 23th, 2005 in the town of Mrah al Habbas. He asked Samir Geagea, the leader of the Lebanese Forces, to come forward about this grave, which dates back to the 80s, when his militia was in control of the region. According to him, admittance of such terrible crimes would be the first step in the agonizing healing process.

Related Links:
++ Daily Star article on The Committee of Parents of the Kidnapped and Missing Persons in Lebanon

http://dailystar.com.lb/article.asp?edition_id=1&categ_id=1&article_id=20658
++ Wikipedia entry regarding Sabra and Chatila Massacares in 1982