An autonomous group of direct action activists have launched Target: WTO | Derail, Dismantle, Destroy as activists across Hong Kong, Asia, and around the world unite to destroy WTO for once and for all. 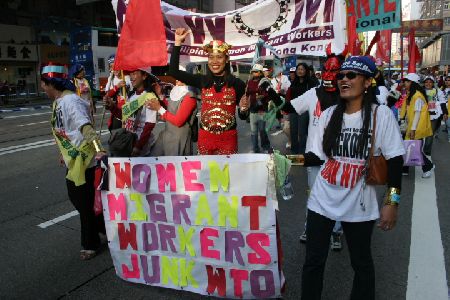 With WTO Ministerial Conference 3 disrupted in the Battle for Seattle, and the 5th one in Cancún derailed by activists and poor countries, a global resistance movement has built from all corners, going in all directions, to ensure WTO is derailed, dismantled, and destroyed once and for all. The WTO Ministerial Conference 6 is happening in the Hong Kong Convention and Exhibition Centre from December 13th to 18th, 2005. Poor people, people of colour, women, migrants, activist allies, and other groups struggling to survive under the neocolonial empire of rich nations are UNITING to hold a massive demonstration against the capitalist event with the tightest security. Stay Tuned to Target: WTO!