Report on the WTO Conference Day One Protect Actions 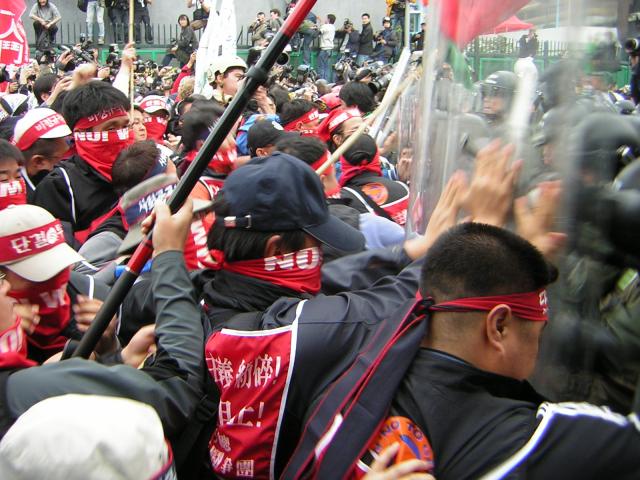 The Sixth Ministerial WTO Conference officially opened today afternoon at 3pm at Hong Kong Convention and Exhibition Centre (HKCEC). Anti-WTO demonstrators from various countries had staged several protest actions. Most protestors actively ensured the safety of these protest actions. However, at times, protestors could not stand the suppression from the police and had some confrontations. The police shot foam pepper sprays several times and used police rods to attack protestors. Yet, they think they were using “necessary violence” to counter the “non-peaceful” acts of protestors.

Around 200 South East Asian fishermen rode on two yachts to protest on the Victoria Harbour opposite HKCEC at 10am this morning. Yet, they were surrounded by six ships from the Marine Police. As the Marine Department did not allow yachts to approach HKCEC, four protesting fishermen jumped into the sea to swim. It didn’t result in any accidents.

At the same time, some protestors brought along protesting slogans and props to gather at the Victoria Park to start preparation for the Anti-WTO march in the afternoon. The Anti-WTO march set off from the Victoria Park, passed by Lok Hark Road and Gloucester Street and arrived at Wanchai cargo handling basin - the designated demonstration area which is quite far from the HKCEC. The police had set up barriers on the roadside. Up to 9,000 policemen were on standby. Shops in Wanchai received phone alerts earlier on to ask them to close their shops. Several schools in Wanchai were also closed today upon government’s request.

The front of the march set off from the Victoria Park at 2:10 p.m. The march was in order all the while, following the instructions from the organiser. It was similar to the carnival atmosphere like the Sunday march. In the march, slogans, songs, music and dance in different languages, as well as different national attires could be seen and heard. Many citizens observed the march on the way. There were no confrontation between citizens and the demonstrators. Around 3pm., People-Reporter witnessed some people threw down water bottles from high-rise buildings. The bottles were mainly targeted at South Korean protestors. Fortunately, they only made protestors’ clothes wet without any injuries. The marchers reached Wanchai cargo handling basin from around 3 pm to 4 pm. Yet, although the march had finished, the police continued to close certain streets.

The Police Shot Foam Pepper Spray at Demonstrators and People-Reporters

At 4pm-4:15pm, around 60 Anti-WTO demonstrators jumped into the Victoria Harbour at the Wanchai cargo handling basic and swam in protest. The swimming protestors included Koreans and Hong Kong people. They wore life jackets and some were holding Korean national flags. The marine police observed their action. Some protestors tried to swim towards HKCEC but were surrounded by the police and could not get onshore. They later returned the demonstration area.

Apart from the demonstrators, some reporters and people-reporters were also shot by foam pepper spray. Among them was people-reporter Little Bear, who need to wash with water instantly. According to Little Bear, she was not directly hit by the spray and she recovered in a few minutes after another people-reporter helped her to clean. But a reporter in front of Little Bear was hit more directly by the spray and showed a painful face. Also, Legislative Councillor Long Hair, some activists and foreigners were also hit by the foam pepper spray. The standoff lasted for 10 minutes. Later on, the leader of the gathering asked demonstrators to be calm.

The demonstrators started to leave the demonstration area at 5pm. Some left behind and sat down for gathering. When they were leaving, there were still many anti-violence policemen holding shields, police rods and even guns on standby. As observed by people-reporters, even though the sitting farmer-protestors did not have any actions, the policemen approached them with police rods from time to time. Some local people shouted at the police to hold back their police rods and not to trigger any confrontation themselves.

At 8pm., South Korean demonstrators discovered that among the 60 Koreans who jumped into the sea earlier on, five of them were missing after they came onshore. They suspected that the police had arrested them. The protestors were not satisfied with the arrangement by the police and negotiated with the police outside the demonstration area. Some protestors stay in the area to sing and dance. The police claimed that they did not arrest or detain any protestors and bring in anti-violence policemen to stand by. Later on, the police said the missing protestors were just sent to the aids station and promised to bring them back. People-reporter later confirmed that the missing protestors were sent to Wanchai Fire Service Department. South Korean consulate brought clothes to them.

Late on, the police brought the five missing protestors back to the meet up with other Korean protestors. Five Korean demonstrators were wearing in grey, hand in hand on barefoot. They left the Fire Service Department together and walked towards Wanchai north. They were surrounded by reporters on the way. When they met up with others again, it was 9:15pm. South Korean protestors were singing when they left Ma Zi Road and prepared to leave peacefully on couch. But some local protestors were angry at local television reporters at TVB who wore helmets during the live broadcast of the evening news. They asked the TVB reporters to take off their helmets as they viewed this as a way to discredit the protestors. These local protestors shouted “shameful” at the reporters to show their dissatisfaction at TVB News Department.

Regarding the standoff at the designated demonstration area, WTO Ministerial Conference Chairperson John Tsang claimed the demonstrators used “non-peaceful methods” in their protest and felt “unfortunate and disappointed” about it. But he didn’t mention that the police used foam pepper spray to attack them. Chief Executive Donald Tsang said the police’s behaviour was “pretty good”.

Secretary for Security Ambrose Lee accused the protestors for “too radical” actions and “confronting the police lines”. He said the use of foam pepper spray by the police was “completely reasonable and legal”. He said the police handled the situation in a “tolerant and restraint manner” and “the police had the capability and determination to handle any sudden crises”. The police spokesperson further said the protestors used “non-peaceful ways” in their protest. He said they “should reflect on themselves”. In his eyes, the police was only “using the minimal and necessary violence” to handle them, as they considered the burning of the shrine could “have serious threat towards public safety”.

As observed by people-reporters, mainstream media like TVB, ATV, and MingPao instant news services focused on the lighting fire on the wooden shrine. But only some paper and clothes were lighted on fire but not the entire shrine. Apart from some people using empty plastic bottle and bamboos to hit back when attacked by shields, police rods and pepper spray from the police, the protesting South Korean farmers were pushing the fully equipped anti-violence policemen with their bodies only. The situation at the site was different from what Ambrose Lee and the police spokesperson said.

Hong Kong People’s Alliance on WTO said the protestors were pretty restrained today. The organizer didn’t agree to the burning of the shrine by South Korean demonstrators but they understood their feelings. Although some protestors jumped into the sea, the organizers regarded it as non-violent protest actions.

In today’s protest actions, three protestors entered hospital and two of them had left already. The police said two policemen were injured but they had left hospital already.

For pictures of today's protests

Pics of today's protest are available at