WTO Protests – You Cannot Speak If You Wear Too Little

I am a Hong Kong girl who went to protests today in the Victoria Park. My idea today, was to launch an action. It was a peaceful one. Yet, I was besieged by more than ten policemen. 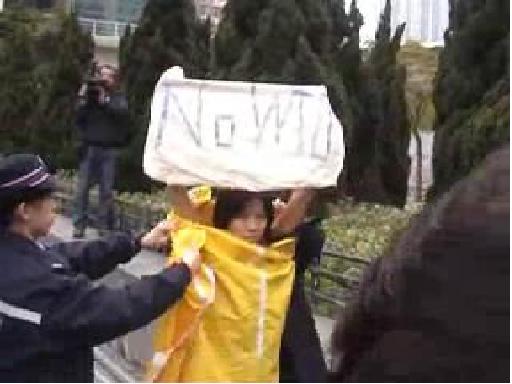 WTO – You Cannot Speak If You Wear Too Little

I am a Hong Kong girl who went to protests today in the Victoria Park. My idea today, was to launch an action. It was a peaceful one. Yet, I was besieged by more than ten policemen.

At first, I planned to walk around the park and put off my clothes gradually until only my underwear was left. ‘No’ and ‘WTO’ were written on each side of my breasts respectively. Then, my friend would help me to wrap my ‘security zones’, i.e. my breasts and my bottom, with the makeshift ‘security zone banner’ strips used by the police. (Although there were a lot of them in the streets, I dared not take the real one in the streets for fear of being arrested. So the makeshift one was just made of half a role of tissue paper)

I also prepared my slogan, ‘too many security zones’, and ‘You want me to speak, but You don’t want to listen.’ ‘You’ means the rich countries taking part in the WTO meeting. I decided to wrap my own (so called)‘security zones’ by the ‘security zone banner’, not because it was a gimmick - I was opposed to the idea that, both my body and TOO MANY parts of Wanchai, became the so-called security zones. (according to the custom or laws) My body is free and I want to express myself through my body. The security zones in Wanchai were so widespread that the protesters could hardly get one inch near to the Hong Kong Convention and Exhibition Centre. Nearly a hundred Korean peasants jumped into the sea, not because they wanted to demonstrate, but also some of them did try to swim across the Victoria Harbour to reach the Centre. It seemed that they could only shout to the air. ‘You want me to speak’ means ‘you’ seem to welcome freedom of speech. ‘But You don’t want to listen’ meant ‘you’ don’t care at all.

Anyway, when I put off my pants (and my underpants and vest was still there, ‘No’ and ‘WTO’ on my breasts were finally never shown), more than ten policemen approached me and wrapped my body with pieces of cloth. They said, ‘I don’t want to let you get cold.’ The only body parts which were not wrapped were my arms. So I put up my arms, holding the ‘No WTO’ slogan high. Then I was taken to a temporary police stop where several policewomen talked to me.

One of the policewomen said, ‘There are many ways of expressing your opinion. You are so stupid to use your most primal body parts.’ She also said I was wearing too little, and I might cause ‘fear and uneasiness among the public, upsetting the social order.’ After an hour, I was released.