In scene's remenisant of Dawn Of The Dead, Insurgent Zombies against WTO occupied the French chainstore Carrefour last Sunday, in solidarity with the struggle against the corporation's law and for social justice ! 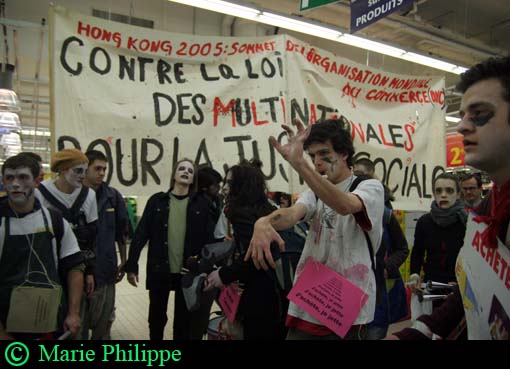 After some discussions, activists from Vamos! (Paris samba band is part of the group Vamos! ), CIRCA, groups against advertisement, Pink Panthers (queer group) and others decided to organise a zombie insurrection against WTO. All converged under the name of Federation of Insurgent Zombies Associations (FAZI).
A website was created for the FAZI, and different calls for action were wrote in a "zombie style", a stickerwas made, and also a little movie to call for the action.

http://zombie.ouvaton.org/dotclear/index.php?2005/11/25/12-appel-video-a-l-insurrection-des-zombies
pictures of the action :

Then on sunday, the undead occupied a supermarket of the "Carrefour" chain, here is the press release :

Insurgent Zombies against WTO are occupying the supermarket Carrefour : "Against the corporation's laws, For social justice !"

Near hundred Zombies and Clowns are occupying since 2:30 pm the supermarket Carrefour to denounce the WTO submit.
WTO has as a single project the infinite extension of free trade : agriculture, culture, public services... nothing must escape the corporation's appetite of profit! In North and South, we are in the same boat : embarked in an crazy race downwards, without consideration for social rights and environment.

In solidarity with men and women demonstrating in Honk-Kong, we require that WTO stops trying to control our lives. Without any democratic legitimacy, WTO must be demantled.

For this non-violent action of disobedience, Carrefour is our target because this corporation is emblematic of the logic of destruction organized by WTO : precarity and imposed part time for the workers in the North, policy of provisioning unaware of the environmental costs, no social rights and starvation wages for workers in the South...

Carrefour is the second world group of supermarkets. Present in 29 countries, this corporation directly employs 130 000 people. It has suppliers everywhere on the planet moving from continent to continent searching the lowest costs. Its sales turnover does not stop growing and its profits increased by 60 % since 2000 : they exceed 1,6 billion euros in 2004. In opposition to what it tries to make believe with an aggressive communication, this firm is not socially responsible. Recent events show it.

In the south, Carrefour has blood on its hands. April 11, 2005, the textile factory Spectrum in Savar (Bangladesh) breaks down killing 64 people and injuring several tens. In front of this catastrophe in one of its suppliers, Carrefour paid only the ridiculous sum of 15500 euros in order to deal with a part of the health care and to repurchase sewing machine! It refuses on the other hand to give allowances to the victims. We require that Carrefour give worthy allowances to the Bengalis workers victims of the criminal race to the lowest social standards. The purchasers who organize a planetary competition among workers must be considered as directly responsible for the consequences of their policy.

In the North, Carrefour throws away its employees. In November Carrefour announced the end of 1700 jobs in France during the next two years. Whereas it obtains very high profits and it devotes more than 46 million euros for the departure of its former Chief Executive Officer. This is a real provocation. We require that the directors of Carrefour cancels all these redundancies.