The connection between Taser International and the country of Chile dates to before the millennium. Shortly after assignment of their Middle Eastern sales territory to former Steman International representative, Malcolm Shermer, the South American territories were awarded. 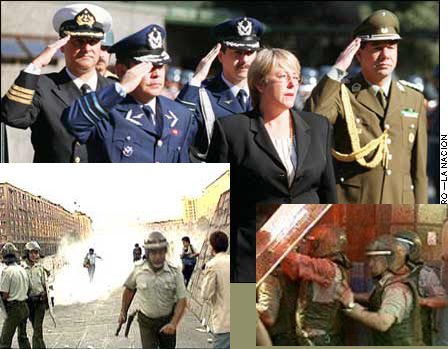 Now Dr. Michelle Bachelet, 54, a single mother with three children and the daughter of an air force general tortured to death by Augusto Pinochet's secret police is the odds-on favorite to become Chile's first woman president.
Her previous position within the government was South America's first female defense minister. Appointed to the job in 2002, she was put in charge of some of the very men who may have ordered her torture or caused her father's death.She resigned last October to run for president. She has been quoted as saying “I am a woman, Socialist, separated and agnostic”. Alberto Bachelet, Michelle's father, was a general in the Chilean air force, and he supported the socialist government of Salvador Allende and opposed the coup by General Augusto Pinochet which ended Allende's rule, and life, on 11 September 1973.

General Bachelet’s daughter, Michelle was a member of the Socialist Youth, and was appointed by Allende the previous year to head a government department. General Pinochet exacted retribution for his support of Allende. General Bachelet was arrested by army officers on the day of the coup and was sent to Santiago's Public Prison, where he was tortured daily for almost six months. He died at 50, after suffering a heart attack in his cell on 12 March 1974, one of more than 3,000 victims of Pinochet's early rule, when an estimated 30,000 citizens were arrested and tortured. No one can claim that the ultra Right Wing Death Squads of Chile from 1973 to 1990 were doing god’s work.

A child of Socialism, Dr. Bachelt has continued to bestow the communistic beliefs of a worker’s paradise. It is a shame that her enthronement as president will be on the heels of several years of unprecedented growth in the Chilean economy. Foreign investors are anticipating a down-turn and are prepped to withdraw from the country’s economy at a moment’s notice.

Wilfredo Gómez Díaz, of Las Condes, Santiago, Chile, is a man with a past. He too was a child of the Socialist experiment, but like most men in the business that he chose, was able to adapt to whomever and what ever was in-charge. Thanks to his connections within the Chilean government, Taser’s were approved for importation for law enforcement use. He continued to work on approval for civilian models. It has been rumored that he gets a percentage for every Taser shipped into South America, similar to Taser’s former employee, Karl Walter had with Glock pistols.

Mr. Diaz also handles the importation of several other technologies used by South American police, paramilitary and extra military. His business has been a steady performer over the years.

Author and lawyer Dean C. Alexander, who has been employed as an executive and in-house counsel for companies based in Chile, England, and Israel, specializes in political risk assessment. He served as executive director of the NAFTA Research Institute and a consultant to the World Bank, the Organization of American States, and the U.S. State Department and is a fellow at the International Law Institute in D.C. He is a friend of Taser’s President, Thomas Smith who wrote the forward for Mr. Alexander’s book titled Terrorism and Business: the Impact of September 11, 2001. Business Confronts Terrorism Risks and Responses Terrace Books 2004.

"Terrorism is a daily threat to our core existence and has permanently changed the way we conduct our business and live our lives. Dean Alexander has addressed these unsettling issues in a riveting and thoughtful manner enabling the business leader a heightened perspective in guiding his company's future in light of the uncertainty in which we live. Alexander's book is a must-read for corporate America as we all enter into a new, unknown, and fragile business environment where terrorism can have such an incredible effect on a company's performance."—Tom Smith, President TASER International

Mr. Alexander, 37 has been a proponent of police and anti-terrorism technologies and has made several presentations in Chile on the subject.

It is his work as Director of International Business Development for Grant Thornton International’s Santiago, Chile office, which brought him in very close proximity to Mr. Diaz. One of Grant Thornton’s associations in Chile was with its government. It was the government that Mr. Diaz was petitioning for approval for importing Tasers into Chile. The timing of these two and their involvement with the Chilean government is what raised an eyebrow.

One observer said that it was very suspicious that on September 15, 2005 TASER International, Inc. announced that it has appointed Grant Thornton LLP to serve as the Company's independent registered public accounting firm. "The structure of entry a company takes when it enters a country defines the risk," said Joseph Monti, who heads Grant Thornton's international consulting practice on the West Coast. With about $1.5 billion in worldwide billings, the company is the seventh largest integrated global accounting-consulting firm. Monti said that when a company gives up autonomy by partnering with an overseas firm promising to boost sales, it raises the chances that it will lose control of the situation.