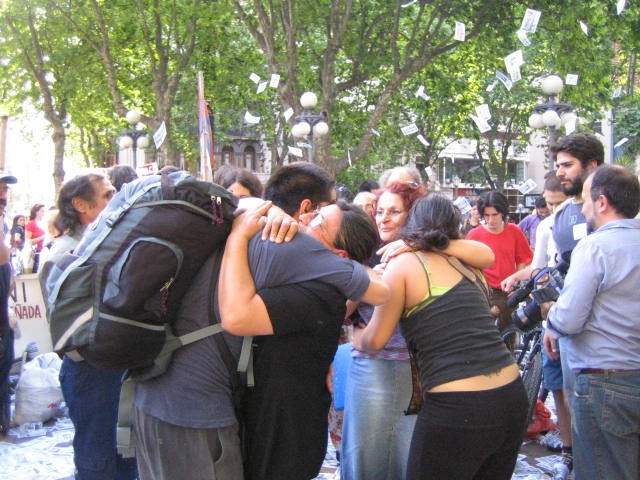 Uruguayan courts ordered the release of four prisoners detained during Anti-Bush demonstrations in Montevideo that concurred with the fourth Summit of the Americas held in Mar del Plata, Argentina. Thousands have rallied for the release of the four political prisoners in the past weeks.

Fellow activists and family members celebrated the release of Uruguay’s four political prisoners in Montevideo’s central plaza moments after the detainees’ release on Friday. Fiorella Josendez, Lilian Bogado, Claudio Piñeyro, and Ignacio Corrales were arrested while protesting against US military and economic intervention in Latin America on November 4. Police brutally cracked down on protestors when demonstrators began to break bank windows and graffiti anti-capitalist slogans in Montevideo’s financial district. The four are charged with sedition or attempt to overthrow the government, although the prosecutor has yet to present evidence against the four.

While talking with 21-year-old Fiorella Josendez and 41-year-old Lilian Bogado from Montevideo’s prison for women they spent most of the interview talking about their fellow inmates and the conditions inside the jail system. They both said that even inside prison they won’t stop fighting against injustice against imperialism and exclusion.

According to Bogado, who works as a certified nurse and labor organizer, her arrest was clearly a political arrest. “I am a social activist. If I don’t worry about my fellow inmates, as mother and human being for a better society, I wouldn’t exist. I wouldn’t be here either. I know why I went to the march because I’m against imperialism and paying the foreign debt.”

In recent weeks thousands rallied for the release of the four political prisoners. Even Latin American rocker Manu Chao dedicated a special concert to the political prisoners. Josendez thanked fellow activists for defending her. “If it wasn’t for them we would in bad shape. We know that they’re there and that gives us strength. A lot of people have come out so that the public is informed of the truth. A lot of folks took interest in our case and asked about the march.”

Many human rights groups say that the charges of sedition are reminiscent of accusations against activists during Uruguay’s military dictatorship (1973-1984). Irma Leites, a former political prisoner during the dictatorship and human rights activist, was sentenced this week for painting a graffiti for the prisoners’ release.

“What we see with the charges against the four political prisoners and with my trial for painting a graffiti is the criminization of protest. The prisoners are accused of participating in an anti-capitalist rally against Bush’s visit. My situation is that I’m on trial as a member of a human rights organization for protesting against a court decision. The situation is really difficult for the people because the government continues to pay the IMF, signs a trade agreement which hurts workers in Uruguay’s economy, votes in favor of privatizing water and defends the impunity of former military officers accused of human rights violations and criminalizes social protests.”

While the government of Tabare Vasquez strategize trade agreements in Free Trade of Area of the Americas and Mercosur, Human Rights organizations are currently organizing against a step up in police brutality.