ARTIST FLOUTS WITH NO PROTEST LAW AND WINS 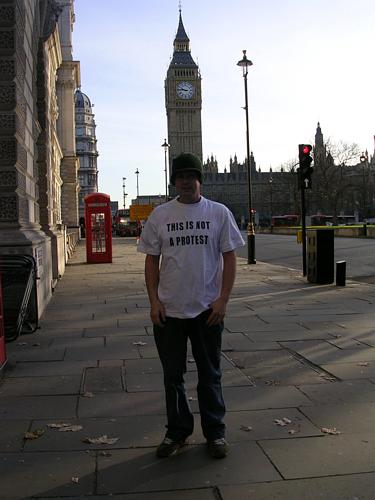 This is not a protest

ARTIST FLOUTS WITH NO PROTEST LAW AND WINS

I thought it went really well today for one I wasn’t arrested which was great because my mum would have freaked out. I must admit I was a little bit scared as the threat of arrest felt quite strong as there is a massive police presence in the Westminster / Parliament Square area. I arrived a little early and asked some tourists to take my photo under Big Ben (which I have attached) with my This Is Not A Protest, tee shirt. The, font size of the letters were quite big and printed front and back. I joked with a community policeman and he said that the tee shirt was obviously a protest.
Anyway I got into position, once I had done an interview with an activist radical chap and I started to walk backwards and I was telling people that I honestly wasn’t protesting.
I walked through Parliament Square, down Whitehall, past the Cenotaph where that lady was arrested last week. Lots of tourists where wondering what I was doing, some took photos. Then as I approached Downing Street I started to get a little bit worried as there where lots of police. But I continued to walk backwards straight passed the gates, but I could see the police inside the gates on their radios and as I got to the changing of the guards, I was stopped by two police. One a woman asked me if I was the one that they had been expecting and said that walking backwards wasn’t illegal but be careful. As for the tee shirt obviously it says that your not protesting and your not shouting, so that’s ok, but she seemed very worried that I was cold and she was right it was freezing. So I put my coat on and went home, feeling that I had made my point and won. Because, I was protesting, the thing was I don’t think they wanted to get caught up in any trap that I might have planned if they arrested me. The disappointed activist radical Rikki who was following me and filming me couldn’t believe that I wasn’t even told off, saying, “ that just goes to show their bloody inconsistency”.

No one tells me where I can or can’t protest

For more info and images

Photo rotated and resized, and link to video

This is not a protest

Please don't upload photos straight from the camera - they're far too big for use on the web! There's a free and easy-to-use tool for shrinking photos here:

But well done for your imaginative challenge to that repressive and stupid law, and thanks for reporting it.