police pointedly ignored investigating possible crimes this evening in parliament square when the 'serious organised crime and police act' was once again challenged by brian haw, maya evans and others. the event was called by tim ireland (www.bloggerheads.com) and raised money for 'medical aid for iraqi children'. 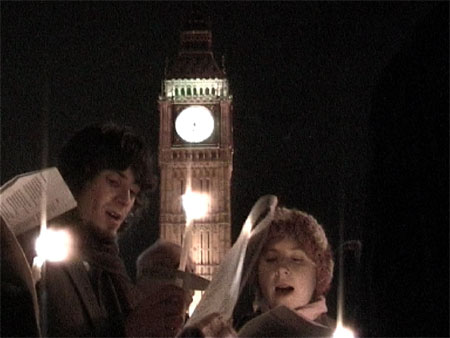 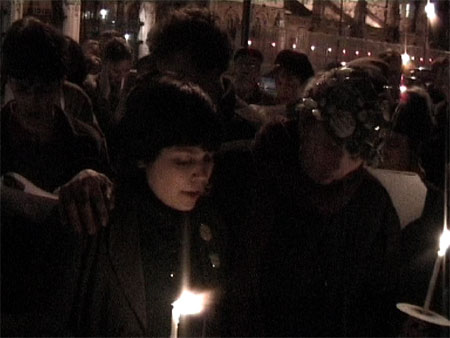 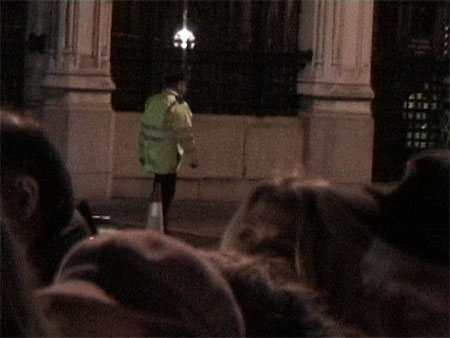 copper ignoring it all 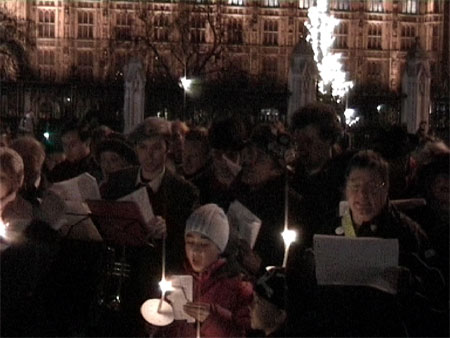 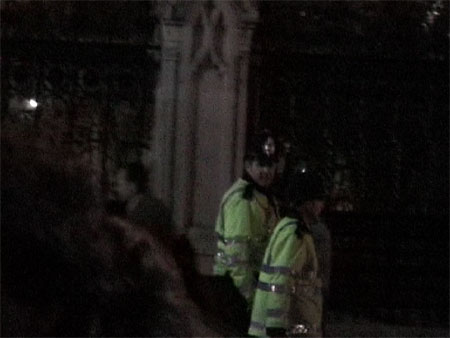 this cop can't resist a peek - hope he doesn't get into trouble! 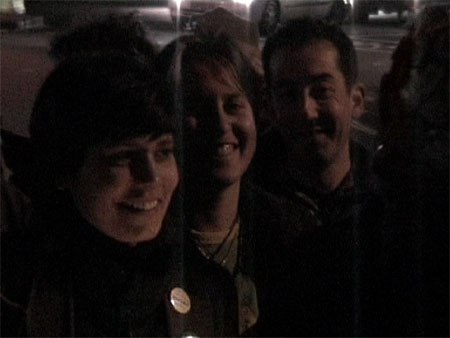 although for the most part, the carol singing was just that, at one point a megaphone was used (in total contravention of the socpa law) and brian haw made a short political speech which resulted in crowd shouting for freedom and peace, again clearly in defiance of the law banning spontaneous protest in the exclusion zone around parliament.

the police were notable by their absence. on every other occasion when any sort of group has gathered in the square, either community support officers or police have come to investigate and see if any crime was being committed under the controversial section 132 of the law.

on several of the sunday afternoon picnics (which will be continuing at one o clock every sunday in the new year) police decided that they 'believed' a demonstration was going on, and arrested participants or threatened arrest.

when cindy sheehan, the american peace activist, came to visit brian haw recently, police used the law to threaten supporters who were clearly not demonstrating, but this then triggered a demonstration and procession up to the gates of downing street where a noisy protest continued without arrests.

with recent media interest and coverage of this ridiculous law, it seems that decisions about arrests are based on the likelihood of adverse media coverage. once they realised who cindy sheehan was, they clearly backed down despite having given ultimatums and stern warnings. tonight's carol gathering would likewise have gained huge media interest had there been any arrests, and so the police were clearly ordered to ignore the event.

a small group of community support officers lurked under an archway across the road junction, and police walked in front of parliament, studiously avoiding even looking at what was going on (although one officer broke rank and had a sneaky gander). meanwhile, brian made his speech to a hundred or more supporters, a megaphone was briefly used, and fliers for sunday picnics were handed out, all in flagrant breach of the law.

but don't think for one moment that the police have decided not to enforce this terrible law. they just pick softer, less media-attractive targets. yesterday a lone protester, margaret tucker, was taken away by police for standing near parliament with a banner stating 'i am not the serious organised criminal'.

maya evans was found guilty under the law recently and given a 12 month conditional discharge and ordered to pay £100 costs. more than twenty others have been charged under the law, and the first of these cases will be heard on the 9th and the 18th of january in the new year. maya will be appealing her conviction and looks likely to go straight to the high court with this battle. as long as the police continue to act so arbitrarily in enforcement, the law looks shakier and shakier in court. the battle is on. the challenges keep coming. there is much confidence that this draconian legislation will be made unworkable and eventually overturned.

www.peopleincommon.org welcomes any ideas for imaginative challenges to this law, and they hold an open picnic every sunday afternoon in parliament square to discuss and act upon ideas to undermine this legislation.

other information can be found at: