How They Rebuilt Stonehenge 50 years ago

Pictures from The Wiltshire Archeological Society and Christopher Chippindale 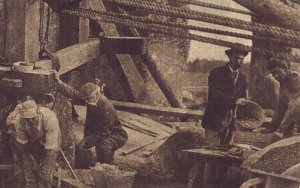 For decades the official Stonehenge guidebooks have been full of fascinating facts and figures and theories surrounding the world's greatest prehistoric monument. What the glossy brochures do not mention, however, is the systematic rebuilding of the 4,000 year old stone circle throughout the 20th Century.

This is one of the dark secrets of history archaeologists don't talk about: The day they had the builders in at Stonehenge to recreate the most famous ancient monument in Britain as they thought it ought to look.

This picture shows workers on the site in 1901 in a restoration which caused outrage at the time but which is rarely referred to in official guidebooks. For it means that Stonehenge, jewel in the crown of Britain's heritage industry, is not all it seems. Much of what the ancient site's millions of visitors see in fact dates back less than 50 years.

From 1901 to 1964, the majority of the stone circle was restored in a series of makeovers which have left it, in the words of one archaeologist, as 'a product of the 20th century heritage industry'. But the information is markedly absent from the guidebooks and info-phones used by tourists at the site. Coming in the wake of the news that the nearby Avebury stone circle was almost totally rebuilt in the 1920s, the revelation about Stonehenge has caused embarrassment among archaelogists. English Heritage, the guardian of the monument, is to rewrite the official guide, which dismisses the Henge's recent history in a few words. Dave Batchelor, English Heritage's senior archaeologist said he would personally rewrite the official guide. 'The detail was dropped in the Sixties', he admitted. 'But times have changed and we now believe this is an important piece of the Stonehenge story and must be told'.

Cambridge University archeological archivist and leading Stonehenge author Christopher Chippindale admitted: 'Not much of what we see at Stonehenge hasn't been touched in some way'. And historical research student Brian Edwards, who recently revealed that the nearby Avebury Monument had been totally rebuilt, has found rare pictures of Stonehenge being restored. He said: 'It has been as if Stonehenge had been historically cleansed'. 'For too long people have been kept in the dark over the Stonehenge restoration work. I am astonished by how few people know about it. It is wonderful the guide book is going to tell the full story in the future.'

A million visitors a year are awe-struck as they look back in time into another age and marvel at the primitive technology and muscle-power which must have been employed transporting the huge monoliths and raising them on Salisbury Plain. They gasp as they are told about this strangely spiritual site.... mankind's first computer, its standing stones and precise lintels, lining up magically and mysteriously with the heavens above and the solstice suns.

But now, as if to head off a potential great archaeological controversy - and following interest displayed by historical researcher Brian Edwards and a local newspaper, the brochures will be re-written, to include the 'forgotten years'. The years when teams of navvies sat aboard the greatest cranes in the British Empire to hoist stones upright; drag leaning trilithons into position, replace fallen lintels which once sat atop the huge sarsens. As Mr Edwards - the erstwhile enfant terrible of British archaeology following revelations that nearby Avebury was a total 20s and 30s rebuild by marmalade millionaire Alexander Keiller - says: 'What we have been looking at is a 20th Century landscape, which is reminiscent of what Stonehenge MIGHT have been like thousands of years ago. It has been created by the heritage industry and is NOT the creation of prehistoric people. What we saw at the Millennium is less than 50 years old.'

In archaeological terms the re-writing of the guidebooks is dynamite. English Heritage run Stonehenge on behalf of the nation, and an English Heritage insider revealed: 'Dark forces were at work in the 70s, when a decision was taken to drop the information about the restorations Now that is about to change.'

The Restoration and Rebuild

The first restoration of Stonehenge was launched 100 years ago this year.

And, in 1901, as the builders went to work, The Times letters column was full of bucolic missives of complaint. But the first stage of 'restoration' thundered ahead regardless and the style guru of the day, John Ruskin, released the maxim which was to outlive him.... 'Restoration is a lie,' he stormed. Nevertheless the Stonehenge makeover was to gather momentum and more work was carried out in 1919, 1920, 1958, 1959 and 1964. Christopher Chippindale, curator at the Cambridge University Museum of Archaeology and Anthropology and Anthropology, and author of Stonehenge Complete, admits: 'Nearly all the stones have been moved in some way and are standing in concrete.'

The guide book 'Stonehenge and Neighbouring Monuments' , and the audio tour of the Henge omit any comprehensive mention of the rebuilding in the 20th Century. Only on page 18 is there a slight reference...'A number of the leaning and fallen stones have been straightened and re-erected.' But even that official guide book does contain clues to the large scale restoration, which was not deemed worth a full entry.

Why does John Constable's 1835 painting of the Henge on pages 18 and 19 look so vastly different from the latter-day pristine photograph across pages 28 and 29? REASON: A lot of restoration work had taken place in between the two images being recorded. And, during long hot summers it would be possible - if one could get near to the stones - to see the turf peeling back to reveal the concrete boots into which the majority of the stones are now set. A dead give-away, but difficult to spot now as proximity to the Henge is limited.
Our pictures clearly show the rebuilding in progress. Some were discovered by Mr Chippendale and were used in a revised edition of his book. Many of those have since been lost. Others were found by Mr Edwards who unearthed guide books from the time when Stonehenge was not ashamed of its past and featured photographs and stories of the resorations.
'The news is sensational,' said Mr Edwards, a decorate student at the University of the West of England. 'Once I realised how much work had been carried out, I was amazed to discover that practically no-one outside of the henge know of its reconstruction in the last 100 years. I have always thought that if people are bothering to make a trip to Stonehenge, from home or abroad, then the least they should expect is a true story.'

This is in no way some sort of secret which has been uncovered, and is referred to in passing in a number of archaeological/heritage textbooks. Unfortunately the one I'm particularly thinking of is at the office and I'm damned if I can remember its name, but bear with me until 5th January!

yeh, it was directed by aliens and the illuminati but thats dead dead secret. 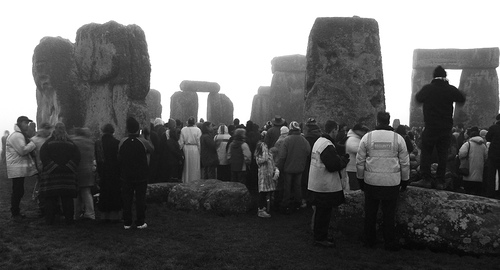 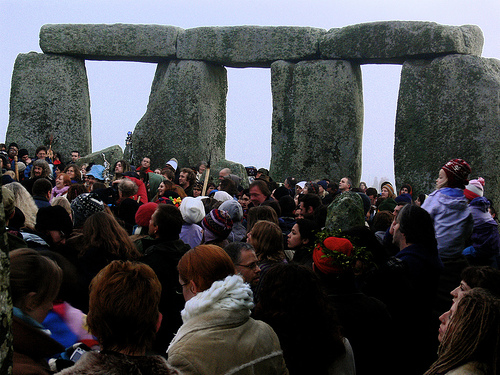 I work for a company in Somerset which did a job a few years back propping up stones at Avebury. One of the foremen showed me his photos of the stones surrounded by scaffolding with hydraulic rams to push them things into "nicer" positions, followed by, I think, concrete around the base. Its a world heritage site business opportunity.

This is really interesting. I wish there were more fact-based articles like this on Indymedia

Even the daily mail did this one

I recall that even the Daily Mail doing an expose feature on this but it is still amazing that it isnt general knowledge.

Perhaps we should be looking at the area of the earth at henge rather than the stones to explore the energy/power which people claim?

The call would be to Free the Earth rather the stones ?

I wonder if any one would be interested in a set of photographs from the 1950's rebuild of Stonehenge.
The photos were taken by my grandfather who worked on the project.

Here are the photo's