Join the battle to stop this animal torture lab being built in Oxford. 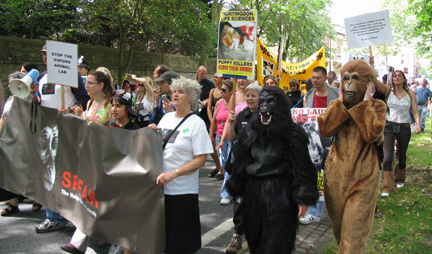 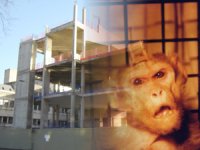 Make your voice heard in Oxford at the first national demo of 2006. Show Oxford Uni, the pharmaceutical industry and the government that we will not stand by whilst they construct this hellhole, we need to attend in our 1,000`s!!
HUGE NUMBERS = HUGE IMPACT!!

Coach transport is available from all over the UK. The West Midlands coach still has loads of seats spare, and will pick up as follows:

The coach will return from Oxford at approximately 5pm and will have a toilet on board.

If enough people contact us very soon, we may still be able to organise a second coach(or minibus) and possibly pick up at more locations. Please book and pay for your seats as soon as possible so we can assess the need for a second coach. Also, we don`t want to be handling hundreds of pounds in cash on the day, so please pay in advance!

We are asking for £10 waged and £5 unwaged per seat, but this is not set in stone, we want to get as many there as possible. Please make cheques payable to `West Midlands Animal Action` and send to the address below. Please include your name, the number of seats you require, where you intend to board the coach and your telephone number.

WMAA organised coach transport to the 3 previous SPEAK National Demos in Oxford, each time the coach was overflowing so a minibus and several cars went down aswell. Read more about these demos in our reports on our website.
SPEAK National in July 2004

It would be fantastic if this time we could take 2 coach loads down!! But we will only achieve this if everyone works hard to fill the seats. Please help us to publicise the event, distribute leaflets(available from SPEAK), display posters at work/school etc, encourage your friends and family to join you on the coach. Lets make this event massive!!!

No right-minded person can fail to be moved, by the countless images of primates and other non-human animals being horrifically abused through experimentation in the name of so-called science, which are freely and widely available. However, the animals that are subjected to this torture, need more than our tears; more than our thoughts of disgust and anger: they need our action!

This event is one of the most significant events in the AR movement in recent times. With builders resuming work on the South Parks Road site, it is imperative that this March and Rally is supported by everyone in the movement. However, it should also be supported by anyone that believes in free speech and the democratic right to protest.

This fight is not only about the research facility in South Parks Road, Oxford. It is a battle against the wider vivisection industry. If this facility is not built, it will have far-reaching ramifications for animal experimentation per se. A professor of neurosurgery at Oxford University has said, that if the research facility in Oxford is not built, it will be: “….the straw that breaks the camel’s back of British bio-medical science..”

The Freedom March & Rally offers an ideal opportunity for all of us to join forces and send a clear, unequivocal and unerring message to Oxford University: the animal rights movement is strong and will not bow to corrupt institutions; we will speak and fight for those unable to do so: the animals!