Cine Rebelde produced a multilingual DVD of the film “Latitude 36” by Jose Luis Tirado, 2004.
A documentary and fiction about the south European border 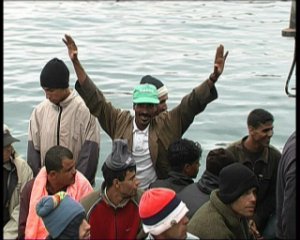 for freedom of movement

Latitude 36 is an imaginary line on a map at the same time a real location - the Straits of Gibraltar - where clandestine emigration takes place. In Latitude 36 the protagonists are the emigrants: documentation and fiction, gestures and words, dreams and wishes.
Latitude 36 is a tale, a crosspoint of micronarrations that map the south European border.
multilingual DVD 65 Min.

Original Spanish / Arabic with subtitles in English, German, and French.

to order the film write to:


We encourage groups and individuals to organize non commercial public screenings and information evenings about the situation at the borders of fortress Europe.
We are also seeking contact to infoshops, alternative bookstores, distributors that wish to resell the film to support their political work.

We would appreciate announcements, review articles in activist and independent media, newsletters, websites, fanzines.... We will provide you with a free copy of the film.

Should money be a problem for your group to order the film, contact us too:

Cine Rebelde is an independent media activist collective based in Freiburg / Germany. All incomes support our initiative. They help us to finance the production and translation of other films from social movements. They also help us to make copies available to activists and groups around the world without any resources. We are a registered non-profit organisation.