Eviction and homelessness in all forms is never pleasant. When it’s caused only in the name of ‘corporate beauty’, it is wrong. Representing his wife and five daughters, one man will again picket the London Boat Show at Excel. 'Open Invitation' to the British Marine Federation is already made. 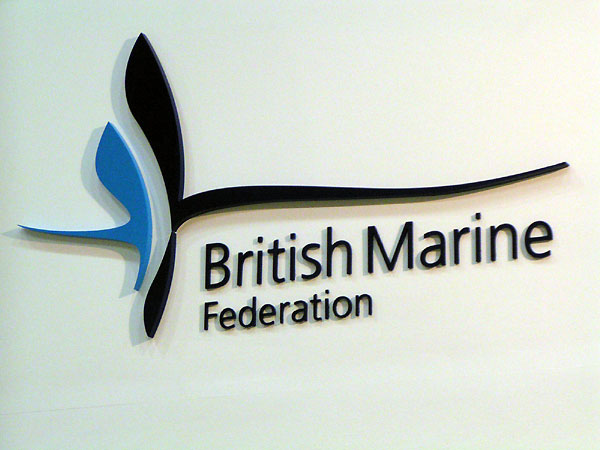 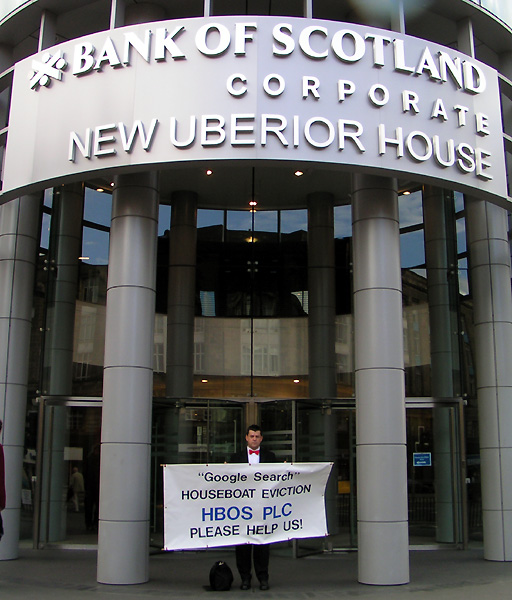 Bank of Scotland Marine Finance at the Boat Show 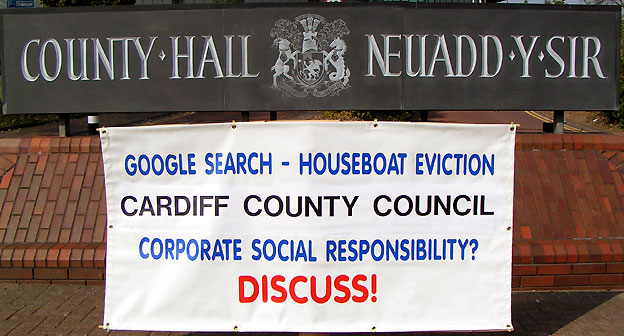 London Boat Show 2006 Do Not Arrive Too Early! 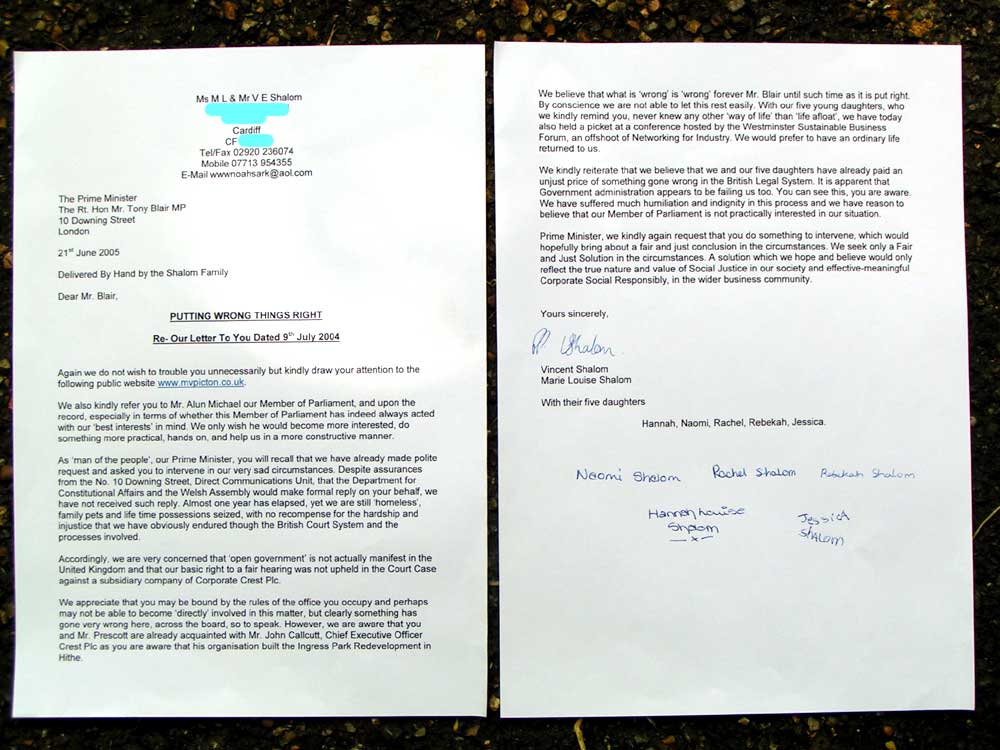 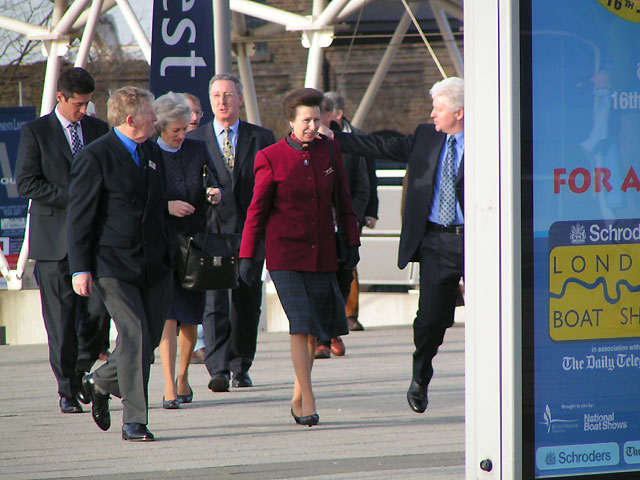 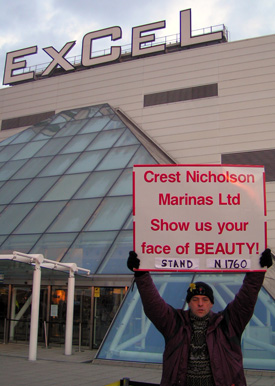 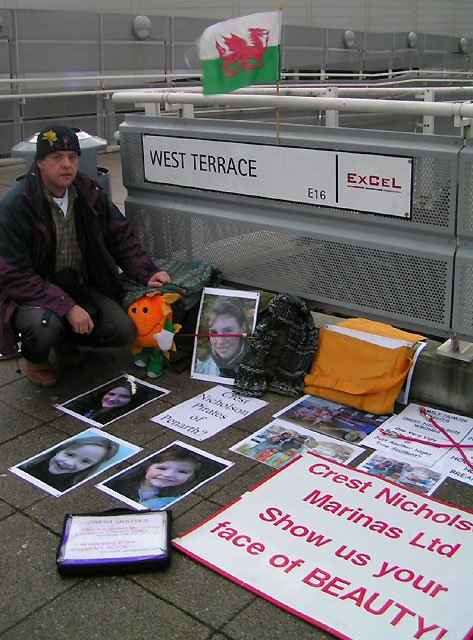 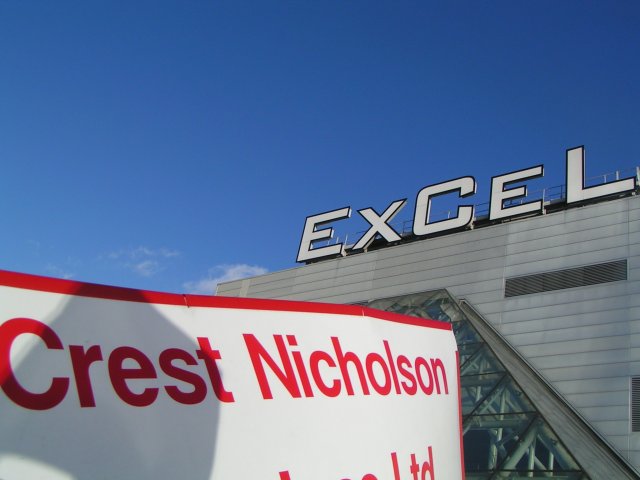 Reproduced below is that Open Invitation.

An Open Invitation and Polite Request Published to the Internet


With reference to the above, we kindly refer you to the following internet website at:

We have been given to understand that National Boat Shows Limited is a wholly owned subsidiary of The British Marine Federation (BMF).

We understand that National Boat Shows Limited is the sole organiser of the forthcoming London International Boat Show at Excel Exhibition Centre in London from 6th - 15th January 2006, and was also responsible for such previous and similar event sponsored by Schroders in January 2005.

We understand that at the time, Schroders was listed as a major shareholder with Crest Plc, a house builder and property developer based at Weybridge in Surrey, who in turn, were the holding company, and outright owners of Crest Nicholson Marinas Limited, based in Bristol.

http://www.britishmarine.co.uk/ that Quay Marinas Limited, formerly known as Crest Nicholson Marinas Limited, is a full member of your organisation. We also acknowledge further BMF listed memberships of Bristol Channel Marine Insurance Consultants LLP, “Specialists” in the field of Marine Insurance Provision and Cardiff County Council, who are owners of the Cardiff Harbour Authority (CHA). CHA is supposed to be responsible for the day to day, safe operation and control of Cardiff Bay, “Europe’s Most Exciting Waterfront Development”.

info@excel-london.co.uk, entitled, “To Protest with Dignity and Integrity at Excel”. Reproduced below is that enquiry.

To Protest with Dignity and Integrity at Excel A General Enquiry.

We understand that Excel is the venue for the Schroders London Boat Show. Schroders and listed exhibitor, Crest Nicholson Marinas, are fully aware of our Family Campaign.

It is our intention to make peaceful, public protest at Excel and as a matter of common courtesy, and respect, we believe it would be to the benefit of all parties to liaise, to accommodate, and respect each others interest, and perhaps consider the best ways in which we may work together.

We would be very grateful to hear from you without delay.

The Shalom Family Campaign for Justice
Wales, UK
You should be aware that on 21st December 2004, Mr. Nigel John, Company Secretary of National Boat Shows Limited made the following response also by Email.

Thank you for your e-mail concerning your past difficulties with Penarth Marina.
It is a standard requirement of marinas that boats are required to be insured and conform with Marina regulations. I understand that the issues surrounding this dispute have been dealt with by a competent court. As organisers of the Schroders London Boat Show, National Boat Shows do not permit any type of demonstrations by the public at it's exhibitions for Health and Safety reasons, and consequently we have to advise you that we will have no option but to refuse entry to you and your family to our show.
We will not enter into any further discussion or correspondence on this matter.


We kindly acknowledge all comments of Mr. Nigel John and specifically his comments regarding issues of health and safety, boat insurance and marina regulations. We shall return to these points in due course. However, we feel that we must inform you that it was indeed most upsetting for our Family to receive the latter advise, “We will not enter into any further discussion or correspondence on this matter”. May we kindly remind you that we have lost everything; Our perfectly safe and satisfactory Family Home of 14 years, a beautiful Way of Life and all of our Family personal property and possessions, including our Children’s 7 pet goldfish!

You should be aware that at the January 2005 Boat Show, BMF member, Crest Nicholson Marinas Limited re-presented itself as Quay Marinas, a ‘new face’ to the old marina operating company, having separated from its former owner Crest Nicholson Plc. We believe that for our Family to have received any ban without balanced investigation was quite exceptional and may reflect poorly on National Boat Shows Limited.


In November 2005, the UK Government released a joint consultation paper for England and Wales via the Office of The Deputy Prime Minister (ODPM), the Government Office which advocates “Creating Sustainable Communities”. The paper is entitled, “Security of Tenure for Residential Boats”, a copy of which can be found at

http://www.odpm.gov.uk/index.asp?id=1161848 and we note that the British Marine Federation, along with the Office of Fair Trading is listed at page 14, Annex A. “List of key organisations to be consulted”.

Essentially, the paper is an invitation to hold discussion and contribute comments regarding all the implications of the set proposals, and how such proposals if applied, may affect all “stakeholders”. This includes, but is not limited to, inviting such discussions regarding “health & safety”, “the use of unfair terms in contracts” and “harassment to leave moorings”. We believe that all stakeholders may have the opportunity to learn from our experiences.

Notwithstanding the previous ban on free-discussion received from Mr Nigel John of National Boat Shows Limited, it is precisely in view of these unique events and circumstances that we cordially invite the BMF and Directors, to learn from our appalling situation. We believe that in any event, the BMF would be keen to support Corporate Social Responsibility and Responsible Business Practice, and to this extent, we have already made similar invitation to HRH Prince Charles, President of Business In the Community, an organisation of over 700 of the top UK companies who also boast of such advocacy upon their internet website at

Please bear in mind that all submissions in response to the Government’s joint consultation paper must be made to:-

Submissions are to be received no later than 21st February 2006, and you are kindly informed that such response may also be made instantly via Email to Mr. Connell at

Finally, we must return to Mr Nigel John’s recorded comments. For the benefit of doubt and clarification for the record, we must also inform you:-


• Our Houseboat ‘M V Picton’ was insured at the time of the night-time grounding and toppling ‘accident’, undisputedly caused by Crest Nicholson Marinas Limited.

• Any “marina regulations” which we transgressed were not in any way because of something which we wilfully, and/or, deliberately, caused to be done.

• Post accident, it was identified (by virtue of a commissioned ‘Yacht Brokers & Designers Surveyors Association, professional ‘Damage Inspection Report’) that our Home had sprung a leak. Crest Nicholson Marinas Limited, endorsed by Crest Plc, wilfully prevented us from fixing such condition and thereby, knowingly prevented us from gaining insurance for our vessel.
• This created a situation in which it would appear that we were deliberately and wilfully breaking marina rules, regarding marina - minimum insurance requirements.

• Pertaining to these facts alone, Crest Nicholson Marinas Limited presented a case of a ‘breach of contract’, refused to accept our repeated attempts to pay our mooring fees and prosecuted our Family upon the ‘jumped up’ and artificially created charge of ‘Trespass’.


• However “Competent” a Court may be, we believe that sometimes a Court may not always be able to deliver competent justice. This is totally dependant on the equality, fairness and content of the case being presented before it, of both parties, namely the Claimant and the Defendant, and the way in which the case is able to be heard before the court. It is also a matter of conduct in accordance with the rules and regulations of the British Judicial System.

• Please note that a Barristers’ full legal opinion for our defence was gained and entered into Court by our appointed solicitors at the time, who believed that the case and circumstances would merit legal assistance. We kindly inform you that our formal application for legal assistance in this matter was eventually refused but only upon the grounds of financial eligibility as Ms. Shalom’s receipt of a full student loan, was considered in the calculations of the total Family income.

• At no time were we given opportunity of meeting with the Barrister or talked-through the filed defence and consequently we had little understanding of our legal defence as submitted to the Court. We appeared at Court without a Barrister. We considered this position as untenable, and accordingly we were unprepared to speak in reference to a language which we could not understand. We were not willing to risk causing prejudice to our defence as filed but we understood from our appointed solicitor, that the case was pursued and filed with, “Unfair Terms of Contract”, in mind.

• In view of what we believe is the apparent total failure of fair and just access to the protection of our Fundamental Human Rights via the British Legal System, (and all consequences that this entails) we have made personal delivery of further appeal with our five daughters to Mr. Tony Blair, Prime Minister, at No. 10 Downing Street, London. The matter has since been referred to the Department for Constitutional Affairs and the enquiry is still ongoing, but you may read the present response received from HJR Hochfelder, of the Judicial Correspondence Unit at the following:-

• BMF Member (via Cardiff County Council) Cardiff Harbour Authority has yet to explain what it considered to be its duty of care towards us, in permitting Crest Nicholson staff, free access to ram our Home whilst it was upon the waters of Cardiff Bay.


We hope you will accept our invitation and look forward to hearing from you in the immediate sense.

Marie Louise and Vincent Shalom with our daughters,

The names and addresses of BMF individuals above have been compiled directly from records held at UK Companies House December 2005. Please report any inaccuracies in the first instance to campaign contacts listed above. Thank you very much!