A Glasgow Asylum Seeker was detained this morning and taken to the Brand Street Immigration Centre.
During the No Borders Network picket of Brand Street Immigration Centre in Glasgow this morning (Wednesday 04.01.06) one of the white Securicor vans with blacked out windows was driven out and returned an hour later with a, so far unidentified, person detained in the back of it.

Because the van was only out for an hour we believe that the person detained was an asylum seeker living in Glasgow. There's no news on their whereabouts at the moment.

In response the No Borders Network is calling for a picket / vigil outside of Brand Street tomorrow from 7am. Please circulate this to anyone you think will be able to support the picket.

Brand Street Immigration Centre is very close to Cessnock Underground station - just turn left out of the station and then walk along the road to Brand Street and turn left again. 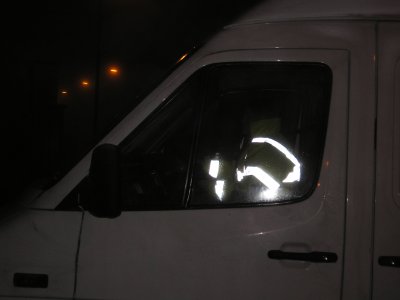 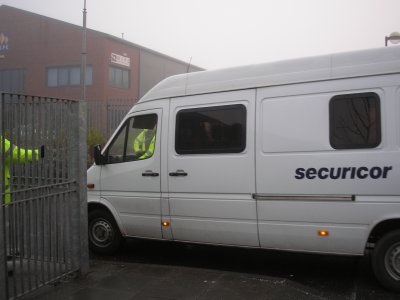 Van Returning With Someone Inside 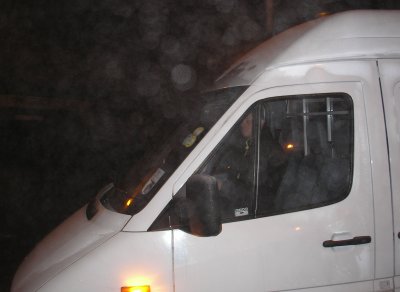 A Different Detention Van, note the Bars behind the driver

The Home Office building at Brand Street in Ibrox re-opened this morning after the New Year Holidays. Activists from No Borders Glasgow were also there, picketing from 7 till 10:30am. From the movement of the Securicor vans it's believed that one person has been picked up to be detained. No Borders are calling for people to respond by coming along to Brand Street tomorrow morning: Thursday 5th January, 7:00AM.

Staff started arriving as usual around 8AM, slipping on the pavement and shivering in the fog. At around this time two Securicor vans arrived at Brand Street. Sometime later, one of them left with two fluorescent jacketed staff in the front and no-one in the back. The sun was up by then, so this wasn't quite a dawn raid. The van returned a short time later with the same drivers and someone in the back. It went in the gate and reversed right up to the Immigration Office's back door. One person, whom nothing is currently known of, was taken inside.

As nothing is yet known of this individual or their case it is / will be hard to find out details of where they have been taken or why. However it's believed, based on previous experience and observed practice, that the only explanation for the van's journey was that it was picking up an asylum seeker and taking that person to Brand Street for "processing" prior to their being taken away to be detained, possibly prior to their removal from this country. Perhaps they feel it will be easier to get away with deporting isolated individuals rather than families with children.

Based on these facts, No Borders Glasgow has called for people to respond to the Home Office's action by protesting at the Brand Street offices tomorrow from 7AM. Furthermore, so that no disappearance goes unmarked, every time that a removal takes place they call on people to respond the same way the next morning.