Earthquake delegation. How it happened.

Sheffield has one of the highest populations of Kashmiri people in the country. Maxine Bowler explains how eight people from the town came to spend xmas in the earthquake zone. 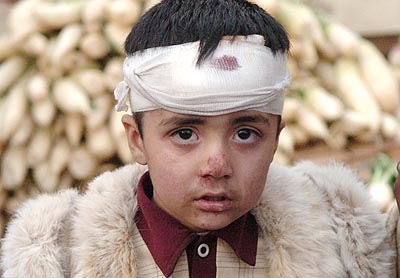 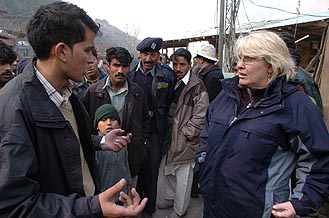 Maxine Bowler with locals in Chinari 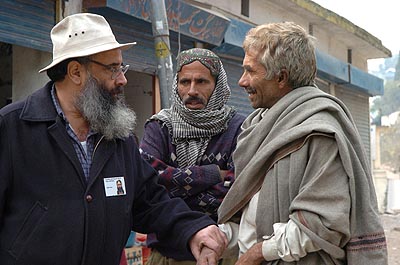 Abdul Assim with locals in Bagh

Just after the earthquake hit I invited Abdul Assim from the Kashmir education trust to come and speak. He came with Istiak who also came on the delegation to Kashmir.

We did a collection at the meeting and agreed to organise a weekly collection on the streets of Sheffield. We felt that the kashmiris having suffered years of occupation, violation of their civil liberties , were now being dealt a further blow and that it was our duty to help out.

For five weeks we collected, we then organised a series of 3 fund raising meals with the food being donated by local businessmen and the Kashmir education trust organised a sponsored walk which involved 83 participants in a 10 mile walk in the Derwent vally in Derbyshire.

We had by this stage discussed a delegation since it was clear that the profile of the disaster had already disappeared from the newspapers and decided to set up a fact finding mission to publicise events and conditions in Kashmir, we wanted to take some immediate aid but we also wanted to set up some long term reconstruction project, like as school. We were alarmed that a lot of money was being sent through the presidents fund after all it is a military government and there is a lot of distrust especially since Mussafaf had supported Blair and bush’s bogus war on terror. We argued their was plenty of helicopters to bomb innocent people in Afganistan and Iraq why were these not redirected to save thousands of people in Kashmir and to bring them Aid? It seems there is plenty of money for bombs but not to save lives.

Our views of the military have only been confirmed.