today, anti-socpa activists and others held a remembrance ceremony for those who lost their lives six months ago in the london bombings. they did not apply for police permission under the socpa law. maya evans was arrested and found guilty for doing much the same last year. today, police ignored the event. 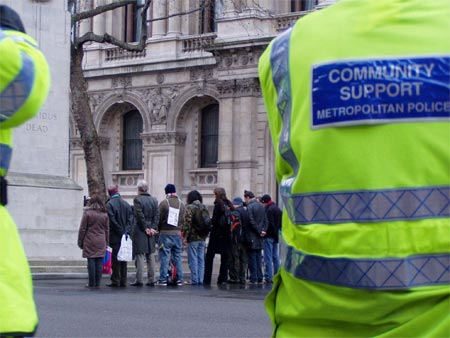 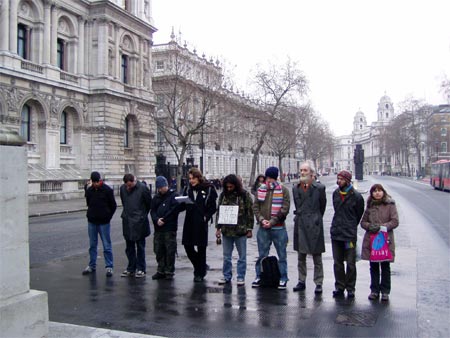 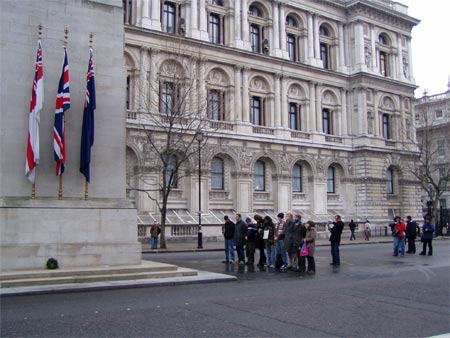 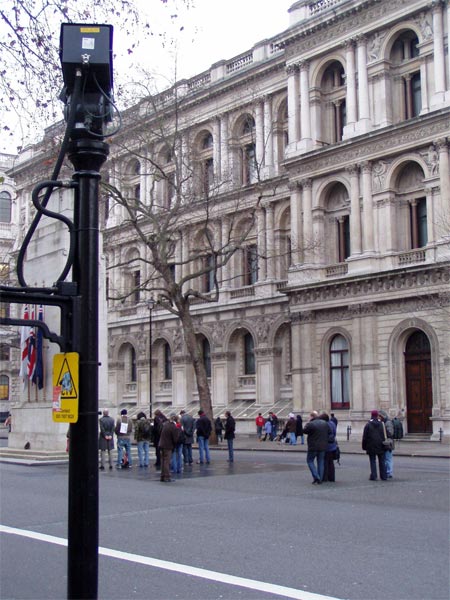 no lack of surveillance 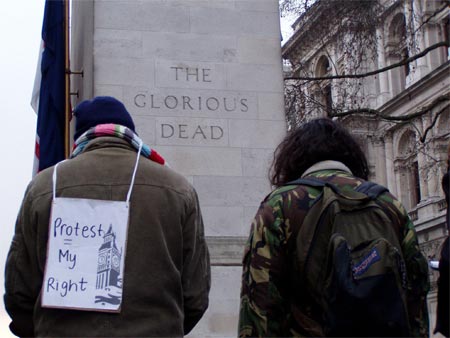 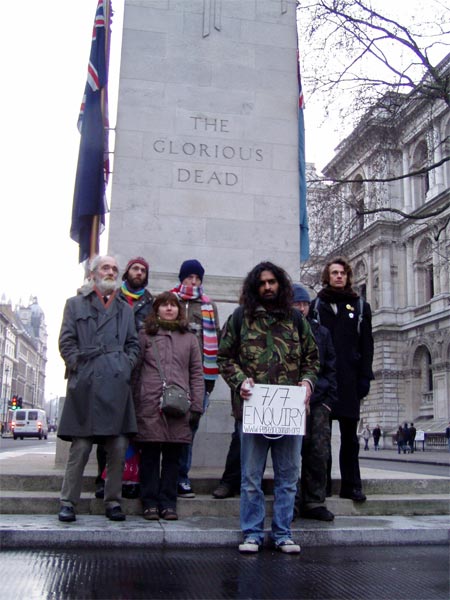 on october 25th milan rai and maya evans held a remembrance ceremony opposite downing street where they held placards and started naming the iraqi civilians and british soldiers who lost their lives in the invasion of iraq. police used the 'serious organised crime and police act, section 132' to arrest both, and maya was found guilty in december at bow street magistrate's court of participating in an unauthorised demonstration.

other socpa cases are due to go to trial on monday morning (9th jan) at bow street, with more on the 18th.

a pattern is emerging that police only arrest people when they think that they can get away with it without much media attention.

when american anti-war activist cindy sheehan came over to meet brian haw in parliament square in december, police issued a socpa warning telling them to disperse, but as the deadline passed, a crowd of up to a hundred people staged a full-scale demonstration, marching up to the gates of downing street with banners and chants, and because of the sensitive nature of any arrests in the week maya evans had appeared all over the media, they backed down and allowed the protest to continue.

just before christmas, a 'carol-singing' congregation in parliament square listened and cheered while brian haw harangued the government, and a megaphone was briefly used illegally. the crowd numbered more than a hundred, and yet the police failed to investigate, and studiously ignored the throng rather than be reported by the attendant media as arresting carol-singers.

the previous day however, barbara tucker had been arrested and charged under the act for standing alone outside parliament with a placard stating "i am not the organised criminal". there were no press around on that occasion.

today, media attended the ceremony, and so despite the fact it was virtually a rerun of maya's offence (though with a larger crowd of 9 rather than 2!), the police watched but did not act. when questioned, one of them said they were just keeping an eye on things and said "we're not all bastards".

on the 18th an activist is due in court - he was attending a picnic at parliament square in august, and was nicked for wearing an 'a4' size placard around his neck stating 'protest my right'. and yet today, one of the participants was wearing the exact same banner in full view of the police but was not even warned let alone arrested. press included spanish tv, london tonight, channel 4, news of the world, and the evening standard. could this explain the police reticence? another banner asked for a public inquiry into the london bombings.

do you see a pattern?

so a word of advice if you want to demonstrate in the exclusion zone. make sure the press is there, and it seems you'll be immune. go alone, and face the consequences.

anti-socpa activists hold a picnic in parliament square every sunday at one o'clock
more info at www.peopleincommon.org

for footage of the remembrance ceremony on the 25th october, see www.indymedia.org.uk/en/2005/10/326409.html (see comments there for the link to working version of smaller format video)

It was not a protest!

It was NOT a protest, it was memorial service for those who were murdered by terrorists. The anti-war movement insulted the memory of those terrorism victims by trying to make political capital out of their deaths by trying to blame the government and the war on Iraq. Terrorists are insane, evil, inhuman animals! They the terrorists themselves are the ONLY ones to blame for the death and misery they cause not anyone else. The terrorists who carried out the July 7th bombings were also born and raised here in Britain. They were not from Iraq, so how on earth could the Iraq war be the cause?

No matter what you think about the July bombings, the excessive police numbers dragged to the G8 and the decreased terror alert contributed towards leaving London open to attack. Not forgetting the subsequent murder of JCdM innocent victim of the aftermath, I'd say the government bears more responsibility than it's prepared to take.

it was not a protest

erm - can 'concerned' please explain to us in what way maya evans' remembrance ceremony was different, then read the points i am making in my article about the use of the socpa law, then if he/she so chooses make some relevant point about that, and perhaps apologise for trying to make political gain out of hijacking this story to make an irrelevant point.

It is not about 'protests'. The new law bans 'demonstrations' and a demonstration is anything the police want to call a demonstration, whether it is or not. If the cops don't like the look of you that is it! I and others have been threatened with arrest merely for congregating peacefully within the zone without banners or placards. We are becoming more and more like a Police State. The Government is using the excuse of terrorism to expand its power over the people, enthusiastically assisted by its Police Force.

It should be noted that we still do not know who was responsible for the day's terrible attacks. The evidence does not support the Conspiracy Theory fed to us by the people who said "Iraq has WMD!!!", the people who said an investigation would be a "ludicrous distraction", who used the day to sieze for themselves powers the courts had denied them for four years.

Check Out The Tube's "Security Company", with links to 911

Democracy is full of hypocrisy

This is a prime example of the double standards entertained by those who think their thoughts are the absolute truth for everyone - politicians. To tell you the truth, I am fed up with politicians. A consensus of opinion is what established stable democracies round the world, post WW2. Modern governments are now secretly insular and play by whim, rather than cooperation. Now we are in "terrorist threat" times, despite all the fallacies our elected leaders spin in order to deceive us (the electorate) into believing our way is the right way, as opposed to the fictitious monsters they dream up to pump out through the major media outlets. It all smacks of a gigantic Satanic conspiracy, where our world leaders do anything to stop world peace arriving. For some of us more enlightened non-voting populace, we are already there.