We will be discussing practical support for the Rossport campaign at the next Dissent meeting in Notts. Coach trip anyone? 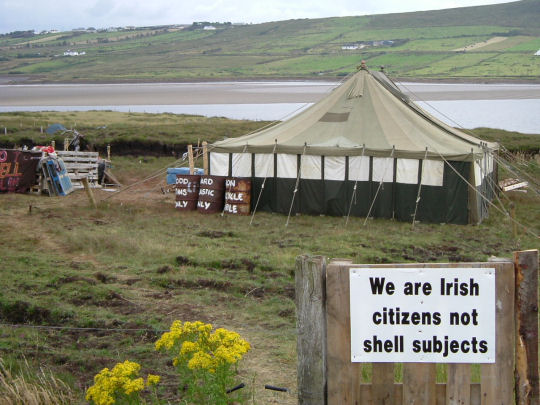 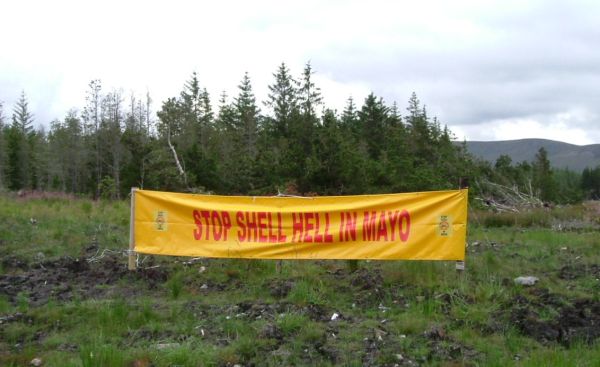 To Recap: The Irish Government sold the rights to a massive gas field off the west coast of Ireland to Shell for a pittance. Shell are trying to build a massive high pressure pipeline to bring the gas ashore and this pipeline will pass just a few metres in front of the homes of residents of the small village of Rossport in County Mayo. Earlier in the year 5 small farmers were imprisoned for not permitting Shell access to their land to install the highest pressure gas pipeline ever constructed.

The pipeline will end at a huge gas refinery Shell are starting to build on 400 acres of previously publicly owned forest.

The 2Rossport 5” were released at the end of September after 4 months in jail but were unrepentant, they will still refuse Shell access…..

"We now call on our supporters to intensify the campaign for the safety of our community and families. The campaign has now begun in earnest." Rossport 5, Sept 30th

Up to now the blockades of the pipeline site and the refinery site have been very successful, to the point where the blockaders, mainly made up of locals, have been able to determine what is and is not allowed into the sites. However, as the weather improves this spring Shell will be more determined to push ahead with the pipeline and refinery construction and campaigners are calling for more support.

At the next Notts Dissent meeting on 16th Jan we will discuss how we can support the people of Rossport in this fight against corrupt government, multinational corporations and environmental and climate destruction. Items to discuss include:-

- Local actions in support of the international days of action on 17th and 18th Feb
- Organising transport for a group to go over to support the eco camp and pipeline blockade
- Raising funds/equipment for the eco-camp wish-list.
-
Nottingham Dissent meeting: 7pm Monday 16th Jan at the Sumac Centre

For more info on the campaign and a review of the solidarity camp in Rossport see: -

Sorry, I didn't provide a direct link for info, this is better: -