today, bow street magistrates court started hearing evidence against four of the five people arrested in parliament square on the day the new socpa legislation came into force on the 1st august last year. but it is now clear that seven people were arrested that day, but two mysteriously avoided charges. WHY? 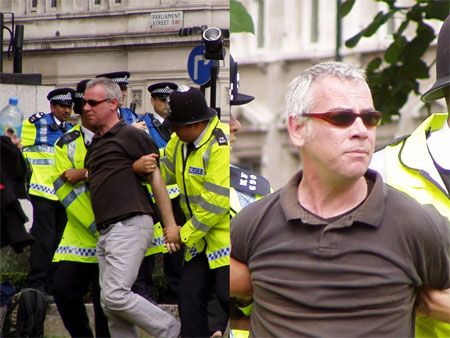 why was this man immune to arrest?

on that lovely warm day in the summer last year, police waded into the crowd of some 100 demonstrators, and snatched a handful of the participants while leaving most untouched. reports on the day spoke of five arrested, and this was confirmed by the police, and by mainstream media. police were overheard stating they had a quota of six to grab.

you can read an indymedia report of the afternoon at

today in court, four of those arrestees appeared. the fifth, ann clancy, is unfortunately ill and police have agreed not to proceed with the case.

during the course of today, in talking to those arrested, other witnesses, and watching police video footage of the afternoon, a mystery has emerged. two more people were arrested and escorted to the waiting vans, but both these people have since completely disappeared from the record. after being driven off in the vans, they were clearly released without charge. why was this? who were these people? what singled them out for special leniency? what is their connection, if any, to the 'stop the war coalition' and or the police/security services?

one of them was a sudanese woman, who spoke on the megaphone at times, and who was otherwise wearing a black gag across her mouth. she also wore a black and white headdress. i have no picture of her, but she was always near the megaphone and was clearly visible on police videos of the action. the other was the man pictured above, being arrested. who is he? does he have any affiliations that you know of? i think we should know!

the court case of the four continues at bow street tomorrow, and may possibly run into a third day. i will report on that when it is finished, but in the meantime can anyone help identify these people? or perhaps you ARE one of these people and can come forward with your record of the events of the day. your help may affect the outcome of this or future socpa trials and appeals.