A review of news, opinion, and photography recorded, from the Indymedia Newswire. With times and freqs for tuning in anywhere you can at your leisure. Free to rebroadcast. The world & recorded for the community archive! 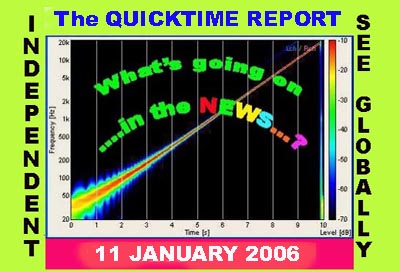 Download the latest newsletter from the Indigenous Social Justice Association...

Please note the "last word" on page 41. ISJA's survival depends on this.

Djadi-Dugarang, Vol 6 Issue 11/12
"Not fit for modern Australian Society - part 2
Down the Rabbit Hole with COAG"
Download the latest newsletter from the Indigenous Social Justice Association!
Please note the "last word" on page 41.
ISJA's survival depends on this.

Dr. Gideon Polya, a senior biological scientist in Melbourne, has lodged a formal complaint with the International Criminal Court over Coalition war crimes in occupied Iraq and Afghanistan. Dr Polya has been researching "excess mortality" for all countries in the world for the period since 1950.

Activate the New Year with 3CR's Seeds of Dissent Calendar!

Celebrate radical Australia and get inspired to make 2006 an active and progressive year with 855AM 3CR Community Radio's Seeds Of Dissent Calendar.

Jane Howarth, a long time researcher and commentator on the region and in particular on Radio 3CR community radio has just completed a series of background articles on the Iraq Endless War.

Shot across the bow … the damage to Greenpeace's Arctic Sunrise ship, which has been trying to disrupt whaling by Japan in Antarctic waters, inset. Photo: Greenpeace

"HE'S coming directly at us from 90 degrees. We're going to get T-boned."

Greenpeace's expedition leader, Shane Rattenbury, was describing the moment yesterday when an 8000-tonne Japanese factory ship collided with the 949-tonne Arctic Sunrise, leaving it with a 1.5-metre dent in its bow. Both sides are blaming each other for the incident.

After refueling inside the Antarctic Treaty area, the Japanese whaling fleet has recommenced the whale hunt and slaughter after 11 days. In that time the fleet has fled over 3,000 nautical miles from the far east of the whaling area to the far west. Greenpeace activists again disrupted the whale hunt on 5 January, enabling many whales to escape. Andrew, from the Greenpeace ship, Esperanza, tells the story of one hunt and how the harpoonist needed only one good shot to Slaughter an Exhausted Whale Calf.

AUTONARCON - 29th JANUARY 2006 at CITY FARM - What is Autonarcon? For lack of a decent immediate short name for a proposed Perth Anarchist and Autonomous Activist Gathering - 'Autonarcon' could be described as an upcoming gathering of creative, dynamic people who identify as, although not limiting themselves to, anarchists, dissidents, activists or maybe describe their politics as autonomous, independent, radical, or seek a life free of hierarchical control...
ALL WELCOME - Come get involved...

CCTV for illegal and degrading war!

I would think that people would agree with the proposition that your civil liberty not to have your bag searched is outweighed by my right not to be blown up.

The same goes for you, your pockets, house, car, phone and just about anything you own!

Rollo & Bliss, bring my family back.

St Germain and How do you plead?

I want to be with you, without a doubt!

I want to be with you, want to tell you that!

It's wrong but I want it to be right!

What is Justice Action