Canadian Greenpeace whaling activist, Texas Joe Constantine, was dragged overboard into the freezing Antarctic waters after the whaling harpoon was fired over his inflatable and the harpoon rope became entangled in the craft. Constantine spent a few minutes in the water in his survival suit, before his compatriots could manouver their craft to pick him up. The harpoon killed the whale almost instantly after a chase lasting an hour. 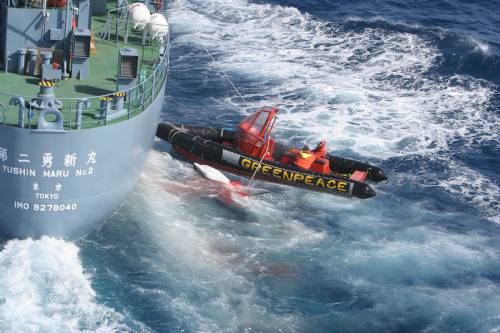 The incident happened at 6pm on Saturday night while three activists in a Greenpeace inflatable were defending a minke whale in the sights of the harpoonist on the Japanese whaling catcher ship, Yushin Maru No2. The harpoon was shot perilously close to the heads of the activists, with the grenade tipped harpoon exploding and killing the whale almost instantly. The harpoon rope came down upon the inflatable getting stuck in the steering controls. As the harpoon line was reeled in with the inflatable trapped between the catcher ship and the dead whale, the rope became taught and dragged Constantine into the icy blood stained ocean clinging to the harpoon line.

After letting go of the harpoon line, Considine floated in the blood soaked ocean near the whale while the inflatable came round. He was dragged onboard, thankful for his survival suit which provides heat insulation and buoyancy.

Many whales hit by the harpoon can take several minutes to die, and Greenpeace has filmed whales that have taken more than half an hour to die after being harpooned.

Later Texas Joe Constantine described the incident: "We were out defending the whales. We have been out there for about an hour. I was driving our boat and we were in a good position and the whaler fired its harpoon," said Mr Constantine. "All of a sudden the harpoon line came down on us trapping us between the whale and the catcher. The line came tight at that point and threw me from the boat into the water. It was a few minutes before our boat was able to come over and pick me up out of the water."

Shane Rattenbury from the Arctic Sunrise said: "They had been running the gauntlet between the whale and the harpoon, using themselves as a shield, when suddenly the harpoon was fired over the top of the boat. It struck the whale and fortunately it died immediately. We have seen some kills that go on for a long time, with the whale thrashing about, in which case the whole boat would have capsized. The harpoon cord lay across the inflatable vessel." There was no movement for a few seconds by the whalers or the activists. "I think we were all just stunned by how near a miss it was." he said.

Shielding the whales from inflatables has proven a mixed success. Many whales escape the harpoon, but eventually the catcher ship chases a whale, runs it into exhaustion, and kills it despite the efforts of the activists. Shane Rattenbury said the tactics had been successful to a large extent in hindering the numbers of whales killed "It's not the perfect tactic, but nothing was ever going to be. We're doing our best down here but this hunt is not going to be entirely stopped by us being on the water. We need governments to bring pressure to bear on Japan and companies that run the whaling fleet to decide not to do it any more."

"Before this happened, we had prevented them from killing this whale for about an hour," Mr Rattenbury said. "Tensions have been rising the last few weeks and the fleet is frustrated at not getting clear shots at their targets. Yesterday took it to a new level. We are very concerned about that."

Institute of Cetacean Research (ICR) Director General Dr. Hiroshi Hatanaka accused Greenpeace of "dangerous risks to maintain media interest." He said "Our harpooner had a clear shot and took it. The strike was perfect and the whale was
killed instantly. The fact that the rope fell onto their inflatable and one of the activists fell into the water is entirely their fault. We are also concerned that they tried to cut the line because it makes it more dangerous for them."

Greenpeace Australia CEO, Steve Shallhorn, said the incident highlighted the need for more pressure on the Japanese government to recall their whaling fleet: “It's way past time for John Howard and the world's anti-whaling nations to demand that Japan gets its whaling fleet out of the Southern Ocean whale sanctuary. Greenpeace will keep up our intervention, but it will take strong international pressure to make Japan honour the International Whaling Commission ban on whaling in this sanctuary.”

"I'm asking a serious question here of the whalers. "Would you kill a person to kill a whale?" Because that is what it is down to here in the Southern Ocean Whale Sanctuary. The reports and video from the Arctic Sunrise boat crew makes that abundantly clear. Meanwhile, out in the Billy G. we had our own close firing - not as menacing as the behaviour the Arctic Sunrise folks saw, but still irresponsibly close.

"I've never seen anything like this. It's my third trip to down here, and I can only attribute the whalers' behaviour to two things - the fact that they've more than doubled the number of whales they want to kill, and that we're being more effective then ever before at non-violently protecting these whales from the harpoon.

"It's worth pointing out that as Greenpeace activists we've chosen to use peaceful tactics - to not put the whalers' safety at risk, no matter what. We also each choose to put ourselves in harms way. But the whaler with the gun also has to make a choice about whether to pull that trigger. For the safety of my crewmates - I hope he doesn't make the wrong one.

The incident with Constantine being dragged into the freezing water resulted in activists reassessing their tactics, taking the Sunday morning "off as a cooling down period.", according to Andrew from the Esperanza. This allowed Greenpeace to do repair work on their inflatables. In the afternoon "the Yushin already had a whale alongside, but it was searching for a second. Nathan started up the pump [on the Billy G], creating an artificial shower to make whale spotting difficult. It was a bright sunny day, and the whalers weren't really appropriately dressed for the occasion. As the Billy G. came closer, the crow's nest and flying bridge emptied. Soon all the whalers had gone inside." said Andrew on his blog.

The incident happened off the Mawson coast in the Australian Antarctic Territory, 2000 nautical miles south-west of Perth. The Fisheries Agency of Japan claims it is conducting a scientific research programme. Greenpeace and Sea Shepherd say the hunt is nothing more than commercial whaling in disguise. After the whales have been measured and weighed by the scientists, the whales are cut up and boxed for the market.

http://weblog.greenpeace.org/oceandefenders/archive/2006/01/would_you_kill.html
Would you kill, to kill a whale - by Andrew, onboard the Esperanza, Ocean Defenders Blog, 14 January 2006

http://tvyil.greenpeaceweb.org/default.asp?loadfilm=59&loadcat=10
Greenpeace Video: Between the whale and the harpoon - Short clip from activist Texas describing incident in which a harpoon line and his boat got into a tangle.