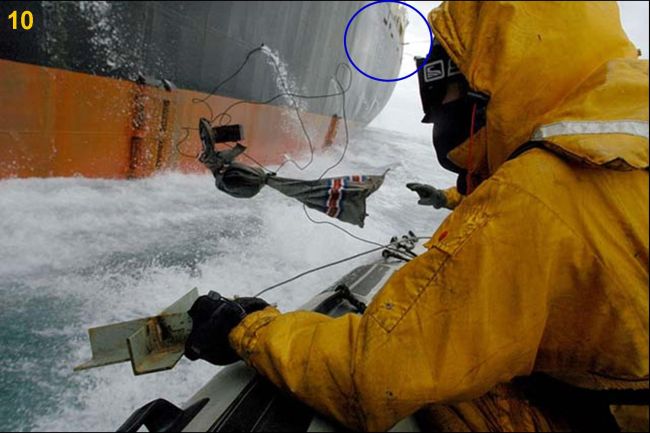 Nisshin Maru: port or starboard side? 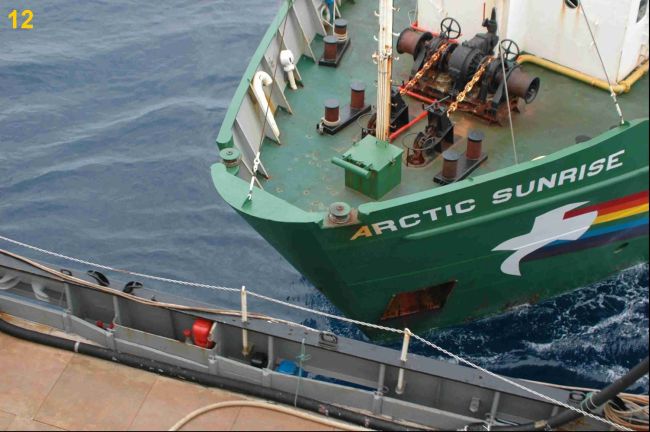 The alleged ramming by Greenpeace of the Nisshin Maru

The Institute then links this insinuation to their claim that the Greenpeace ship ‘Arctic Sunrise’ rammed the whale processing ship, ‘Nisshin Maru’. According to the Australian newspaper ‘The Age’, the ICR has retained a New Zealand PR company to handle it’s response to the anti-whaling protests.

Greenpeace and Sea Shepherd are independent organizations operating in the same area. The PR release first tries to imply co-operation by showing images of the two groups near the Japanese ships. Then it shows the Sea Shepherd attempts to foul their ships propeller. The PR says that Greenpeace rammed the ‘Nisshin Maru’, ‘immediately after these sabotage attempts’ by Sea Shepherd fail. The implication is that Sea Shepherd failed and Greenpeace tried to finish off the job. However, this PR release is a pastiche of ‘spin’ and distortion.

The Sea Shepherd tactic is to release the fouling lines in a manner described by one of the crew members doing the action.

‘Two of our three zodiacs were equipped with devices we had made to foul their propeller; basically two buoys connected with steel cable and rope that we would place in front of their ship in hopes that the Maru would run it over, it would pass underneath their hull and into their propeller at the stern of their ship causing their ship to slow down dramatically or be stopped completely. The Maru was running at full speed away from the Farley. Both zodiacs deployed their devices repeatedly. None seemed to work against the goliath Nisshin Maru ship.’ (Joel Capolongo, Jan 10,

The ICR media release shows several images of the attempts, all of which show the action happening near the bow of the ‘Nisshin Maru’ (e.g. image 8). At the end of the press release the action is reversed and the Japanese show an image of, according to them, Sea Shepherd now releasing a fouling line near the stern. This image apparently shows the undamaged ‘Nisshin Maru’ (image 10). A close look shows that this image has been made at the bow of the ‘Nisshin Maru’. Image ten is deliberately misleading and designed to spin the story to lead in to the final image, where Greenpeace ‘ram’ the Japanese ship after their mates Sea Shepherd fail to stop the ‘Nisshin Maru’.

The Japanese PR claim this image shows that the ‘right starboard bulwark HAS NOT BEEN RAMMED YET’ [their emphasis], however, this image is clearly of the port side of the ship, not the starboard. This is deliberate, manipulative, misinformation designed to feed the idea that the two groups work together. It leads to the image (image 12) that shows the ‘Arctic Sunrise’ about to supposedly ram the ‘Nisshin Maru’ after Sea Shepherd has failed in their ‘sabotage’ attempt.

Again this image is misinformation and clearly shows that the ‘Arctic Sunrise’ was moving away from the Japanese ship. This can be seen from the wash about the bow of the ‘Arctic Sunrise’. A ship moving forward creates a bow-wave; a ship in reverse creates an upwelling around the bow as water surges up from below. This is the wash seen in the image, which seen in the shape of the white wash that shows upwelling patterns. The ‘Arctic Sunrise’ appears to be moving back and to the left (in the direction of the number ‘12’ in the image), not forward as the Japanese claim.

The PR release is designed to malign both Greenpeace and Sea Shepherd. Some New Zealand PR firms have a history of running anti-environmental PR for companies and seems that a New Zealand firm is now doing its best to smear anti-whaling protestors on behalf of the Japanese whaling industry.