An applicant of political asylum, political prisoner in France!

An applicant of political asylum, Akash Mirza, profits from a similar French treatment that of his country, Pakistan 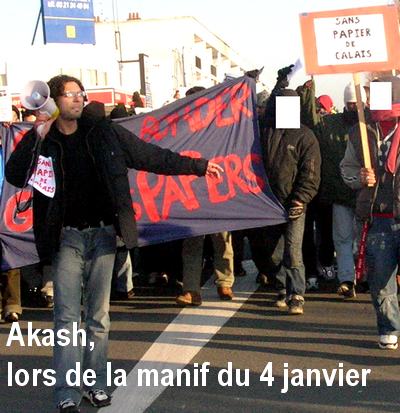 Akash is imprisoned without reason in the center of retention of Coquelles, close to Calais.

In October 2005, the young man had been stopped in prefecture of Arras, whereas it deposited his file of request for asile.

Placed in center of retention for its expulsion and abused already by many faults of legal procedures, it had been released, at the end of November, without residence permit but in situation of applicant of asile.

At the time, it had simply translated the remarks of Sarkozy publicly, for the whole of the refugees of Calais. Its weapon a loud-hailer of small taille.

After several police custody, where it was seen proposed a passage without control in England, then threats to be stopped as frontier runner and terrorist, it was one of the organizers of the autonomous demonstration of the refugees of Calais, January 4, 2006, direction the small sous-prefecture, in spite of the threats of bludgeoning of the sub-prefect, M.Espagnol.

The prediction of a new demonstration next Wednesday, January 11, obliged the police force to seek to stop the organizers, apart from the presence of witnesses. The police officers spent one week before finding the occasion. Akash and Lukiy were challenged at a point of appointment known by ten policemen in plain clothes.

The prefect of Pas-de-Calais reactivated his order of expulsion against Akash, without ventilating of course this order. The judge of court of Coquelles was charged to speak in the name of the prefet.

The lies of the prefect are of two types: 1.Akash would be illegal. 2.Akash would have deposited its request for asylum in Austria, the Eurodac terminal would have found its trace.

Let us restore the true:

1.Akash is in possession of the document of the commission of the recourse of the refugees which accepted its recours.

2.the Eurodac terminal keeps in memory the fingerprints of the applicants of asylum... and the people who cross the borders irregularly, which was the case of Akash.

The return of Sarkozy in Calais, January 27, according to information, leads the prefect of Pas-de-Calais to don't respect the humans right.

(the pictures and vidéos of the detention of Akash, were removed by police officers of Calais at the time of my setting in cell, during 8 hours, Wednesday January 11, without reason...)