The WSF in Bamako is about to start, but already today people got wild about world politics. It was shocking, funny and leaves at lot of space for improvement. 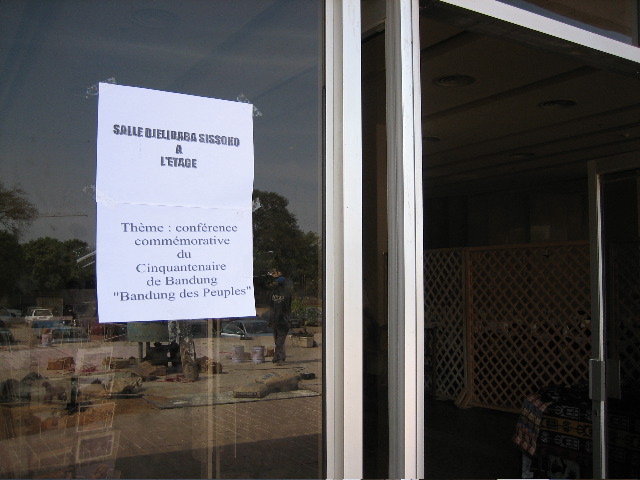 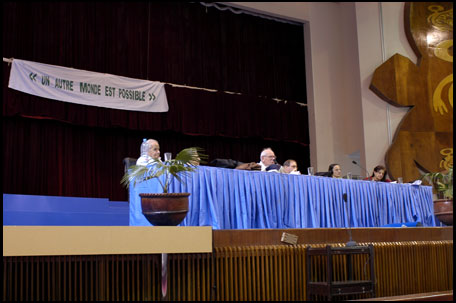 another world - not really 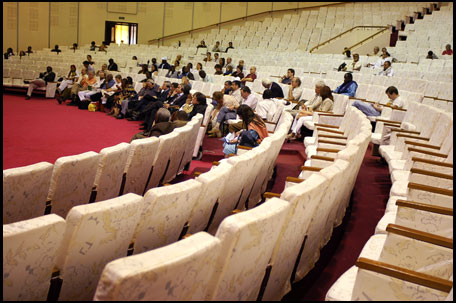 attendance was rare at the Panel

The last day before the offical start of the WSF in Bamako brought the first major political discussions. The conference „bandung du peuple“, called by a network of Third World activists, took place in Bamakos conference centre near the Niger river. In Bandung in Indonesia, in 1955, Third World leaders came together for a united conference against Western and Soviet Union colonialism.

The idea of the conference „Bandung du peuple“ was to hold a debate about imperialism from a grassroots perspective in Bamako before the WSF starts. The other idea was to prepare for a stronger political outcome of the WSF by moving beyond the idea to "just" create a space for broad discussions.

The outcome was poor. The one good thing about the conference was to reminds us where we shouldn't go.

The tone of the conference was openly anti-american. Although a critique of the forgein policy of the United States of America is not only everbodys right but also more than understandable, the voices to be heard in the conference argued partly in a very unreasonable way and ignored that in today’s world of interconnection and global gouvernance it simply doesn't work to single out one country to be responsible for all the evils in the world. In Bandung in 1955 the states of the Third World were not even that one-sided in their critique and condemned the Soviet Unions, US and french imperialism equally. Here in Bamako it was all one-sided. Members of one panel discussion went so far to call for the unconditional support of the Iraqi resistance and quite a few people supported this. And no one objected. So I do it now:

There might be reasonable forces in Irak who think it is important to put pressure on the occuparion forces to leave, but: this doesn’t justify killing their own people, trying to inflict ethnic and religious civil-war, and not even - from my perspective – to kill occupations forces.

If people argue for unconditional support for the Iraki resistance, they might as well support Irans right to nuclear weapons. Why? Because Iran is obviously a much nicer country then the USA...and guess what, that is exactly what another member of the panel I attended did. Calling for the support of the Iran against imperialist oppression!

Fact is: the Iran is imperialist in the south of Irak, in Libanon and Palestine.

France, who wasn’t mentioned at all in the whole talk, is quite-imperalist in West Africa. Their are a few activist here who very much like to tell stories of french influence in West-Africa.

Unfortunealty these stories are told in french. To you see the irony?
Now what does this tell us about imperialism today?

Before we are not talking about the problems of West-Africa in english as well, as long as we do not take a broader approach to world politics, across colonial and neo-clolonial borders, the only common ground for the global justice movement will be the condemnation of US politics in the same way it has been done for the last 50 years.
Not supprisingly, most of the panel participants were about in their 70ies.

Not supprisingly it weren't that many there in the first place. Not supprisingly the debates had no practical outcome apart from the great idea to create a map of all the military-bases of US forces in the world.

We need to draw new maps of the world. If we rely on the old ones, we’ll stay in the old patterns.

It’s important to remember that we always have two choices when we move to a different place: We can take this place for what we know and apply our knowledge, therefor actively trying to impose our way of thinking. Or we can open our eyes and ears and learn something new. One way is called imperialism, the other is called diaspora.

To overcome imperialism, we need to create a diasporic consciousness, everything else is just another form of imperialism, even if it is called anti-imperialist (which really only means its weaker)
The "Bandung du peuple" conference today was exactly this, a bunch of people who travel around the world to tell the same old story about how bad the US are. That idea might constitute a safe space for them, safe from having to think further. But it really just expresses their weakness. But really, weren't we here to express out ability to create another world?