Before going any further it should (in the interests of accurate journalism) be made clear that there is no evidence to suggest that Mark Collett (Nick Griffins co-defendant) is anything but heterosexual. The fact that he spent much of his famous BBC documentary stripped to the waste doing weights and generally posing for the camera in a homoerotic way proves nothing. It must also be added that Collet being spotted by an anti-fascists mincing around ‘like Quentin Crisp’ is equally inconclusive.

Anyway now that is cleared up, Monday saw the beginning of the trial for ‘incitement to racial hatred’ of BNP leader Nick Griffin and his (not Gay) sidekick Mark Collet. For many it was like Groundhog Day in Leeds with an identical number of Nazis and Antifascists as last time. The Police operation was also breathtakingly similar to the last one with even the same FIT clowns from the MET being sent up to waste everybodys taxes. The weather was also the same as were the chants, placards, faces and politics. If you read the review of the previous demo:

http://www.indymedia.org.uk/en/2005/11/327189.html
Then you may as well stop here, as there are no new revelations other than the confirmation that Mark Collett does it with girls and definitely not boys or sheep. 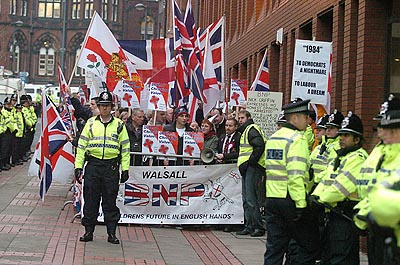 The BNP, outnumbered by their Police protectors. 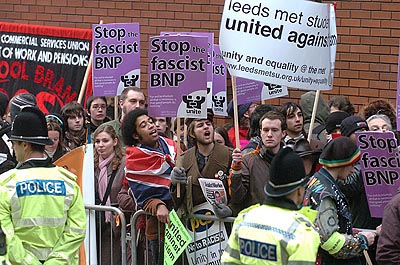 The much bigger UAF/Trade Union demo. 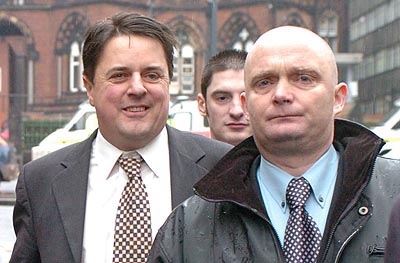 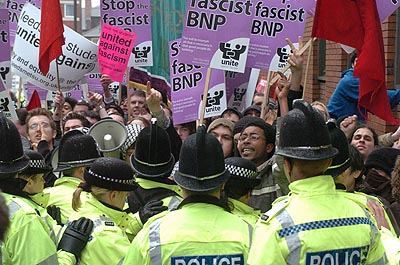 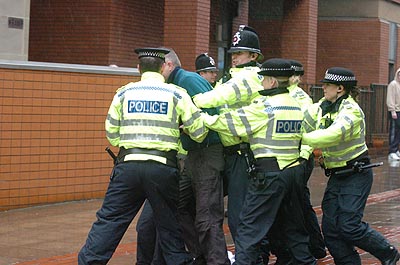 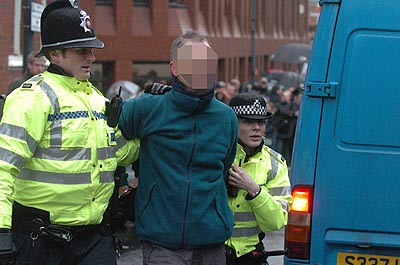 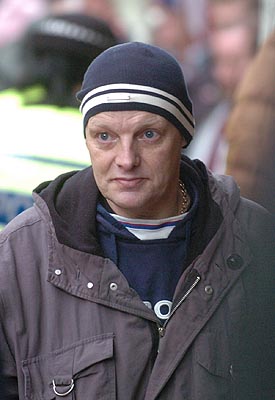 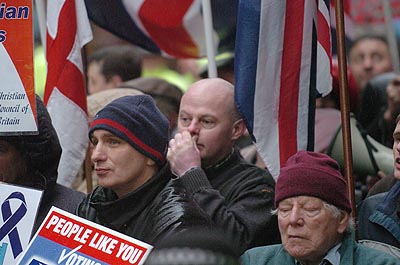 One of the master race lets rip.

Griffin arrived as before with his goon squad who merrily attacked the waiting press or anyone else who got in their way. The Police turned a blind eye to this just like last time leaving many wondering if they were in some way sympathetic to aims and objectives of Britain’s self declared ‘Master race’? They were less oblivious to the waiting anti fascists who they charged into for the crime of chanting anti BNP slogans.

Following close behind Griffin was Collet who it seems intent in following in his Fuhrers footsteps and one day becoming one of Britain’s unimpressive fascist leaders. A bit like Martin Webster or Nicky Crane…

There was no direct action taken against the assembled Nazis who were heavily outnumbered by the counter demo. The exception was one individual who attempted to confiscate one of the BNPs flags ripping it from its pole. The assembled plods sprang into action bundling our heroic (if somewhat kamikaze) antifascist away to be arrested. This was one of the few interesting moments in what was a very tedious outing for all concerned.

At around 1pm the assembled antifascists went and had their rally. This gave the BNP their opportunity to bore all concerned with some insomnia curing speeches. The only bit of light relief came when the BNP ‘vicar’ showed up to deliver one of his barking mad sermons. This time he went one better, striking an important blow for atheists everywhere by banging out a truly tuneless rendition of ‘To be a Pilgrim’. The original composer of the hymn would probably have topped themselves on hearing this had they not already been dead. If the BNP are trying to replicate the success of the Christian right in other countries then they could be in for a rocky ride. The fact that they seem to have set up a new front group under the title “Christian Council of Britain” suggests that this could be the case. Like most white supremacist outfits, many of their core supporters are into Odinism and all those fringe Nordic religions. This way they don’t have to consider the problem that the Christian Messiah was probably what they would describe as black and definitely Jewish. Roll on another split…..

The demos were filmed by Derek ‘Decker’ Dawson the BNP’s answer to Leni Riefenstahl who spent the day hanging out with the assembled media and trying to earwig their conversations. Even if he hadn’t been recognized by anti fascists as a member of the BNP from Burnley it was pretty obvious. The fact that he spent most of his time taking close-ups of the UAF demonstrators was a bit of a giveaway. It should be remembered that many of the images on ‘Red Watch’ are in fact stills taken from video. The BNPs opponents should consider this the next time they spot this inbred cretin filming them.

Finally it should be pointed out that the earlier reference to former NF leader Martin Webster is not intended to give credence to his claim that he had a homosexual affair with Nick Griffin in the late seventies. The fact that Griffin (who is loaded) has refused to sue Webster over the claims is immaterial. The BNP say that when they come to power being gay will become illegal. So please remember in the meantime that their fixation with shiny boots, leather coats and shaved heads is unrelated.