Here's a absolute beauty for those of you who like the skies above Google Earth filled with black helicopters: what exactly was going on at Glasgow Prestwick airport the day the Google sat passed over? 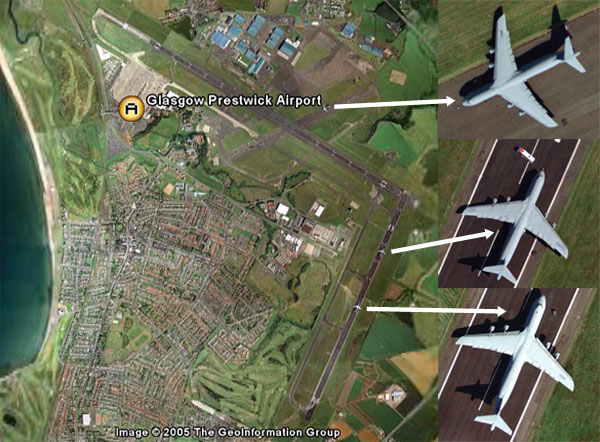 What we've got here is three USAF C-5 Galaxies sitting on an otherwise virtually deserted airport. Thoughfully, the local bus company has in one case nipped out to pick up passengers, as can be seen.

All of this caused a small flurry of emails from readers because the Scottish National party yesterday published a dossier:

Naturally, the SNP is not very happy about any of this. Spokesman Angus Robertson MP said: "There is disquiet across Europe about this whole issue. This report gives worrying details about alleged rendition flights through Scotland. The planes in question have been subject to diplomatic and parliamentary inquiries in different countries. This report establishes that they did pass through Scottish airports."

So, has Google Earth given the SNP the ammunition it needs to go after the spooks? Sadly not. The aircraft in question are, our investigations suggest, carrying President Bush's personal fleet of limos and other assorted kit that the average US prez needs when attending a G8 summit. The images, therefore, were taken in July 2005 - the summit taking place on 6-8 of that month.

You can find more info about the quite astounding lengths the US went to in order to prevent Mr Bush getting a cap popped in his ass in a pre-G8 Scotsman piece.

http://news.scotsman.com/scotland.cfm?id=545682005
As the paper notes: "Prestwick has been chosen as the main arrival airport for the world leaders because it is more difficult for protesters to get to than Edinburgh or Glasgow."

So there you have it. The huge security operation did not, however, stop crack teams of planespotters getting to Prestwick. Have a look here for a nice pic of one of Bush's limo delivery vehicles.