Scotland after the G8

Activism in Scotland experienced a boost in the months following the G8.
Two social centres – Saorsa (gaelic for “freedom”) and Chalkboard opened in Glasgow, and the Indymedia Scotland Infoseed Hacklab in Edinburgh.
The legal support group observe the court cases relating to the G8 [1 | 2 | 3 | 4 | 5 ] and provides support for the defendants.
The Campaign to Save the Cameo was successful and the privatisation of council housing could be prevented [1 | 2 | 3 | 4 | 5 ].
The Glasgow based initiative Make Borders History continued after the G8 in Glasgow as Open Borders Glasgow with direct actions to prevent deportations and morning raids [ 1 | 2 | 3 | 4 | 5 | 6 ].
The Zapatista Solidarity groups raise publicity and prepare enthusiastically for their big solidarity party on the 16th of february for their twinned community in Chiapas [ Edinburgh Chiapas Solidarity Group | 1 | 2 | 3 ].

In an effort to Stop Climate Change and prevent further roadbuilding for individual transport, JAM74 and Friends of the Earth Scotland stopped the building of the M74 Extension, south of Glasgow, which would also be leading through the Cre8 Community Garden, with a legal challenge.
The main action momentarily is the resistance against building the Dalkeith Bypass through a big park acting as a wildlife resort, recreational facility, part of Edinburgh's Green Belt and fields for animals. The campaign includes an unlikely liason of a citizen campaign “Save Dalkeith Park”, ecowarriers occupying the trees, and resistance in the Scottish Parliament and beyond. Last Monday, however, a specialist team started evicting the four protest camps. Despite three protesters slowing down the eviction by nearly a week with refusing to give up their hiding place in a tunnel, the eviction of the last and main protest site is anticipated to start today. [ 1 | 2 | 3 | 4 | 5 | 6 | 7 ] 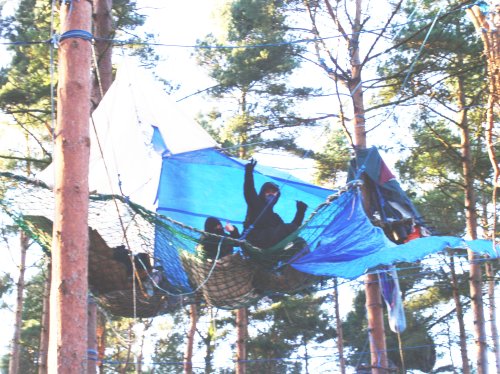 protest against building of the Dalkeith Bypass through a park