A report of Saturday's anti-asbo action and details on the next organising meeting. 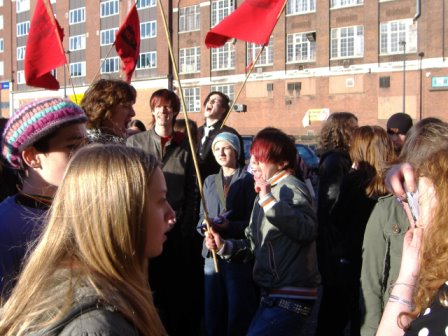 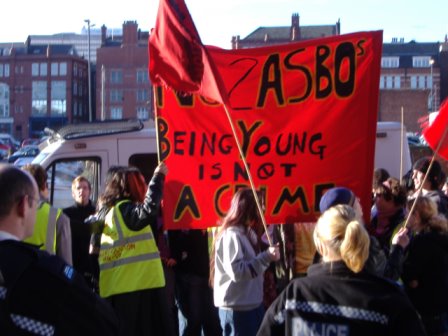 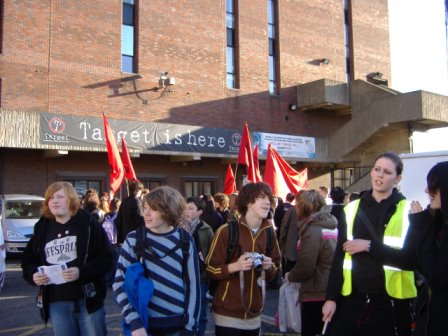 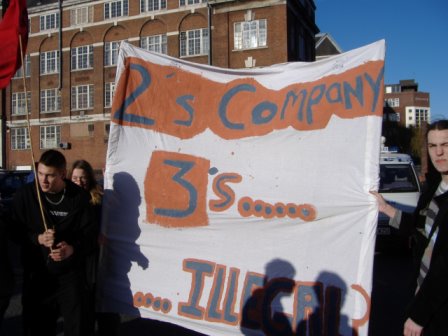 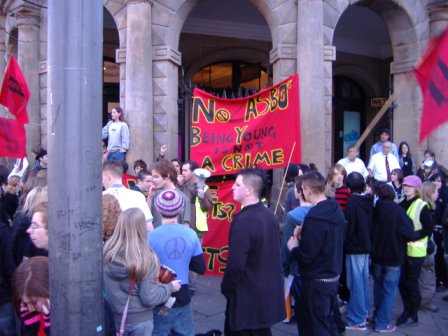 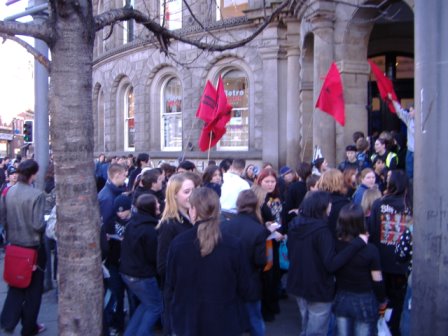 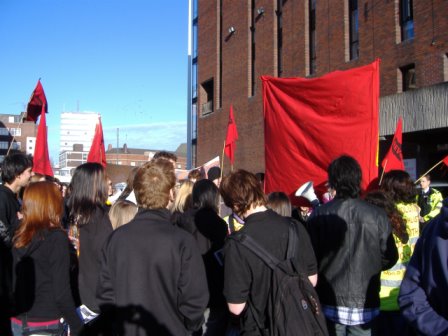 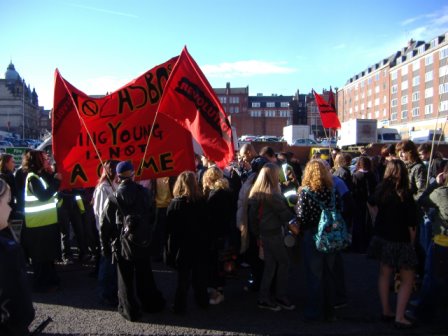 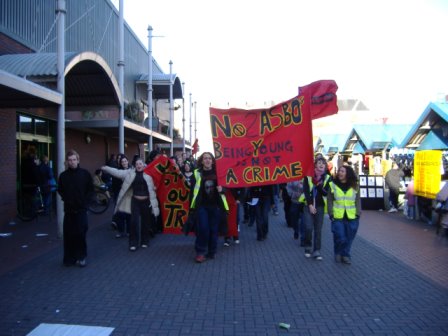 Being Young Is Not a Crime: Anti-ASBO demonstration 21/01/06

On Saturday January 21st around 150 youth held a demonstration against the proposed dispersal order that the council are planning to place on Leeds City Centre. The demonstration has come out of anger from young people who use the city centre at weekends, and would be the target of such a dispersal order. Over the last three weeks there have been several large meetings attended by both young people angry at the council’s plans and members of socialist youth organisation Revolution.

At an organising meeting two weeks earlier Revolution members had proposed a march alongside the suggestion of a sit-down protest outside the corn exchange from others present at the meeting. The decision was voted on, and the meeting came to the agreement that at this stage a march on Saturday was the best way of raising the issue publicly. Whilst people at the meeting were in favour of taking direct action in opposition to the council, it was decided that at this stage, such an action would be easy for the police to target, and would crush our campaign before it had started.

The demonstration began from outside the Corn Exchange, with people assembling from around 1.15pm. The plan had been to set off at 2.00pm, allowing time for the crowd to build up. We decided to take a route through the main shopping area on Briggate and down the Headrow, From there we would protest outside the central police station, as harassment by the cops is already a big issue, even though the dispersal order is yet to be bought in. After that, we would finish with a rally outside the corn exchange.

Whilst assembling at the corn exchange around 1.30pm, one of the stewards (elected by a meeting the previous weekend) reported that a corn exchange security guard had rung the police, On hearing this, the stewards made a decision to march fifteen minutes earlier than originally decided so as to avoid a stand-off with the police, who would have almost certainly tried to prevent the march from leaving.

There were several different banners, prepared at a practical session the previous week, reading; ‘NO2ASBOs – Being Young Is Not A Crime!’ ‘Whose Streets? Our Streets!’ and ‘2’s company… 3’s Illegal’ (taking a knock at the dispersal order allowing police to break up or arrest groups of more than three people) Protestors gave out leaflets outlining the our opposition to the proposed dispersal order, and placing demands for free facilities to be used by young people in the city centre. As the march set off towards Briggate we were lively and militant, with two protestors bringing drums, and the rest of the crowd chanting ‘ASBOs? No Way!’, Whose City? Our City! And ‘ASBOs waste of time, being young is not a crime!’

There were still no police present as we arrived at the junction between Briggate and the Headrow. Given this, the decision was made for the march to block the road rather than stay on the pavement. A couple of minutes later two police officers arrived and told us that we were breaking the law by marching on the road and that we must disperse. Their attempt to disrupt our action failed as two stewards took them aside, and everybody else marched on to Millgarth police station. Once outside, we stood chanting and drumming before heading back to rally outside the corn exchange.

As the demonstration came to a close passers by stopped to hear speeches being made, and to take leaflets putting forward our cause. The assembled protestors made it clear that this was not the end of the campaign, but the beiginning, and should the dispersal order be bought in mass civil disobedience would be used to break the order and protect our rights.

All in all it was successful day’s work, and bought the campaign good publicity among the people in Leeds city centre on Saturday. At a de-briefing afterwards, it was decided that an organising meeting to decide on where we will take the campaign next is to be held on Saturday January 21st. This is going to be at the Adelphi hotel between 2pm and 4pm (with assurance from the manager that that they will allow U18s on to the premises) For those people who do not know how to get there, we will be meeting up at Corn Exchange at 1.45pm to take people down.

If you, your residents association or your trade union branch want to oppose the city centre dispersal order, or have information about dispersal orders and ASBOs in Leeds, please come to the meeting on Saturday and help us build the campaign.

Thanks for pointing that out LordRich.... the organising meeting at the Adelphi hotel is going to be on Saturday 28th of January!