Taser International, the Scottsdale Arizona manufacturer of the extremely controversial “X26 Advanced Taser” electro-muscular-disruption “stun” gun was thrown a bone last week; abet one they may still choke on. 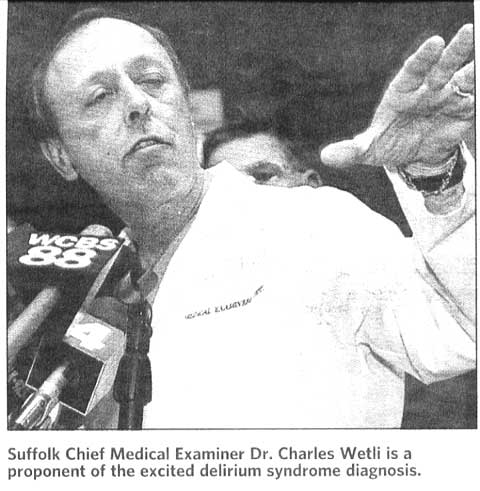 Regarding the on-going multi-million dollar lawsuits filed by the families of David Glowczenski, the efforts to redress the Southampton Village Police Department and the County of Suffolk in New York, has stumbled. The Suffolk County Chief Medical Examiner Dr. Charles Wetli has declared that Glowczenski died because of a condition called “Excited Delirium”.

The American Medical Association does not recognize it as a cause of Death. In fact, Dr. Wetli has publicly stated that he only learned of the obscure descriptive from a psychiatrist. Even though many experts in the field believe the condition may not even exist, Dr. Charles Wetli has wrapped himself solidly with it, even though he has also stated publicly the he does not fully understand how excited delirium causes death yet he has cited it “once or twice a year,” mostly in incidents involving in-custody deaths. The Suffolk County Department of Health declined to detail the number of deaths attributed to the questionable condition due to confidentiality laws.

Dr. Ronald O’Halloran, the chief medical examiner of Ventura County California has stated that he more often than not, attributed such in-custody deaths to asphyxiation. In almost a dozen such incidents that he has personally investigated, Dr. O’Halloran has never attributed any to the mystery condition called excited delirium. He also stated that “it’s clearly an area of controversy.” Just like civil and criminal court judges, medical examiners are part of a tight knit group that socialize at trade shows and technology conferences, and they strongly dislike offering a counter opinion regarding their colleagues formal opinions.

One medical examiner has stood up against the apparent misuse of excited delirium diagnoses, also referred to as hyper-mania or acute psychosis in over 100 in-custody deaths nationwide. Dr. Werner Spitz of Michigan says that it is cited as the cause of death all too frequently and is misapplied by convenience. Dr. Spitz, who has not been retained by the Glowczenski family states that many of these deaths linked to the condition are actually the result of asphyxiation. “They died because they cannot breathe”. Spitz continued, “Why doesn’t excited delirium happen when somebody is not restrained? It means it was a coincidence? I don’t believe in coincidences!”

Even though the official autopsy found that the police officer’s efforts to subdue Glowczenski were not to blame, there was no apparent organic cause detailed. The official version listed “acute exhaustive mania due to schizophrenia.” It also detailed “blunt impact trauma” to arms, legs and abdomen as well as numerous burn marks to the subject’s skin, but no sign of “major acute traumatic injury”. Experts hired by family members attacked the formal report. Rockland County New York Medical Examiner Dr. Lone Tanning cited “extensive evidence of excess force” used by the officers in their application of “non-lethal” force. Tanning stated for the record that Glowczenski died from repeated Taser (M-26 Advanced Taser) shock cycles, blunt force injuries and repeated exposures to OC Pepper Spray. She also said she believes that Glowczenski being handcuffed and having his ankles shackled while a “large man kneeled on his back” strongly questions the stated cause of his death.

Dr. Wetli stated that he has every intention to provide expert courtroom testimony, lecture and write papers for publication, on the subject he now envisions as the predominant cause of death in habitual drug users and those of diminished mental health. His efforts will continue the long trail walked by Dr. Robert Stratbuker, and his efforts to promote the now questionable findings of the original medical studies first commissioned by Taser International when the company was founded. This plays well with Taser’s CEO, Rick Smith and his efforts to re-invent his company’s flagship product as one that may cause death, but only in those persons who where predisposed to it anyway.

February 4th, 2004 Newsday / Long Island Section
MAN’S DEATH STILL A MYSTERY, HAD SCUFFLED WITH SOUTHAMPTON POLICE
By Andrew Smith and Samuel Bruchey
STAFF WRITERS
A preliminary autopsy report has found no signs of physical trauma or an obvious cause of why David Glowczenski died Wednesday while scuffling with Southampton Village police. While a police official said the report showed that officers used little, if any, physical force, Glowczenski's family tried to make sense yesterday of what led to his death. Glowczenski, 35, collapsed and died during an encounter with police near his Layton Avenue home, shortly after his parents called police because he was acting bizarrely. Officers used Chemical Mace and a stun gun to subdue him. "An unnecessary tragedy has occurred," said his younger sister, Jean Glowczenski, 30, of Southampton. "My parents called the police because he was distraught. He was on his way to church to pray." On Wednesday morning, Glowczenski's parents called police to report their son was acting irrationally. By the time police arrived, however, he was calm. An hour and 20 minutes later, the parents called again. About the same time, a neighbor called police and complained that Glowczenski was staring in her window from the sidewalk, said Det. Lt. Jack Fitzpatrick, commanding officer of the Suffolk police homicide squad. Police found him "walking down the street, screaming unintelligibly," Fitzpatrick said. The first officer to respond was a female officer based at a nearby Catholic school, Fitzpatrick said. Three other officers showed up within seconds, while the first officer unsuccessfully tried to get Glowczenski to calm down. He then shoved the female officer, and all four officers struggled to subdue him. Fitzpatrick said officers did not punch or kick Glowczenski, but they did shoot a Taser and Mace at Glowczenski when he became belligerent, and they handcuffed him, Fitzpatrick said. Tasers send out an electrical charge and are considered nonlethal. Officers called an ambulance to treat him for the Mace. Until it arrived, he lay on the ground, screaming, Fitzpatrick said. Just as the ambulance arrived, he stopped breathing. Fitepatrick said a preliminary report from the medical examiner's office was "somewhat inconclusive” Village police did not respond to requests for comment. The report also noted no heart problems, Fitzpatrick said. However, he said that Glowczenski had abruptly stopped taking psychiatric medication, apparently after reading about the drug's side effects in an advertisement. "That may have caused the episode." Fitzpatrick said. Glowczenski had been hospitalized before, at Kings Park Psychiatric Center and a hospital in Greenport, Fitzpatrick said. GIowczenski's criminal record included only a conviction for driving while intoxicated, but Fitzpatnck said village police had responded often to complaints at the house. "He was quite familiar to them," he said.

February 5th, 2004 Newsday
Southampton Man Dies after Arrest
By Joseph Mallia
STAFF WRITER
A Southampton Village man died yesterday after village police officers, responding to a request for help from members of the man's family, used Chemical Mace and a stun gun to subdue and arrest him, Suffolk County Police said yesterday. Village police investigators could not be reached to comment yesterday, but the county police, who are investigating the death, gave the following account: The family of David Glowczenski, 35, called the village police about 10:31 a.m. yesterday, asking them to come to their Layton Avenue home "because he was acting irrationally," a Suffolk Police statement said. Before the police arrived at the home, Glowczenski set out on foot. "Police encountered him on North Main Street and attempted to calm him down," the statement said. "Glowczenski pushed a female officer to the ground and fought with assisting officers who were trying to control him." The village police used Chemical Mace and a Taser to subdue the "emotionally disturbed" man as he continued to fight, and he was eventually handcuffed. "A short time later, Glowczenski stopped breathing," the statement said. Police officers called an ambulance and started to perform CPR on the man, who was taken by ambulance to Southampton Hospital and pronounced dead at 11:19 a.m. His body was taken to the county medical examiner's office, where an autopsy will be done to determine the cause of death. Glowczenski's family declined to comment last night. "I can't really talk," said his father, Theodore Glowczenski. "Things are unsettled right now."

February 7th. 2004 Newsday
FAMILY SEARCHES FOR WITNESSES IN MAN’S DEATH
By Mitchell Fieldman
STAFF WRITER
The family of David Glowczenski, who died Wednesday morning- less than an hour after being taken into custody by Southampton Village police, is asking anyone who may have seen him being arrested to contact them. “This is a death that did not have to happen,” his sister, Jean Glowczenski, said Friday. "We're asking if anyone saw the events, please come forward and contact us." "He was handicapped. He had a psychological disorder," Glowczenski's father, Theodore, said Friday. But Jean Glowczenski said her brother had lots of friends and was well-known in the community. "He liked music," she said. The family was making funeral arrangements Friday with the J.M. O'Connell Faneral Home in Southampton. There were few neighbors who saw Glowczenski leave his house on the day of the incident. Many of the homes on his part of Layton Avenue are lived in by people from New York City who come out on weekends. Suffolk police were called by Glowczenski's family, who said he was acting irrationally. He then became involved in a scuffle with a female officer. The homicide squad said three other officers responded within seconds, and that Glowczenski was eventually handcuffed and an ambulance called. They said Glowczenski stopped breathing about the same time the ambulance arrived. He was rushed to Southampton Hospital, a few minutes away, where he died. A preliminary report from the Suffolk Medical Examiners office on the cause of death was inconclusive.

About the author:
“TASER IMHO” is the pen name of a freelance reporter living in Arizona. Having followed the exploits of Taser International and its founding family the Smiths for several years, the decision was made to put forth in this media an opinion on the subject. Often critical and controversial, the facts exposed and the sources for them are currently being investigated by private investigators hired with Taser’s approval to track these articles back to their source. All attempts so far have failed. The 1st amendment to the Constitution affords all of us protection from governmental interference and ensures us the right to speak our mind.