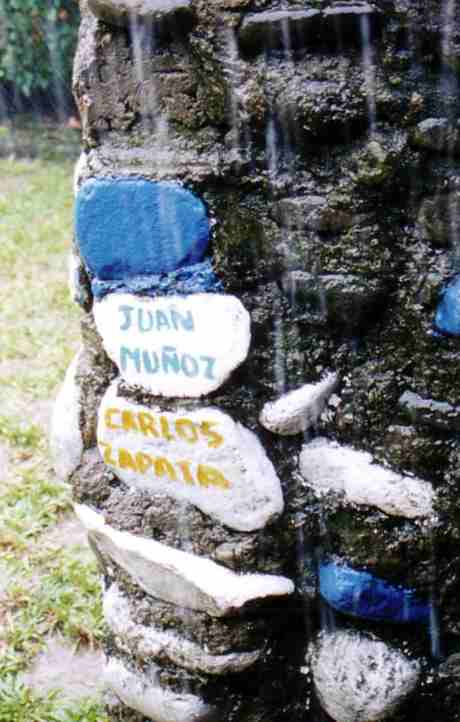 
Amidst all the fear, all the pain, all the anguish, a sentiment exists that unites us all, that is dignity. Our dignity will not allow us keep silent. This is why they have to assassinate us with our heads held high.

The following piece of writing is evidence of the fruits of our assassin state.

San Jose's Monument dedicated to all those killed in the Colombian civil war.


Dear Indymedia readers,
Before you read the article below, I want to ask of your help.
I am a former volunteer with Peace Brigades International, a human rights NGO who accompany a number of human rights defenders and peace communities in Colombia. I worked in the peace community of San Jose de Apartado for a year. The San Jose Peace Community was born in February 1996. The members do not carry arms. They do not drink alcohol. They do not drink coca-cola or comsume Nestle products. They promote peace, community living, organic farming and fair trade. The members have created a nonviolent peaceful community in the midst of a civil war. 'You are entering a peace zone' say the large flags at the entrance to the community. This community of poor farmers is currently being exterminated by the Colombian government. WHY? Because the community tell the world that the government supports the illegal right-wing paramilitaries. Because the community write public reports about the violence of the Colombian army. Because the community refuse to sell their jungle land to multi-national organisations so it can be exploited and destroyed for financial gain.
The Irish Dept of Foreign Affairs even met with 2 leaders of the Peace Community last August. I have met with them and spoke to them a number of times in relation to the extermination of the peace community. They need to be reminded again that it is their duty to protect this community.

Can you please phone the Dept of Foreign Affairs and ask to speak to Adrian Fitzgerald, who deals with Colombian Affairs. Otherwise Margaret Stanley, the Deputy Director of the Americas Section. The number is 01 4082137. Ask them to contact the Colombian government immediately regarding this matter. Send them this article by email.

Frank.flood@dfa.ie
Thank You For you support
Cearbhuil Ni Fhionnghusa
The Friends of San Jose Ireland.

At around 7a.m. on January 11th, Edilberto went to bed at his house in Arenas Altas. His 12 year old son was with him. On the morning of January 12th, the army arrived very early at his house and forced him to leave the house. 20 mins approx from his house in the community farm of Arenas Altas, Edilberto was shot dead by the army. At the same time about 150m from where they kill Edilberto they open fire on a house. The couple, who are members of our Peace Community, managed to escape the grenades and shots the army lanced at them.

Later on Edilbertos son arrives at SanJosesito (current home of many peace community members’) and informs them of what happened. The human rights ombudsman is called by the peace community and when he asks the army what happened, they say they shot a guerrilla who had a radio, a gun and grenades.

At 11am the army carries the body to San Jose and refuse to let the family identify Edilberto. On seeing this, a commission made up of the human rights ombudsman, and members of the family. They arrive at Edilberto’s house at 1a.m and find banners saying Anti-guerrilla 33 Brigade of the army. They also discover 20m from the house, the blood of Edilberto and his brains.

The facts once again tell it all. The same murderers who killed 8 of our members almost a year ago now carry their murder machinery to Arenas Altas when already in November they murdered Arlen Salas the leader of the humanitarian zone. It is obvious that the government is doing everything to get rid of us. In order to justify their acts of terror they label us as guerrilla terrorists, they take us out of our houses, they tie us up, and they quarter us and murder us.
It is obvious the plan is to exterminate the peace community. The humanitarian zones are military targets. The army hunts us down and murders us.

The cheek of the government does not stop here however. Without even one bit of evidence, Gilardo Tuberquia a leader of the peace community has been called for questioning by the Attorney General. In the states eyes, in the eyes of the attorney general, in the eyes of the government, the victims are the murderers and the murderers are the victims. Despite all this injustice, and the fact that the government wants to exterminate the peace community, we will not give in. We will not remain silent and we will hold onto our dignity until the end. Maybe one day we will be left in peace. Maybe one day we will be judged in a fair and just way.

Edilberto, Thank you for everything. Your nine sons will continue your path of resistance , the path towards true justice.