Mulitple battles in many cities as Italian people attempt to stop the construction of the environmentally destructive TAV high-speed train line from being built. They are also fighting against the Winter Olympics in Turin, the games of capital and finance. 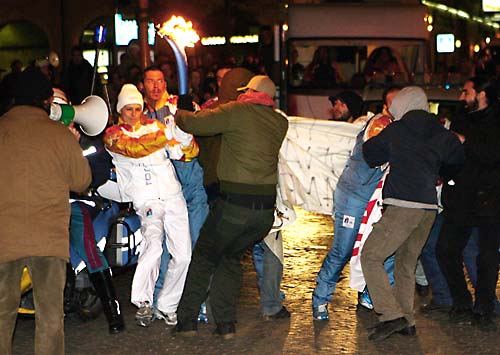 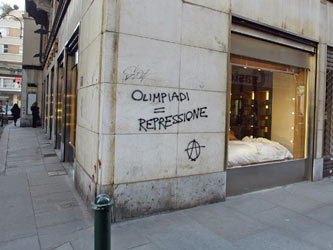 Destroy the games of capital!

TURIN - Several people were hurt on Tuesday when police clashed with protesters as they tried to break up a week-long demonstration blocking work on building a high-speed railway line between France and Italy, authorities said.


Thousands of people have protested against the line through the Val di Susa, north of Turin, which will require a tunnel more than 50 km (30 miles) long under the Alps.

A group of Val di Susa residents have been camping in the village of Venaus for eight days, preventing work starting on a line that will link two of Europe's biggest economies.

At 3:30 a.m. (0230 GMT) on Tuesday, police arrived to clear them out. Protesters said police hit them with truncheons and that about 15 people were slightly injured. The Turin police headquarters said 12 policemen and two photographers were hurt.

"About 200 members of (groups opposing the train) and anarchist groups who were already at the site opposed the operation, and were joined by numerous protesters," Interior Minister Giuseppe Pisanu said in a statement.

Local unions called a strike in response to the evacuation and asked members to gather in a nearby village to protest, despite police having blocked the roads to Venaus.

Later, a group of activists temporarily blocked Turin's Porta Nuova train station, and hundreds of protesters gathered in one of the city's main squares, Piazza Castello, in front of the central police station.

Val di Susa inhabitants oppose the freight link, part of a Europe-wide infrastructure plan, partly because of the environmental damage it would cause. Many want existing train lines to be improved instead.

The people of the Val di Susa also worry that the mountains around them contain asbestos, which could cause health problems as workers drill the tunnel.

An occupation camp in Italy's northern Susa Valley (Val di Susa) which was preventing the construction of a high-speed railway line between Italy and France was violently evicted by paramilitary police Tuesday. 20 people were reportedly hospitalized after clashes, including five police officers. Earlier in the day, residents had blockaded the major highway that runs through Val di Susa and barricaded streets in the valley town of Bussoleno. Workers also went on strike in the nearby city of Turin in solidarity with the struggle.

Residents of the valley have been demonstrating, blocking roads, and launching strikes against the railway project for weeks, opposing the environmental destruction the rail line could cause. Graffiti messages against the railway line and the police occupation of Val di Susa have proliferated throughout the area.

Val di Susa links Turin, host city of the 2006 Winter Olympics, to the Alps, where many Olympic events are to be held in February. The valley is already cut up by a major highway and railway, and the proposed high-speed line will plow through a mountain which contains asbestos and uranium.

Residents of the valley were not dissuaded by Tuesday’s police assault and continued to block the highway today.

During a solidarity demonstration in Turin yesterday, a railway depot was blockaded, and anarchists attacked the car of the President of the Piemonte region, two police cars, and an Olympics store. In addition, a bank was smashed-up, a bonfire was set in the streets, and graffiti messages were left on walls denouncing the Olympics and declaring solidarity with the resistance in Val di Susa. One cop was injured when he was hit in the head with a bottle.

Four anarchists were arrested Monday after briefly grabbing the Olympic torch from Italian track athlete Eleonora Berlanda as the relay passed through the northern Italian city of Trento. Runners escorting the flame snatched it back.

Four anarchists from the nearby town of Rovereto, Massimo, Daniele (Mike), Daniela, and Juan, were arrested and charged with theft, causing injury, violence, and resistance. Comrades of the anarchists distributed leaflets about the arrests and the exploitation, repression and industrial expansion related to the Olympics (the high-speed railway line between Italy and France, the militarization of the cities and valleys, the exploitation of immigrants' labour under threat of deportation, and the advertising of multinational corporations that rob and pillage resources).

Some corporate media outlets mistakenly refered to the anarchists who disrupted the torch relay as "The Disobedient Ones", refering to a protest organization that is not anarchist and which has hostile relations with some anarchists.

The 2006 Winter Olympics are to take place in Torino, Italy, in February.